In the early spring of 1915, Oscar Anderson arrived at Ship Creek.  According to his own count, he was the eighteenth person to land at "Tent City," the temporary settlement on the northern shore of Ship Creek across from present day Anchorage.  He contributed to local commerce by founding the Ship Creek Meat Company, the primary wholesale and retail meat and cold storage operation of its kind in this region of Alaska.  He took pride in the supplies that he provided to early Anchorage residents, food through his market and, also, coal.  He was a co-founder of the Evans Jones Coal Company, which provided coal to Anchorage for over a quarter century as its major energy source. His other contributions included the financial backing as a major stockholder in the Anchorage Daily Times and support for early air transport.

Oscar Frank Anderson was born in Sagerskog, Sweden on June 2, 1883. He immigrated to the United States around 1901 at the age of eighteen with two of his brothers.1 They first settled in Massachusetts but in 1905 the three brothers decided to go their separate ways. The older brother returned to Sweden, while Oscar and his younger brother decided to move west to Seattle, Washington.2

In Seattle they discovered that there was very little work but made ends meet by doing odd jobs and living in a boarding house, which was owned by a Swedish woman named Elizabeth Katherine Jonsonn (or Johnson). On December 5, 1905, Oscar and Elizabeth were married at the King County Courthouse in Seattle, Washington.3

In the aftermath of the 1906 San Francisco earthquake and fire, the brothers were lured south with the prospect of abundant work rebuilding that devastated city. Shortly after his arrival, Oscar received a message from Elizabeth, which prompted his return to Seattle. Oscar and Elizabeth had three children-a son (Maurice) born in 1907, a daughter (Ruth) born in 1909 and another son (Vincent) born about 1913.

Arrival in Alaska and Business Interests

In 1915, Oscar decided to head for the proposed new town of Anchorage and start life anew in Alaska. Leaving the family in Seattle, he planned to buy some lots at auction, build a home, and then send for the family.

He first arrived in Seward in March 1915 and set out over the old Dalton Trail headed for Ship Creek (now Anchorage). By Anderson's own account, he was the eighteenth person to set foot in "Tent City," a temporary settlement located on the northern shore across Ship Creek from the present downtown Anchorage. Anderson was part of the first wave of an estimated 2,000 arrivals, many of them immigrants, particularly Scandinavians, who arrived as part of a stampede triggered by the prospect of being employed as construction workers on the Alaska Railroad.

With the purchase of land, Oscar Anderson established roots in the Anchorage townsite. His first job was cutting wood on what is now Government Hill. The Alaskan Engineering Commission (AEC) put an end to that activity. Within a few weeks, Anderson and a friend named Jensen opened the first cold storage operation at "Riverside," the temporary tent settlement; it became the primary meat packing company in the region. Anderson took the first available boat back to Seattle to purchase equipment for the cold storage plant and established the Ship Creek Meat Company in June 1915. He purchased a downtown lot and erected a building on Fourth Avenue where the Ship Creek Meat Market was relocated in the fall of 1915. Live cattle were shipped in from Seattle in order to have fresh meat for sale. For several years, he kept his own corrals and slaughtered livestock as needed. The Ship Creek Meat Corporation was the largest meat outlet in Alaska, serving both retail and wholesale customers along the Railbelt and Upper Cook Inlet for many years. The Ship Creek Meat Market continued operation on Fourth Avenue into the 1950s.4 The building still stands on Fourth Avenue and is occupied by Stewarts Photo Shop (531 West 4th Avenue). The cold storage area with the heavy refrigerator doors is still in the rear of the building.

Oscar Anderson's next move was to build a home for the family, which he did with two carpenter friends, "Stucco" Johnson and Aaron Wickland. This simple, frame bungalow style house, built in 1915, measures approximately 20 x 40 feet, and has one and one-half stories. In the fall of 1916 Oscar brought the family up from Seattle, and they all settled into the new home, which is reputed to be the first permanent residence to be built following the Townsite auction of July 10, 1915. The house, now known as the "Oscar Anderson House," has been restored and relocated a short distance from where it was originally built.

In 1921 Oscar Anderson, along with Evan Jones, Isidore "Ike" Bayles, A. A. Shonbeck and two others, organized the Evan Jones Coal Company at Jonesville, on Wishbone Hill, just north of Palmer. Later, Anderson became the company's president and general manager. He was the last of the original developers and owned the mine until he sold out to Harry Hill in 1944. Oscar often said he "supplied food and fuel"--the real necessities--to the residents of Anchorage. The food was through his meat market and the fuel was the coal from the Jonesville mine, which was transported on the Alaska Railroad and provided a major source of energy for Anchorage for over a quarter century.5

Oscar Anderson, along with A.A. Shonbeck, Gus Gelles and Isidore "Ike" Bayles, also organized the first airline operation in Anchorage. It was known as Anchorage Air Transport, Inc., and Russel Merrill was hired as the chief pilot. In 1929, just prior to Merrill's being lost on a flight to the Nyac Mine near Bethel, the company was sold.  Anderson joined Bayles and local drug store owner Z. J. Loussac in the development of the Anchorage Daily Times newspaper. They were the first and last stockholders until 1935 when the newspaper was sold to Edward Anton Rasmuson, who installed his son-in-law, Robert Atwood, as editor. Anderson ventured into the oil drilling business in Yakutat, and held a financial interest in the A. J. Mine in Juneau. He owned and operated a saw mill on Knight's Island, cutting and milling ties for the Alaska Railroad. Anderson's life resembled that of Austin E. "Cap" Lathrop, an Alaska industrialist and business magnate. Both men led productive lives in Alaska. They were courageous, resourceful, and rugged individualists who came and stayed o sow what other generations might reap.

Very little is known about Oscar Anderson's first wife, Elizabeth, who was the mother of his children. Elizabeth was born about 1876 in Sweden and immigrated to the United States in 1902. The couple divorced shortly after the children left school, and Mrs. Anderson moved back to Seattle. Anderson married again to a woman he met on a trip to California with his friend Charley Frye of the Frye Meat Packing Company in Seattle. Her first name was Jean, and she married Anderson in 1931 in Anchorage. This was a short-lived marriage and ended in divorce in 1934.6 In 1938, they were remarried in Everett, Washington and divorced again in 1939.7 Two years later they were remarried in Anchorage, but later divorced.

Anderson then met Elizabeth Anna Peterson, an English teacher who traveled to Anchorage to visit family and friends. She and Anderson were married on December 3, 1940 in Anchorage. The couple lived in the family home at the foot of Fourth Avenue and M Street until shortly before Anderson's death in 1974. She then moved to Centralia, Washington and lived there until her death in 2003. Elizabeth Peterson was born on March 11, 1905 in Rock Springs, Wyoming to Bert and Ann "Yardingi" Peterson. The family moved to Tono, Washington, located in southern Thurston County, where her coal miner father found work. Elizabeth Peterson graduated from Tenino High School, located five miles south of Tono, in 1924. She attended Western Washington Teacher's College in Bellingham and taught English in Everett and Dahlia, Washington, for more than twenty years.8

Oscar Frank Anderson passed away in Olympia, Washington in 1974 at the age of ninety-one. He is buried in the Pioneer Tract of the Anchorage Memorial Cemetery. Oscar Anderson's son, Maurice, passed away in Montana, and son Vincent passed away in Seattle, Washington. Until 2001, his daughter, Ruth Burgess, was still living in Seattle.9

Elizabeth Anna Peterson Anderson, Oscar Anderson's widow, donated the 1915 Anderson home to the Municipality of Anchorage for historic preservation purposes in 1976. In order to save the building, the Municipal Assembly provided necessary support through an emergency ordinance in 1976. Now called the Oscar Anderson House, the building was moved some sixty feet to municipal land adjoining Elderberry Park, located on the west end of downtown Anchorage. The house was placed on the National Register of Historic Places in 1976. 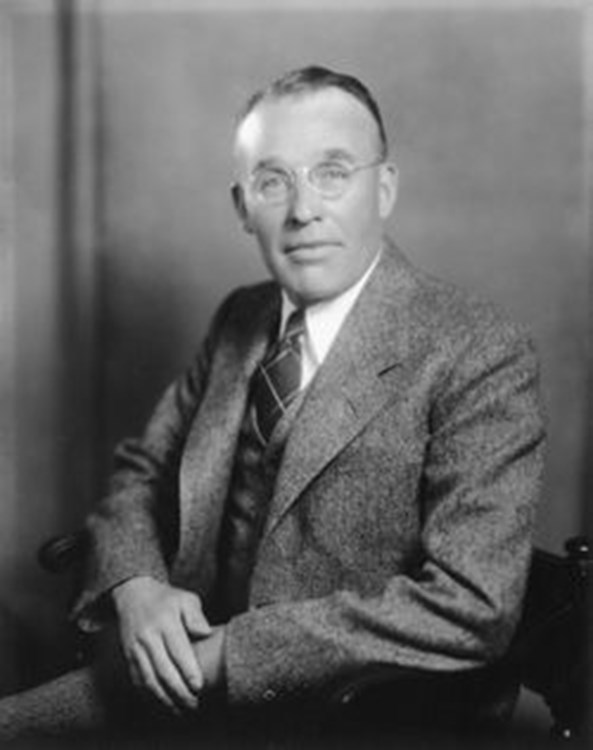 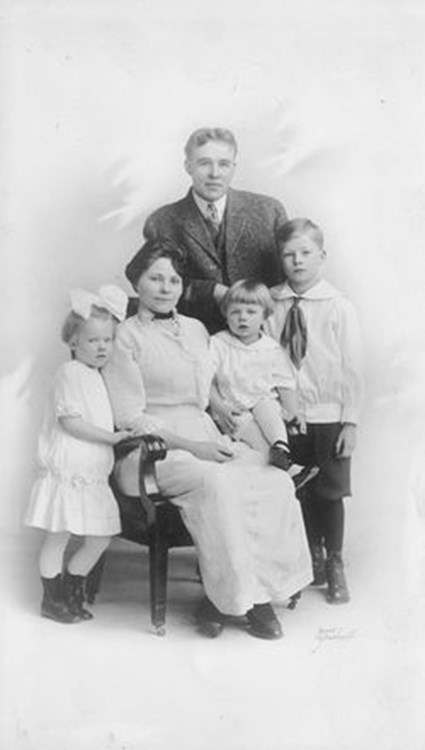 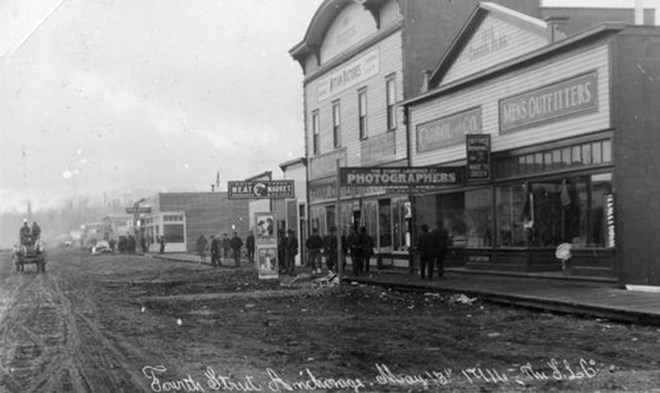 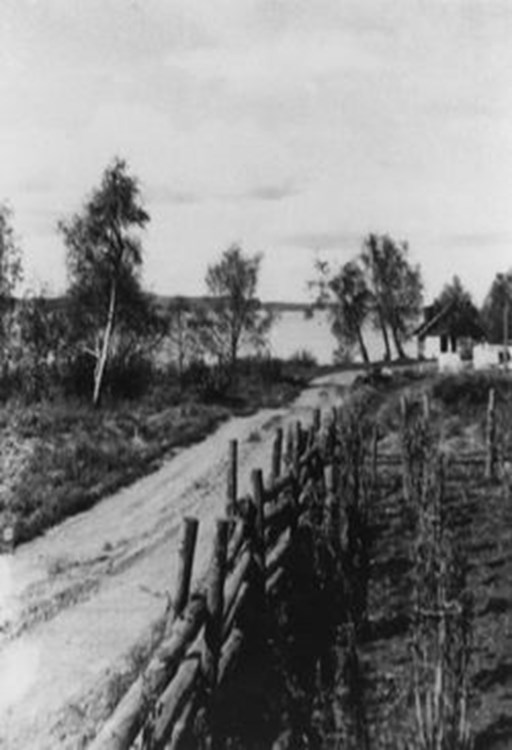 The Anderson home at it's original location--over the hill at the end of Fourth Avenue, Anchorage, by Cook Inlet. 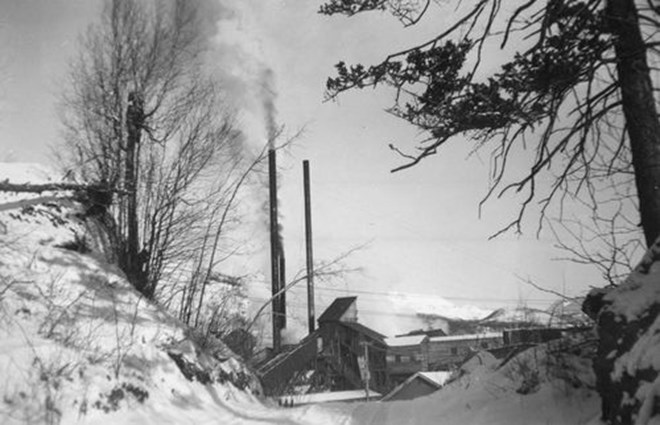 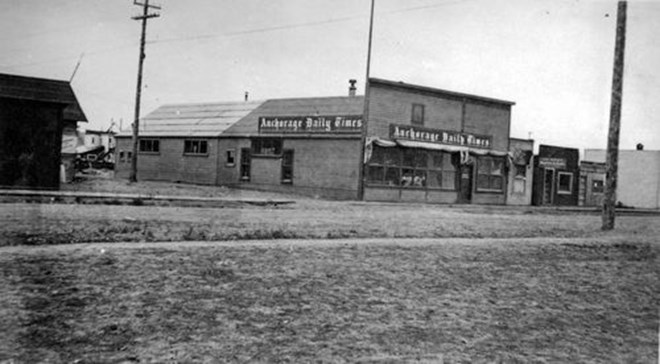 6"Complaint," October 13, 1934, Case No A-880, Oscar Anderson v. Jean Anderson, Civil Case Files, 1915-1950, Box 41; U.S. District Court for the District of Alaska, Third Division (Anchorage), Records of the District Courts of the United States, Record Group 21, National Archives and Records Administration, National Archives at Anchorage. The complaint gives December 30, 1931 as the marriage date. The "Judgment," December 24, 1934, gives December 24, 1934 as the date of the divorce. In 2014, these federal territorial court records were transferred to the Alaska State Archives (Juneau, AK).