From the first day he arrived in Anchorage, then a town of about 2,200 people, on June 15, 1935, Robert Bruce Atwood, known as Bob Atwood or Robert Atwood, was destined to become a community leader.1  The 28-eight year old Atwood was the new editor of the local newspaper, the Anchorage Daily Times (changed to the Anchorage Times in 1975), and he was eager to make a little newspaper bigger.  People looked to him to see what this new owner of the newspaper could do.  They soon found out, as he became active in every aspect of the community and business life.  He proved himself by hard work and by bringing to Anchorage the professional skills he developed at his first newspaper jobs in Massachusetts and Illinois.

Robert Bruce Atwood was born in Chicago, Illinois on March 31, 1907, and was raised in the suburbs of Chicago.  He graduated from New Trier High School in Winnetka, Illinois.  He was expected to become a lawyer like his father or a geography professor like his uncle. Instead he went east to Worcester, Massachusetts, to study journalism at Clark University.  To pay his expenses, he ran the school’s print shop and worked as a night reporter for the Worcester Telegram.  He graduated with a B.A. in 1929.  In 1930 he moved back to Illinois and worked as a court reporter for the Illinois State Journal in Springfield.

While living in Springfield, Bob Atwood met a young social worker from Alaska, Maud "Evangeline" Rasmuson, who was born in Sitka in 1906.2  In 1932, Evangeline and Bob married and went to Worcester where the two of them worked for his old newspaper, the Worcester Telegram.

In 1935, Evangeline’s father, Edward A. Rasmuson, who was President of the Bank of Alaska, informed them that the local Anchorage Daily Times was available for purchase.  They accepted the opportunity and that began the saga of Bob Atwood. Under ownership of the Atwood family, the paper grew from a circulation of 650 and five employees to a circulation of almost 50,000 with 400 employees.  In 1974, the Times entered into a joint operating agreement with the Anchorage Daily News to reduce costs, but due to a conflict the agreement was ended through arbitration.  In 1979, a circulation war between the two papers began after the McClatchy Company purchased the Anchorage Daily News.  The war led to a financial strain for the Anchorage Times, and Atwood sold the paper in 1989 to the VECO Corporation.  The Anchorage Times, after its 92-year history of service, closed in 1992.3

Alaska achieved statehood through the efforts of Bob Atwood and others such as E.L. “Bob” Bartlett, William A. “Bill” Egan, Ernest Gruening, George H. Lehleitner, Fred Seaton, Ted Stevens, and C.W. “Bill” Snedden, the publisher of the Fairbanks Daily News-Miner.  Beginning in the mid-1940s, the Anchorage Times was the most vocal proponent for statehood.

Atwood and Snedden have been given much of the credit for being the catalysts for bringing the Alaska statehood movement to life and for being the most influential newspapers in the statehood cause.  Atwood was Chairman of the Alaska Statehood Committee, an official committee of eleven persons who publicized and educated the public on statehood both in Alaska and in the Lower 48 states.  This work eventually led to the statehood miracle of 1958 – the passage of the Alaska Statehood Act of July 7, 1958 (72 Stat. 339) – which created the 49th State on January 3, 1959.4

Known for his lively editorials, Bob Atwood was largely responsible for effecting many changes in Anchorage and Alaska.  Whenever the federal government was planning to spend funds, build structures, or create agencies in Alaska, he wanted them located in Anchorage.  The impact of these accomplishments persists into the present day.  He used innovative measures which led to the approval of construction funds for a new concrete federal building (605 West 4th Avenue) to house the post office and other federal agencies, which opened in 1940. Atwood worked with Mayor Zachary "Zach" Loussac to locate the new Alaska Native Health Service hospital in Anchorage instead of Palmer in 1953.

After World War II, Atwood was the prime mover behind a local campaign to obtain federal funds to build the Anchorage International Airport (now the Ted Stevens Anchorage International Airport) and worked behind the scenes to obtain the necessary congressional funding.  He also helped persuade international carriers to make Anchorage their base on the great circle flights to Asia and trans-polar flights to Europe.  He helped found Alaska Methodist University, now Alaska Pacific University.  His relationship with the military in Anchorage was one of mutual goodwill and support from his newspaper.  He was a driving force behind the development of Alyeska Ski Resort and a supporter of the Matanuska Colony development, which coincided with his arrival in Anchorage in 1935.5  Bob and Evangeline Atwood were part of a group of leading citizens invited by Elmer E. and Mary Louise Rasmuson to help finance the construction of the Anchorage Museum of History and Art (now the Anchorage Museum at Rasmuson Center), which opened in 1968.6

Not all of Atwood’s campaigns were successful.  He was a staunch supporter of moving the state capitol from Juneau to southcentral Alaska, which was becoming the population center of the state.  Beginning in 1959 and continuing into the 1980s, Atwood and the Anchorage Times argued for the move, which was voted on several times in statewide elections.  The vote to move the capital passed; the vote to pay the high cost for the move failed, and the capitol remains in Juneau.

Bob Atwood’s other business interests included investments in oil leases. In the early 1950s, a hundred wells had been drilled in Alaska but no one had found any substantial amounts of oil.  Recalling his geologist friends’ optimism about Alaska’s oil potential, Atwood pooled his money with a small group of investors, who became known as “the Spit and Argue Club,” during their luncheons at the Elks Club in Anchorage.  In 1957, commercial quantities of oil were discovered at Swanson River on the Kenai Peninsula, the first major discovery in Alaska.  The discovery launched an invasion of oil explorers and opened up dozens of new oil fields in the Cook Inlet area. This discovery also furthered the cause for Alaska statehood by proving that the territory had the economic means to support itself.  When oil executives began arriving in Anchorage in the 1960s, the Atwoods made sure that they were enthusiastically welcomed so that Anchorage would become the administrative headquarters for the Alaska oil industry.7

Bob Atwood helped organize the original Anchorage Rotary Club in 1941, and served as president in 1944-45. He joined the Anchorage Chamber of Commerce in 1935, and served as president in 1943 and 1947.  For many years, he chaired its military-civilian advisory board.  Among his honors and awards, Bob was voted the first “Alaskan of the Year” in 1967.  In the same year, Alaska Methodist University (now Alaska Pacific University) awarded Bob an honorary L.L.D. degree.  Bob served as a trustee of Alaska Pacific University, and he and Evangeline funded scholarships, a fountain, and building renovations.  In 1970, Bob was named a distinguished citizen by the National Municipal League, where he served as a director. Bob served as the honorary Norwegian consul for many years.

In his last years Atwood wrote an autobiography of his experiences in Alaska which was published as Bob Atwood’s Alaska: The Memoirs of a Legendary Newspaper Man.

Over the years, the Atwood family has supported civic and cultural activities primarily serving the Anchorage area.  The Atwood Foundation was established in 1962 to benefit the people of Anchorage, Alaska, and vicinity, especially young people, by providing support for education and arts projects.  It has a grant program to provide support to non-profits associations specializing in the arts, journalism, history, or civic events. The Atwood Foundation also supports post-secondary journalism education at the University of Alaska Anchorage and a scholarship program at Alaska Pacific University.8

The Atwood Family Papers, 1906-2003 (HMC-0989) are held by Archives and Special Collections, Consortium Library, University of Alaska Anchorage, and are open for research.10 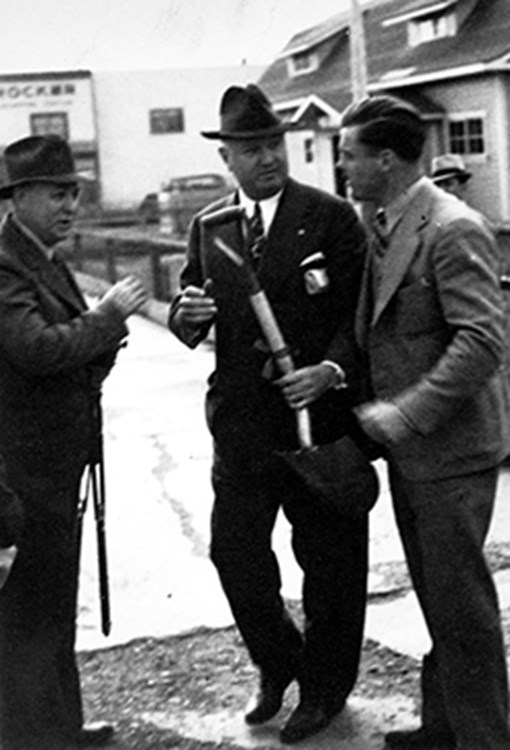 Bob Atwood shortly after his arrival in Anchorage (on right). Atwood is talking to F. C. Hanson, an engineer with the Alaska Railroad, and Jim Farley, the U. S. Postmaster General, in front of the Anchorage Post Office on Fourth Avenue. 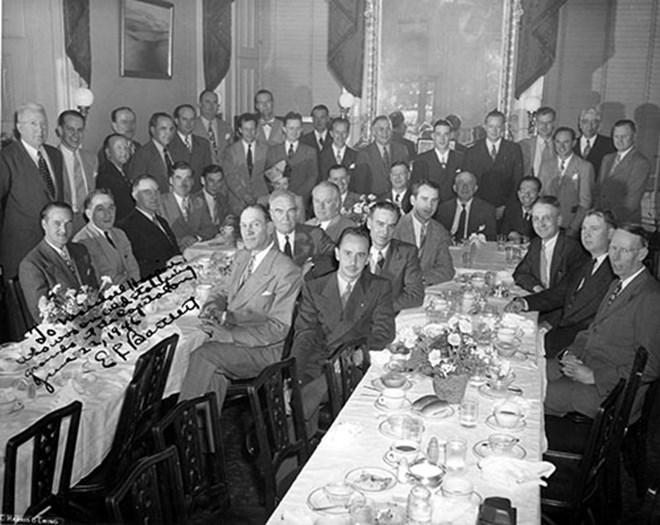 Anchorage businessmen chartered a flight to Washington, D.C. to petition for an international airport, June 22, 1946. Atwood is forth on the left (seated). Senator Ernest Gruening is at the far end of the right table and Senator Bob Bartlett is on his right. 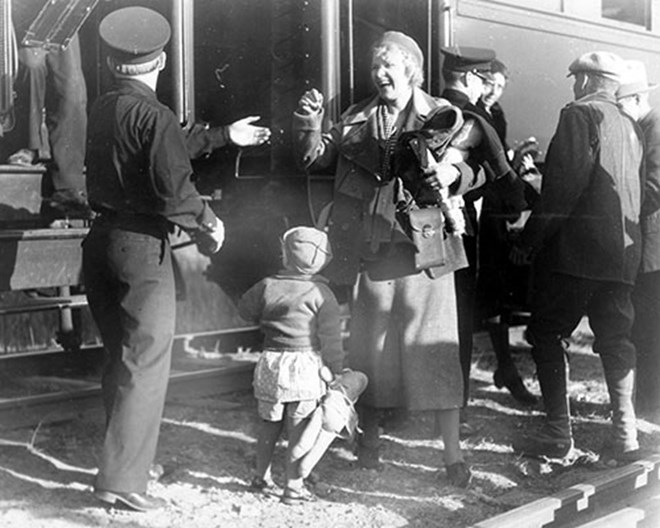 Matanuska Colonists arriving in Palmer. Atwood was a supporter of the Matanuska Colony development, which coincided with his arrival in Anchorage in 1935. 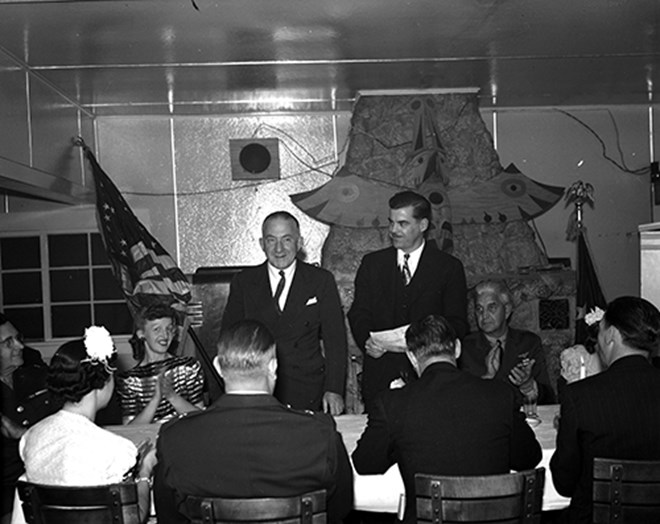 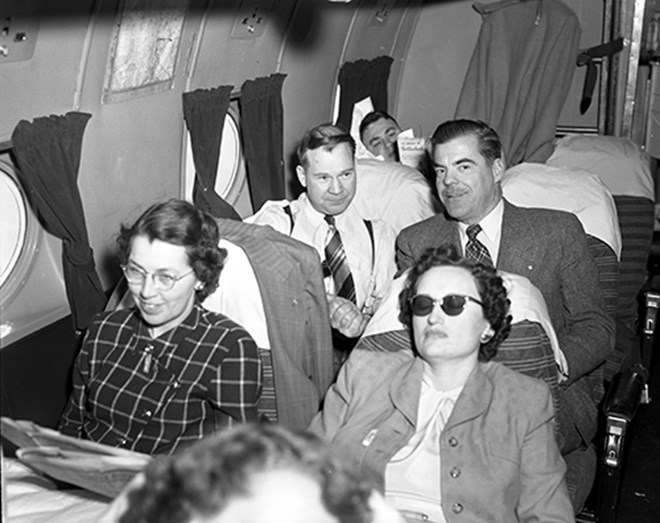 Ship of State. Statehood group travels to Washington, D.C. in 1950 on board a DC4. Senator Gunnard Enebreth and Bob Atwood sit behind two unidentified women. 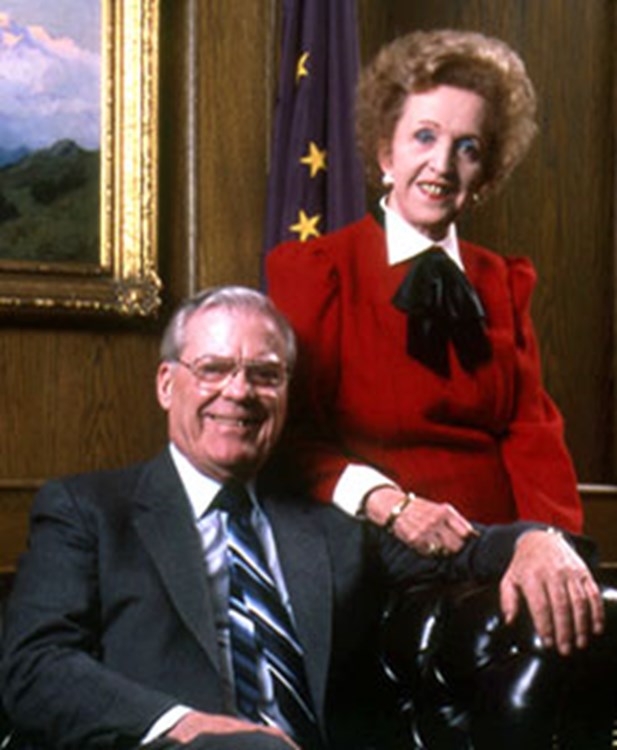