John B. Bagoy established the first commercial nursery and greenhouse in Alaska near Flat in 1915 and in Anchorage in 1921. Soon after their arrival in Anchorage, he and his wife, Marie, built their first home and a greenhouse at 4th Avenue and A Street. In 1935, they established Anchorage’s first floral shop, Flowers by Bagoy.

John Benedict Fabian Bagoy (Bagoje) was born in the village of Dunave' in the state of Dalmatia in the country of Croatia on December 23, 1869, the son of Pero Bagoje and Ana Katic. He came from a family of poor farmers who lived the life of peasants on the land. At the age of seventeen, he was conscripted into the Austro-Hungarian army and served two hitches. He was subject to further conscription as a reservist.

In 1893, Bagoy left for the United States in search of a better life. He did not find it in New York, and with a new-found friend and countryman, he set out for California. They first landed in Angels Camp, California and worked in the silver and gold mines.

Bagoy was lured at the age of twenty-five by the cry of gold in the Klondike and traveled to Skagway, Alaska in 1896. He worked his way over the Chilkoot Pass by packing loads for other stampeders. He earned enough to get his 1,200-pound grubstake by 1897-1898, and was on his way. Upon arriving at Dawson, Yukon Territory, he found that most of the gold-bearing ground had been claimed and staked. He joined a concession with a man named Johnson who held three claims on Hunker Creek, a tributary to the Klondike River, which ran about parallel with Bonanza Creek, and entered the Klondike River about ten miles from its mouth. Johnson held the claims, and miners worked for him in exchange for shares, an arrangement called a concession.

Bagoy earned a good stake, and left for Nome, Alaska in 1900, but was unsuccessful in finding gold. He returned to Bakersfield, California and, with a partner, opened a general store. He decided to become a U.S. citizen in 1906, and then to take a trip to Austria. In the village of Trebinje, just north of Dubrovnik, he met Marie Antoinette Vlahusic', twenty years old, born in Linz, Austria on November 1, 1886. Her father was a civilian concessionaire with the Austrian Army and moved to various military posts, operating commissaries. A whirlwind courtship ensued, and they were married in 1907.

After returning to the United States, Bagoy first settled in in Tonopah, Nevada, where he found work in the silver mines and where their first child, Peter, was born that same year. In 1908, he packed up his family in Tonopah to prospect for gold around Fairbanks, Alaska. They traveled by stage to San Francisco and then, by train to Seattle, and steamer to Skagway. In Skagway, they booked passage on the White Pass and Yukon Railway, which connected the deep-water port of Skagway with Whitehorse, in Canada’s Yukon Territory. They boarded a steamer and headed for Fort Gibbon and up the Tanana River to Nenana, then on the Chena River to Fairbanks.

In the fall, Bagoy staked a claim on Fox Gulch and spent the first winter in a tent, mucking out a drift. Marie Bagoy cranked the windlass, hauling up the bucket of muck at thirty below zero with young Peter on her back. In the spring, he gave up on Fox Gulch and moved over to Goldstream and Fairbanks Creek, where his luck did not improve. The winter of 1909 found them moving into town into a log cabin on Garden Island, where Marie Bagoy took in washing and he found work as a waiter and bartender in town.

Again, Bagoy heard the call of "gold," this time in Iditarod. Down the river they went in 1910, landing in Iditarod that summer. Marie Bagoy was with child again, and in November 1910 a daughter, Doris, was born. She was the first child born in the Iditarod mining camp and was the talk of the town.[1]

Bagoy’s mining luck continued to be all bad. He went from job to job to keep the family afloat, doing some prospecting and "sniping old claims" in between times. He had three roadhouses that befell the water from floods and the Riley Investment Company dredges. He finally found some bottomland on Flat Creek with a house, a barn and a large root cellar, and decided to be a farmer again. By 1921 the mining was falling off and their eldest daughter, Doris, and son Peter needed a high school education. John Bagoy formed a lottery and sold tickets on his farm, raising enough money to move to Anchorage. During their trip from Iditarod to Anchorage, the family lost most of their worldly goods and mementos in the Nenana River.

Arriving in Anchorage in 1921, Bagoy found temporary lodging in the Gitchell Hotel in Anchorage for his family and then located two cabins on 4th Avenue and A Street. He pulled them together to make a livable place. He found a foundry job with the Alaska Railroad and worked with Marie in their greenhouse and garden in the evenings. He left the foundry job to work for the City of Anchorage as a “night man, tending pumps,” at the pump station at Ship Creek. Bagoy continued to work for the City of Anchorage until about 1935, when he resigned to work full-time at the greenhouse.[2]

The Bagoy’s made a decent living, raising hothouse tomatoes, cucumbers, and other vegetables and selling them to the local stores. Marie Bagoy was talented with her flowers, and in the summer she did well arranging flowers for weddings and funerals. In the winter she made her own flowers and dipped them in wax to make wreaths and other items. They were becoming successful in this venture and, in 1935, were able to build a new home and also open Bagoy's, the first florist shop in Anchorage. Their flower shop was opened after Northwest Airlines started flying into Anchorage and fresh flowers could be brought into town. After the arrival of the military in 1940 due to build-up leading to World War II, there was a great demand for fresh flowers, like corsages.[3]

John B. Bagoy died on March 26, 1940. Marie Bagoy continued in the family business until she retired in 1953. She left soon afterwards to move to Seattle, Washington, and lived near one of her daughters. Daughter Mary Lakshas and her husband, Otto, took over the shop and operated it until Otto’s death. Mary sold the shop in 1972, but the name still remains the same in Anchorage, as the first and oldest flower shop in Anchorage and in Alaska.

The Cook Inlet Historical Society has had many leaders since its founding in 1955, and many members have contributed significantly to projects to benefit the Anchorage Museum at Rasmuson Center. One founding member, John P. Bagoy, set a standard for those contributions. John's love of local history resulted in the 2001 publication of the book, Legends & Legacies, Anchorage 1910-1935, a salute to many of the families and individuals who came to the territory during its early years. Through John's diligent research and fundraising the project grew from a panel exhibit in the Anchorage Museum's upper atrium to the web-based interactive research tool available to visitors today. 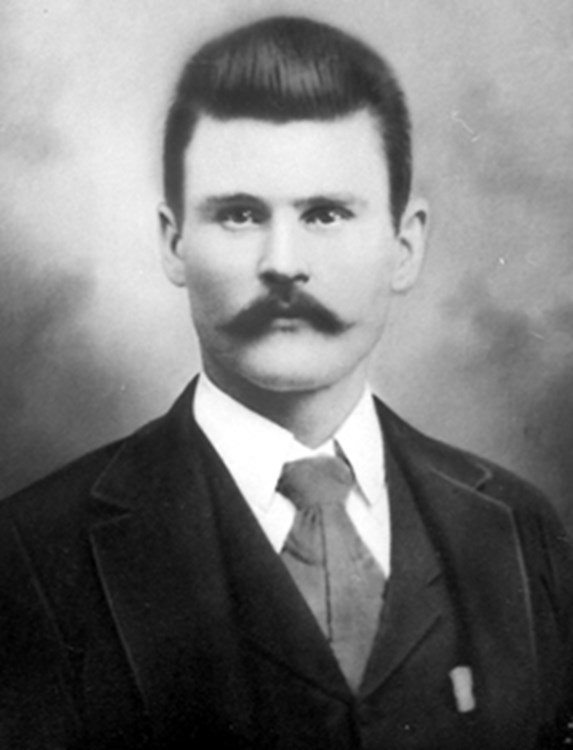 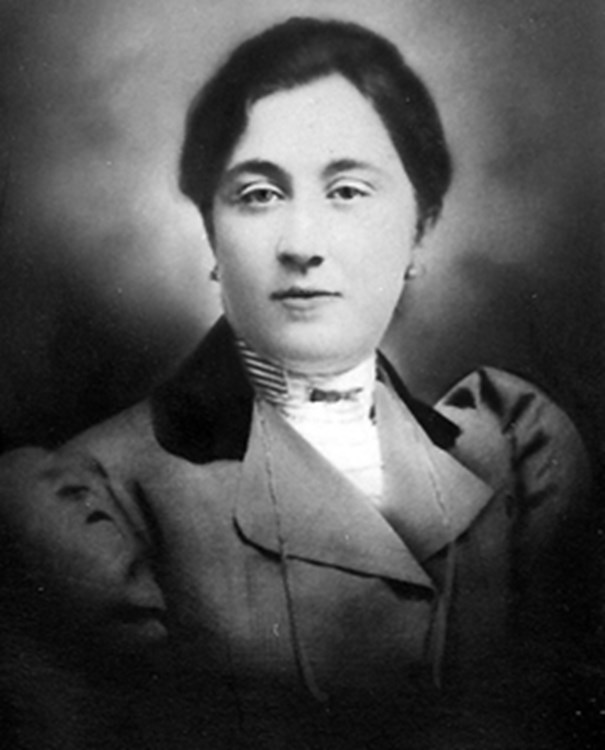 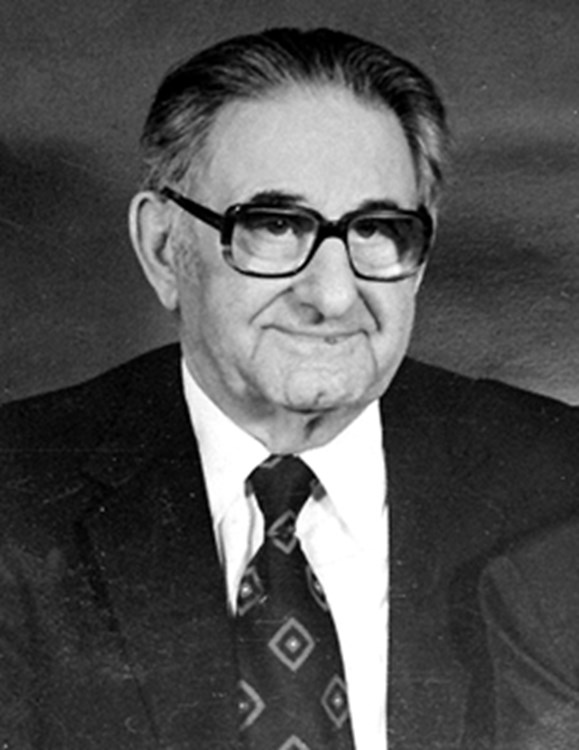 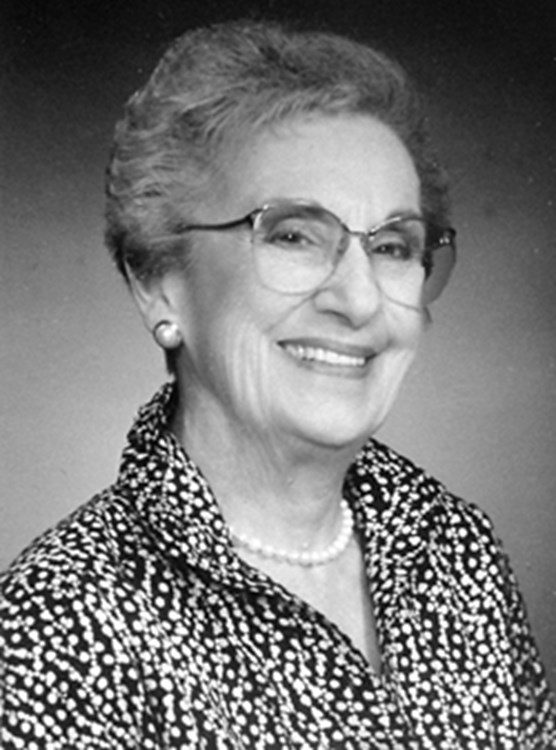 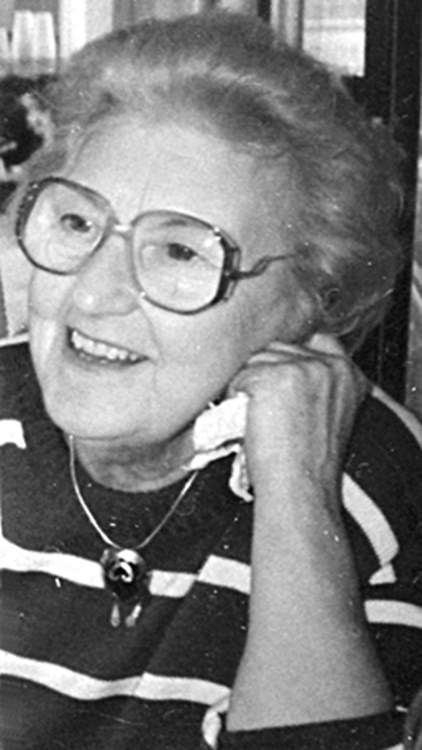 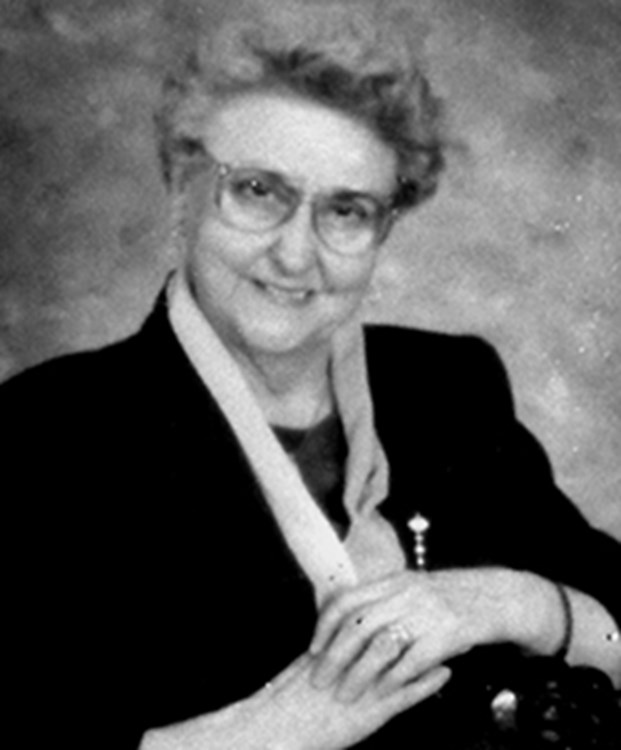 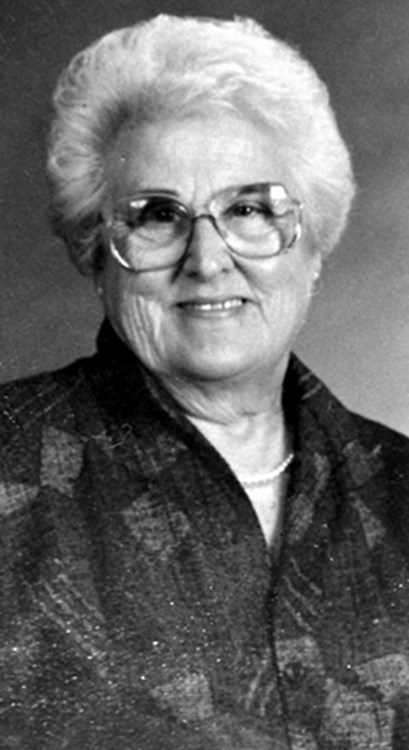 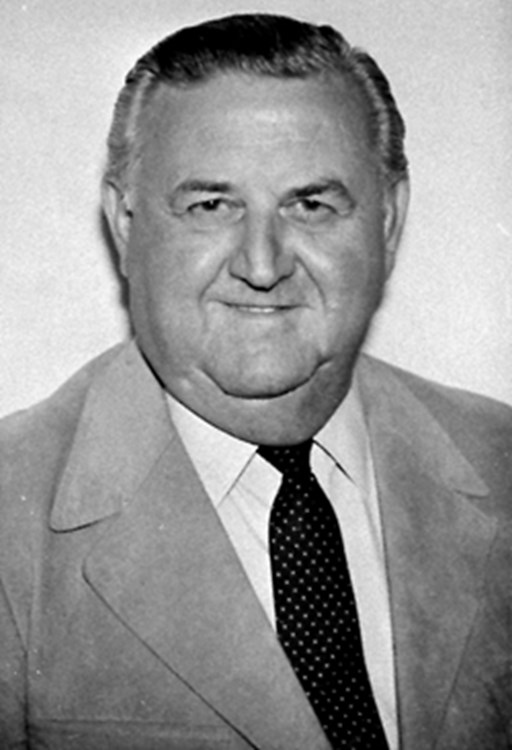 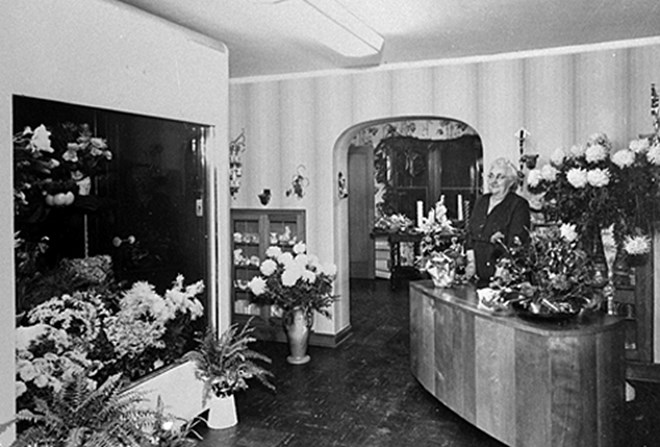 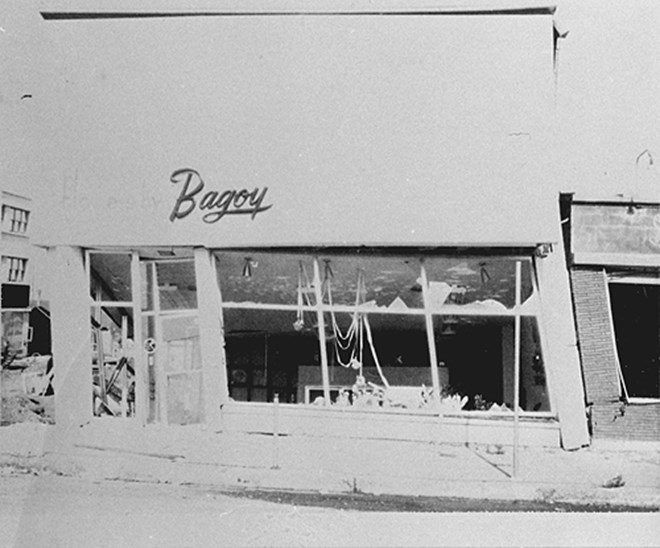 The Bagoy flower shop at 4th Avenue and B Street, following the 1964 Alaska earthquake. 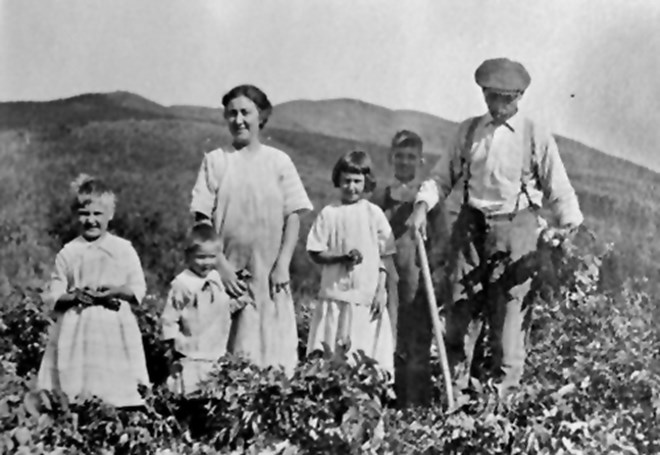 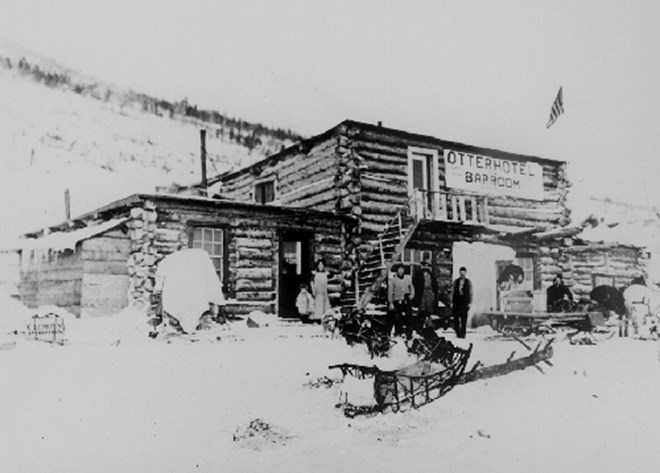 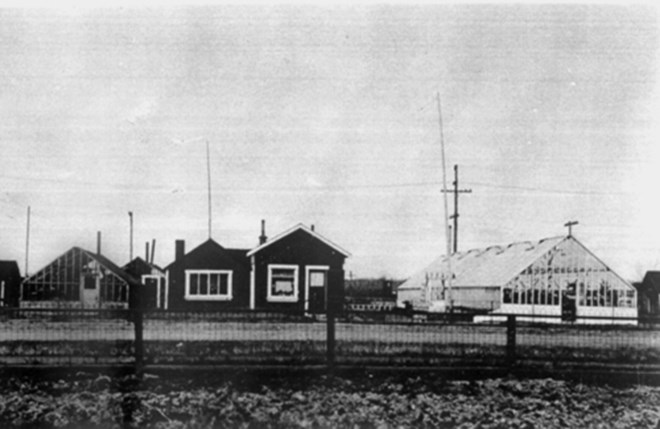 First home and greenhouse in Anchorage, 4th Avenue and A Street, 1923. 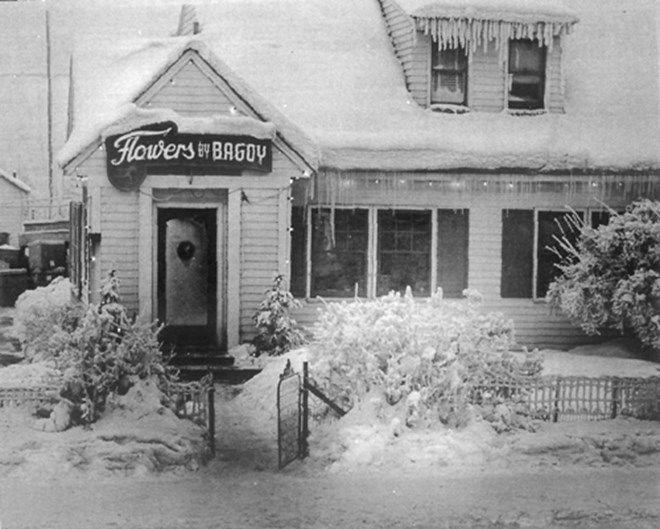