Heinrich "Heinie"[1] Berger was one of Alaska's true entrepreneurs who eventually settled in Anchorage. Along with others, he will be remembered for pioneering businesses and development, which benefited the people and the Territory of Alaska.

Berger was born in Hanover, Germany on June 24, 1888. He immigrated to the United States from Lima, Peru on or about January 27, 1908 at the age of nineteen aboard the vessel Balmoral and arrived at Port Townsend, Washington on March 27, 1908. In July 1915, he applied to become a U.S. citizen at the U.S. District Court in Seattle, Washington, and became a naturalized citizen in 1921.[2] Later that year, they arrived at Seward, Alaska, where he and a partner supposedly established a tailor shop.

Berger held shipmasters' papers and sometime in the 1920s he acquired a boat, which he named the Discoverer. Built in Seattle, it was a thirty-ton gas schooner, fifty-three feet long, with a fourteen-foot beam and a one hundred horsepower engine. Berger operated the boat out of Seward, Seldovia and ports in the lower Cook Inlet. In 1926 he started his freight and passenger service between Seldovia, Homer, Tyonek, Kenai, and Anchorage.

While Berger operated boats up and down Cook Inlet, he developed a strong friendship with Allen and Alice Hardy who owned a fox farm on the Kasilof River. Tragically, Allen died in an accidental drowning on the river in 1930, leaving Alice a widow. One year later, she and Berger married. According to the 1940 U.S. Census, Alice was born around 1899 in Wiseman, Alaska.

In the 1930s Berger was operating between Seward and Seldovia making two trips per month carrying mail, passengers, and freight. In December 1932, he was making his last trip from Anchorage and ran into heavy ice near Ninilchik when the Discoverer suddenly started taking on water. Berger and his crew of three barely had time to get a skiff off the deck and into the water before the boat went down. They fought their way through bad weather and strong surf but managed to get the dory onto the beach between Kenai and Kasilof. Berger and his crew walked twenty-three miles to reach his Kasilof Fox Ranch. Within three days the airplane pilot Matt Niemenen succeeded in picking them up and flying them safely back to Anchorage.

Without wasting any time, Berger set off for Seattle, intent on purchasing another boat. Equipped with about $15,000 he had won earlier that year in the Nenana Ice Pool, he found what he wanted still under construction - a seventy-six foot long, nearly eighteen-foot beam boat with a two hundred horsepower Washington diesel engine. It could carry fourteen passengers on a cabin deck and fifty tons of cargo in the hold and on the deck. He named it the Discoverer [II] and started a run from Seattle to Anchorage, making six trips per year carrying passengers and automobiles on the deck and forty to fifty tons of groceries in the hold for local grocery stores in Anchorage.

Business was booming for Berger so he decided to buy another boat to take care of the local runs on the Inlet. He had a sixty-one foot, thirty-ton wooden hull boat built at the Berg Shipyard in Seattle. It had a sixty horsepower Fairbanks Morse diesel, a fifteen-foot beam, and carried ten passengers. Berger advertised a fifty-dollar prize in the Anchorage Times for any school kid to come up with an appropriate name for his new boat. Ted Bystedt won the prize with the name Kasilof and it began its local run on Cook Inlet in 1935.

In 1937, Berger decided to expand into the entertainment business. He bought a partially completed building on the corner of 6th Avenue and C Street in Anchorage and named it the Ambassador Club. In those days, it was the finest club in town. His business partner, Chris Terry, successfully managed it. Also, in 1937 Berger set up the Berger Distributing Company to supply products up and down the rail belt and on the Inlet.

In 1938, Berger brought in three Wurlitzer jukeboxes and put one in Richmond's Soda Fountain, one in the D and D Café, and one in the Anchorage Grill. The Grill had a good dance floor and the teen crowd frequented both it and Richmond's. His entertainment and transportation businesses flourished.

In 1938, Berger bought a scow, which he loaded up with groceries and freight amounting to about two hundred tons. He carried lumber, automobiles, groceries, and miscellaneous freight for Anchorage merchants at a freight rate with which the Alaska Steamship Company and the Alaska Railroad could not compete. Colonel Otto F. Ohlson, the general manager of the Alaska Railroad, could not tolerate Berger’s competition and his use of the old City Dock, which was on Railroad property but was leased to the City of Anchorage. To reach the dock on the second bend of Ship Creek, you had to cross the main line of the Railroad. Ohlson blocked his access to the dock and forced him to pay the Alaska Railroad $1.25 per ton wharfage. This created a lawsuit, which initially Berger lost. He then appealed to the U.S. Court of Appeals for the Ninth Circuit in San Francisco, California. The suit finally died a natural death when World War II began.

The U.S. Navy chartered the Discoverer [II] during World War II and she was used as a submarine net-tender at Adak. She was sold as surplus property after the war and was used as a mail boat from Ketchikan to various villages in southeast Alaska. She was wrecked on that run in the early 1970s. The Kasilof stayed on the freight run from Seattle to Anchorage during the war. Apparently, she burned to the waterline in the 1980s somewhere in southeast Alaska. After the war Berger operated power barges and the MV Garland.

Heinrich Berger died in Seattle in 1954 after a long illness. His wife, Alice Burger, was left with the estate; however, he left no will, so the settlement of the estate cost her dearly. She tried to hold on and run the business, but finally had to sell out. She retired to eastern Washington and passed away there in 1960. 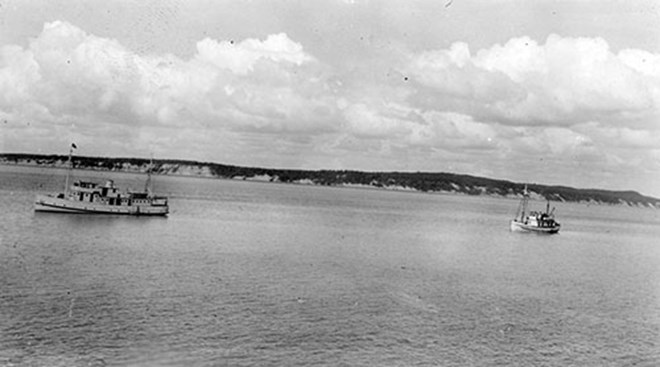 Heinrich Berger's boats, the Discoverer on the left and the Kasilof on the right near Anchorage in 1937. 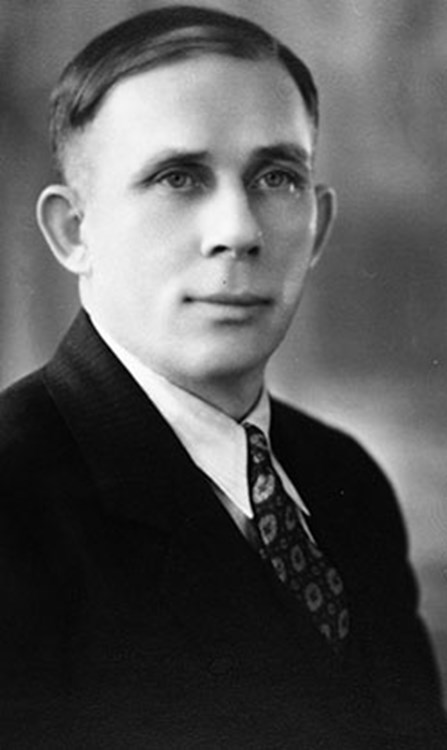 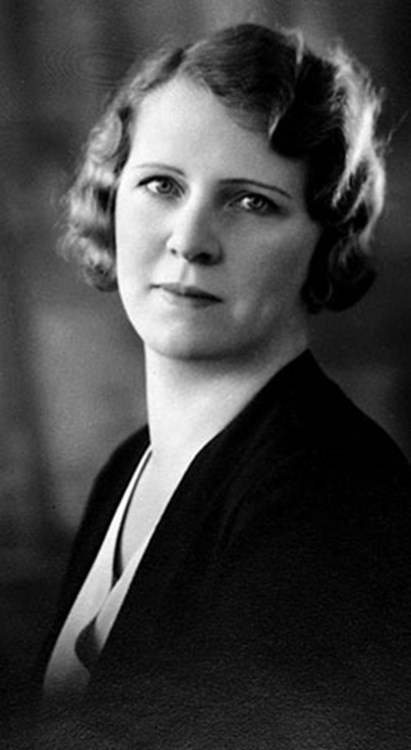 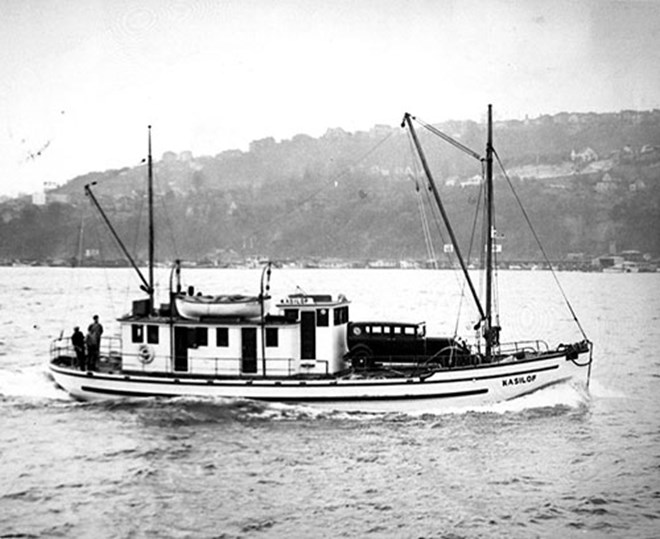 The Kasilof began its local run on Cook Inlet in 1935.

[1] The word "Heinie" was a "typical name of a German man," from North American slang, 1904, from the "pet form of the common German name, Heinrich" (Henry).  This term was brought to Europe during World War I by Canadian soldiers (British soldiers called their adversary, "Fritz") (see, Douglas Harper's Etymology Dictionary (http://findwords.info/term/heinie).  It became a contemptuous term "used to refer to a German, especially a German soldier in World War I or II.” Also, it is “part of the body you sit on.” http://merriam-webster.com (accessed July 20, 2016).