Charles William Bush became Anchorage’s third mayor on October 8, 1924. Bush was appointed by the Anchorage City Council to fill out the unexpired term of Michael J. Conroy, who resigned on October 2, 1924. Bush resigned on January 1, 1926 to move to Portland, Oregon, his home before he came to Alaska nearly a quarter of a century earlier in around 1905. He also was elected to one term on the Anchorage City Council (1923-1924).1

Bush was born in Germany on October 17, 1881 and immigrated to the United States later that year. By age eighteen, he was working as a clothing salesman in Portland, Oregon.2 About 1905, Bush arrived in Alaska where he, his sister Emma, and her husband, Hunter B. Ingram, operated a tobacco store in Valdez. Around 1909, he because a principal of the firm of Ingram and Bush, which by that time had expanded their business to sell clothing. By 1910, he was still in Valdez, and lived as a lodger with Emma and Hunter Ingram.3 He lived in Valdez for the next five years and then settled in Anchorage in 1915.

In 1915, Anchorage had been selected as the construction headquarters for the Anchorage Railroad that was built between Seward and Fairbanks. Actual railroad construction started in the spring of 1915. On July 10, 1915, the first auction sale of town lots led to the formal opening of the town. On August 9, 1915, an election was held to determine the town’s official name. The new town was called Anchorage, with a population between 2,000 and 2,500.4 By the spring of 1916, the town’s population had increased to 6,000, making it the largest city in Alaska.5

Bush quickly moved into a position of prominence. By 1917-1918, he was working as manager of the Brown & Hawkins general mercantile store in Anchorage.6 He served as manager until the store closed in 1926. The Alaska Weekly noted that he was “an asset in any town he lived in.”7 He was described as “always a lover of clean sports” because of his active involvement in baseball and basketball. Bush was also a hunter. In 1926, during Bush’s last months in Anchorage, he helped organize a group to go across Cook Inlet on N. J. “Nick” Gaikema’s boat to hunt waterfowl.

Bush was first elected to the Anchorage City Council on April 3, 1923. At the time he was elected, construction of the Alaska Railroad, the primary reason for the establishment of the town of Anchorage, was nearing completion. The town was only eight years old. On November 23, 1920, Anchorage was declared as a legally incorporated city. Providing infrastructure (sewers and water lines, electrical power lines, sidewalks, upgrading streets) was a continuing focus of the city council. The state of some of the streets is indicated by a motion, seconded by Bush, at the May 14, 1924 city council meeting, to obtain “a sufficient number of men and teams to work in cleaning up the brush and stumps from the streets” and “to grade the streets.”8 During this early period of Anchorage’s history, the years that Bush served as a city council member or was mayor, construction or repair of water and sewer lines took nearly half of the city’s annual budget each year.

Upon being elected to the Anchorage City Council on April 25, 1923, Bush was assigned to several standing committees: Finance; Public Utilities; and Streets, Alleys and Buildings. Within weeks of being elected, Bush and Arthur A. Shonbeck moved to create a purchasing board to review all invoices submitted to the city. This was approved, and he and Shonbeck were appointed as the first board. Bush was also appointed as the chair of the Public Utilities Committee. In this capacity, Bush became deeply involved in local utility and transportation issues. Bush frequently met with Colonel James G. Steese, the head of the combined Alaskan Engineering Commission and the Alaska Road Commission, about the city’s power and telephone systems, which were owned and controlled by the federal government.   Early in Bush’s term on the city council, the telephone system was at capacity, and the city council felt it unwise to invest city money in a system the city did not own.9 On May 14, 1924, a new lease was signed that guaranteed that any monies the city put into utility infrastructure would be repaid at the end of the lease by the federal government.10 This encouraged the city to meet citizen demand for additional telephone installations. Another of Bush’s early actions was to advocate for vacations for city workers.11

At the July 11, 1923 city council meeting, Bush brought up the subject of the movie set buildings at the end of 3rd Avenue that had been built for the movie Cheechako. The city clerk was instructed to write Austin E. “Cap” Lathrop, who had them built, about removing them.16 Apparently no action was taken because the Western Alaska Fair Association submitted a petition at the city council’s August 20, 1924 meeting to allow them to use these buildings.17

Dogs were a constant problem in early Anchorage. Within a month of Bush’s 1923 election, the Anchorage City Council directed the “Malemute Kid” to clean up his dog yard at the edge of town at its April 25 meeting.18 Several weeks later the Anchorage Hotel was directed to clean up their dog kennels.19 On February 27, 1924, dog licensing was first enacted.20 On April 10, 1924, the city council appointed M. Tanaka as the city’s first dog catcher. 21 Tanaka was reappointed to this job eight months later on December 10, 1924.22

The Anchorage City Council minutes show that it dealt with what now seem like minor issues. All invoices for the city, no matter how small, were reported to the city council. On January 30, 1924, Bush moved to buy linoleum for the telephone operators’ floor.23 Complaints about automobile speeders had the council ordering police to enforce speed limits, as per city ordinance, particularly the eight miles-per-hour limit around the Alaska Railroad Depot.24 Complaints about sanitation issues commonly show up in the minutes. Proper garbage cans were another council focus for several meetings.25 The city council acted with alacrity when a committee of the Anchorage Woman’s Club, on March 19, 1924, complained about sanitary conditions at the city’s six dairies. The inspectors appointed by the council called one dairy “unsanitary in every respect” with the other five ranging from “unsanitary” to “good and clean.”26 There were concerns about decaying salmon in Ship Creek affecting the quality of the city’s water supply.27 Bicycle riding on sidewalks was repeatedly brought to the attention of the city council, leading to action to forbid bicyclists to ride on city sidewalks.28 On July 2, 1924, the council approved paying W. B. Yonker $200 to put on an “aerial circus” on the Fourth of July.29

A controversial subject during Bush’s time on the Anchorage City Council was the petition from the Alaska Light and Power Company to control of the local power lines and telephone system as a condition for the company to provide Anchorage with hydroelectric power from the proposed Eklutna power project.  After considering the issue, the council arranged for a public vote in August 1924. The final vote count ended in a tie, with 237 for the Anchorage Light and Power Company, and 237 against. A second vote in April 1925 was even more unfavorable, with 465 votes against to 270 in favor.  By the late 1920s, local reluctance about the project was overcome and Anchorage bought its power from Alaska Light and Power for less money than it had paid the Alaska Railroad, the previous supplier.

On October 8, 1924, Mayor Joseph Conroy resigned. Bush nominated prominent local businessman and fellow council member Arthur Shonbeck to replace Conroy, but Shonbeck declined. The city council then unanimously elected Bush to finish Conroy’s term as mayor. The following April, Bush successfully ran for his own one-year term as mayor. As mayor, Bush seems to drop out of the City Council city council minutes. The mayor offered few if any motions, and voted only to break a tie among the six council members. His voice is rarely mentioned in the city council minutes. If the mayor participated in the activities of the various standing committees, it is not obvious from the official minutes.

On October 1, 1925, the store for which Bush was manager, Brown & Hawkins, began running full page advertisements in the Anchorage Daily Times (then only eight pages long) proclaiming that its $100,000 stock was to be liquidated. At the end of December 1925, Brown & Hawkins closed their Anchorage store (their store in Seward remained open). Bush made the decision to move with his family to the Pacific Northwest. He submitted his resignation as mayor to the city council on December 16, 1925, to become effective January 1, 1926. Bush had been a dedicated public servant during his elected service, having served on various city council committees. He missed only one council meeting during his one term in office, a far better record than any of his fellow council members.

On January 2, 1926, Bush, his wife Dora Ellen Fowlkes Bush, and their ten year-old son, Edward, left Anchorage for their new home in Portland, Oregon.30 Sometime between 1926 and 1930, Bush moved to San Diego, California, where he worked as a salesman for the Marston Company, a well-known department store.31

Charles William Bush died on August 4, 1955 at the age of seventy-four. His widow, Dora Ellen Fowkles Bush, died on August 8, 1987. They had one son, Edward. 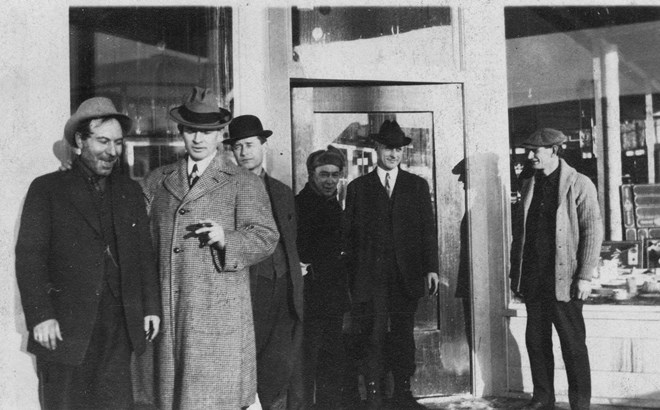 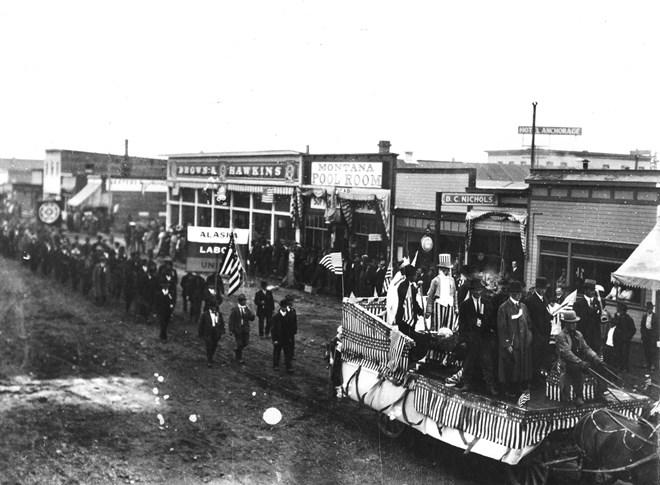 Behind the parade float, next to the Montana Pool Room, is the Brown & Hawkins store in downtown Anchorage. The store, one of the largest in Anchorage, went out of business at the end of 1925, a casualty of the financial decline that struck Anchorage during World War I and accelerated after the completion of the Alaska Railroad. 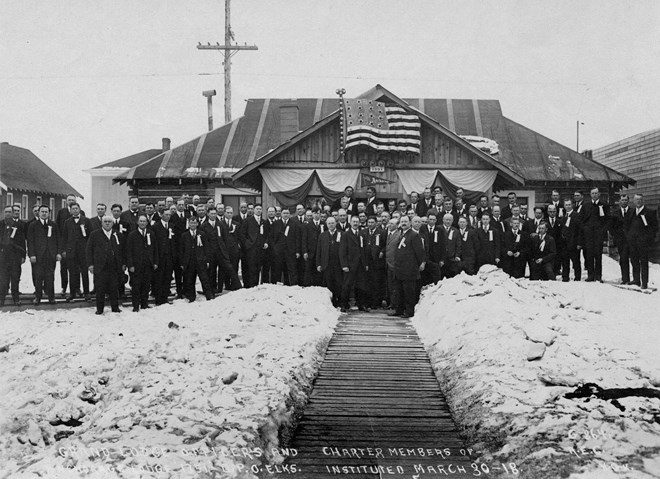 Photograph of members of the Elks (Benevolent and Protective Order of Elks, or B.P.O.E.), a prominent men’s social organization in Anchorage, around 1918. The large Elks Hall in downtown Anchorage was an important meeting place as well as a center for social events. Charles Bush was an early member and officer of the group. 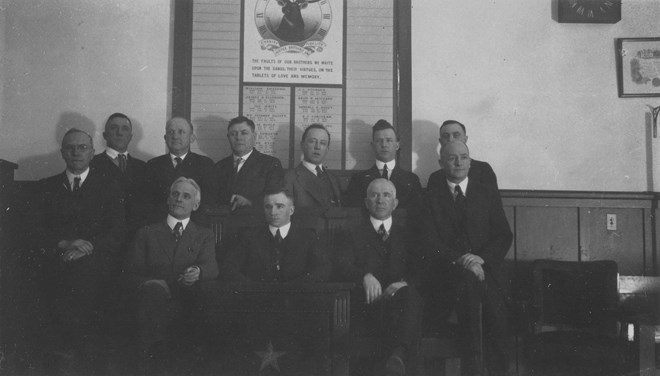 Officers of the Elks Anchorage Lodge, No. 1351, ca. 1924. Charles Bush is seated on the left in the first row; seated next to him in the center of the front row is James Delaney, exalted ruler of the Anchorage Lodge in 1924 who later was also a mayor of Anchorage.