Andrew Christensen, working with Frederick Mears, laid out the Anchorage townsite and supervised the sale of town lots in 1915.  He served as Chief, Alaska Field Office, General Land Office, Juneau, from 1915-1916.  In 1916, he was appointed as Manager, Land and Industrial Department, Alaskan Engineering Commission (AEC), and served until his resignation in 1919.  During Anchorage’s early years, he oversaw the townsite development of Anchorage and guided the growth of the community.  He managed the town first through the General Land Office and then through the Land and Industrial Department of the Alaskan Engineering Commission.  The AEC’s Cottage No. 21 at 542 Second Avenue, was a one-of-a-kind residence based on an individual floor plan built for Christensen, and today houses an ophthalmologist’s office.1

Andrew Christensen was born on June 1, 1879, in Thorning, Denmark. He immigrated with his family to the United States in 1889.2 He was raised in Nebraska and graduated from Fremont Normal School in Odgen, Utah.3

Christensen had a varied career, mostly as a federal employee in Oregon, Washington, and Alaska. He started out by working with the Railway Mail Service in 1901.  After his promotion to assistant chief clerk, he worked closely with the traffic officers running railroads through Salt Lake City and Odgen, Utah, and then accepted a transfer to Washington, DC.  While continuing to work, he studied law and obtained his law degree from the George Washington University Law School.  After a brief period in private practice, he joined the staff of the General Land Office in 1908, first working near Portland, Oregon, and then in Seattle.4  In 1909, he was assigned as the government attorney and managed the Alaska coal claims that became a national scandal in the fight between Richard Ballinger, the Commissioner of the General Land Office (1908-1911) and Secretary of the Interior (1909-1911) and Gifford Pinchot, the first chief of the U.S. Forest Service (1905-1910).5  Within the next year, he was named as chief of the Alaska field division in Seattle, Washington.

On January 1, 1915, Christensen was transferred to Juneau to establish the Alaska Field Office for the General Land Office.  He had long been aware of the potential problems that would arise on the Ship Creek townsite and strongly urged the GLO in Washington, DC to develop an administrative policy for the new town.  On May 6, he received instructions from the Department of the Interior in Washington, DC, to prepare a development plan to set up a proper town on the bluff south of Ship Creek.  The U.S. General Land Office, which had authority to dispose of the land around Ship Creek, quickly had the area that became Anchorage surveyed, cleared, platted and then auctioned off, and people moved off the flats so that construction on the Alaska Railroad could begin.  In 1909, the landing at Ship Creek had been included within the boundaries of Chugach National Forest.6

In the summer of 1914, under the direction of the Alaskan Engineering Commission, eleven survey parties examined possible routes for the proposed railroad but did not recommend any specific routes in their final report.  It was obvious that they preferred the so-called Western Route.  This was the main route actually surveyed, from Seward through Anchorage and to Fairbanks, and the one built between 1915 and 1923.

Frederick Mears, the member of the Alaskan Engineering Commission in charge of railroad construction, landed at Ship Creek in late April 1915 to direct operations at the site.  Initially, he was responsible for the construction of 230 miles of main line, running from the head of Turnagain Arm to the summit of Broad Pass.  In addition, he was to build a 38-mile spur line to the coal fields at Matanuska.  To do this Mears and the other AEC commissioners chose to build a dock and infrastructure at Ship Creek, now Anchorage.8

When Christensen arrived at Ship Creek on May 24, 1915, he brought with him General Land Office surveyors to measure off the lots for occupancy within the cadastral rectangle previously measured off in 1914.9  As the GLO chief charge, he directed the completion of the 350-acre survey of the Anchorage townsite.  Christensen and Mears worked closely and well together and made on-the-spot decisions while keeping their superiors in Washington, DC, informed of their progress.  They had no experience with townsite planning and named east-west streets numerically and north-south streets alphabetically in a grid pattern that was typical of railroad towns of the period.  The grid pattern created steep grades up the bluff from the bottom of the basin.  In 1916, Christensen Drive, named in honor of Andrew Christensen, was built as a curved road which climbed from the Ship Creek bottom diagonally along the slope.10

The original townsite auction of lots on July 10, 1915 is often given as the event that founded the city of Anchorage.11  The area that was offered for sale was bordered on the north by First Avenue, on the east by A Street, on the south by Ninth Avenue, and on the west by the shores of Knik Arm on Cook Inlet.  The first auction of lots began at 2:00 p.m., with Andrew Christensen acting of superintendent of sales.  He stood on a platform facing north at the present intersection of First Avenue and C Street, in the vicinity of Block 3, Lot 1, at the foot of the bluff.  There was an estimated crowd of from one to three thousand persons in attendance.12  He was selected by the commissioner of the GLO to serve as the auctioneer for the series of auctions in Anchorage as well as other railroad townsites.  Christensen gave a stirring, optimistic speech about the future and promised permanent utilities and other improvements as well as large federal expenditures in Anchorage.  This set off a frenzied auction scene and it spurred bidders into active competition for business and residential lots.  The minimum purchase price for a lot was $25, with business lots in the vicinity of Fourth Avenue appraised at higher prices.  Although the townsite was not formally zoned, Fourth Avenue had been slated as the core for commercial activity.  The first business lot (Lot 1, Block 44) sold for $825, which set the tone for the auction.  Not all lots went for high prices, as residential lots were sold at modest prices.  The sales for the first day, including a night session, totaled $58,470, which broke all GLO records for one sale.13

When sales were closed on July 18, 1915, Christensen reported that the 655 lots sold had brought in just below $150,000.14 There were two more auctions in August and November 1915.  Christensen later proclaimed:  “I could sell lots every day if I were in Anchorage, it seems that the demand for them never ceases.”15  In September 1916, he reported that a total of 1,108 lots had been sold and estimated that the town had a population of about 4,500.

Townsite auctions were held in other AEC railroad townsites, but none were as successful as in Anchorage.  Patents were not issued by the GLO until five years after the auction.  There were some use restrictions on lots, as they could not be used for “manufacturing, selling, or otherwise dispensing of intoxicating liquors . . . gambling, and prostitution.”16  If used for these purposes, the penalty was forfeiture of the lot.

On March 27, 1916, Christensen was reassigned to work exclusively with the AEC, as manager of the newly-created Land and Industrial Department.  His major role was overseeing agricultural and industrial development.   The Land and Industrial Department had jurisdiction for all land matters for the AEC, such as rights-of-way, encouragement of development along the railbelt, and dissemination of public information.  The Department was responsible for the survey, appraisal, and sale of lots in townsites along the railroad, while he supervised the management of towns.17 He served as Anchorage’s unofficial townsite advisor.18 The AEC found itself assuming many of the responsibilities of a local government, as it built roads, installed water and sewer lines, and provided telephone and electrical service.  In addition, Christensen was required to deal with bootlegging, gambling, and prostitution.  In late 1916, he administered the Anchorage school system.  When Frederick Mears returned to active duty in France during World War I, Christensen was placed in charge of the Anchorage Division, one of the three construction divisions of the Alaska Railroad.  He directed the final work of railroad construction in southcentral Alaska.19

In 1919, Andrew Christensen resigned from the Alaskan Engineering Commission.21  After leaving Alaska, he moved to Great Neck, Long Island, New York.  He became an attorney and vice president of the Irving Trust Company of New York, retiring in 1949.22  He became a naturalized U.S. citizen in 1936. 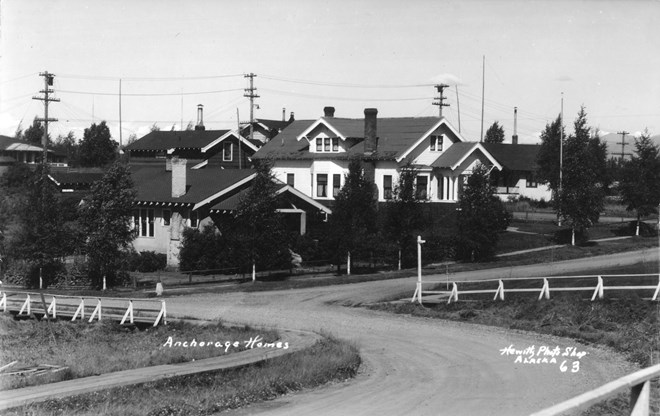 A view of Christensen Road, which curves uphill from the railroad yards at Ship Creek to what is now downtown Anchorage, where all the streets are straight and meet at right angles. Many of the Alaska Railroad executives, such as Colonel Frederick Mears, lived in government built houses along the road, in an area known as “Snob Hollow.” 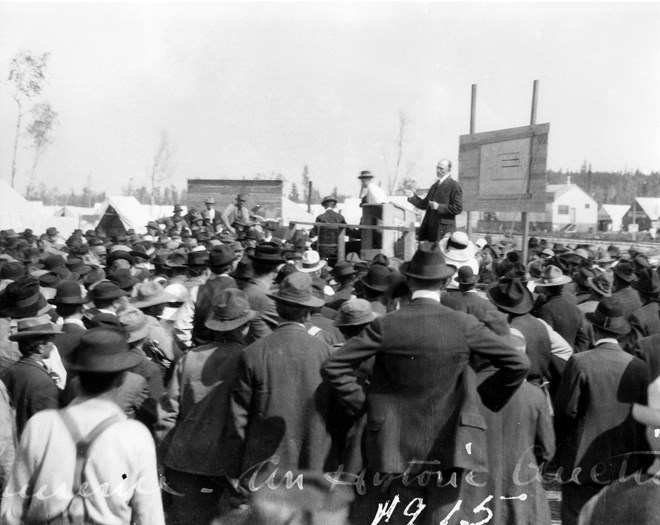 One of Andrew Christensen’s duties in 1915 was the auction of lots in the new townsite of Anchorage. Christensen held three auctions, which surprised the Alaskan Engineering Commission because of the high prices realized for the lots. Christensen is the man in the dark suit on the dais acting as auctioneer. 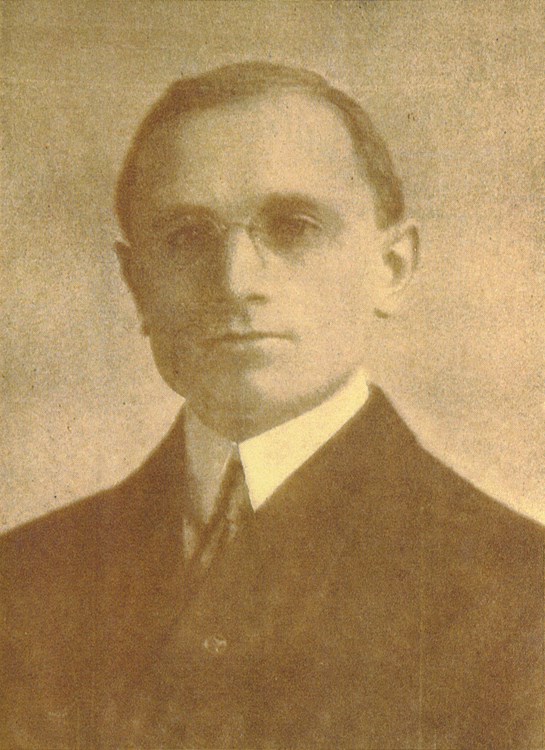 Courtesy of the Christensen family.

6. Alfred Mongin, An Evaluation of ‘Anchorage Cultural Historic District:  a Proposal’ to Determine Eligibility for the National Register of Historic Places (Anchorage:  Office of History and Archaeology, Division of Parks, Alaska Department of Natural Resources, 1976), Historical Background, Item no. 8, page 9.

8. During the beginning of construction of the Alaska Railroad in 1915, the AEC created three construction divisions, assigning the biggest and largest to Frederick Mears.  In 1919, they were abolished under a reorganization plan and replaced with two new divisions, the Northern Division and the Southern Division.  William H. Wilson, Railroad in the Clouds:  The Alaska Railroad in the Age of Steam, 1914-1945 (Boulder, CO:  Pruett Press, 1977), 37-38, and 80-81.

9. Alfred Mongin, An Evaluation of ‘Anchorage Cultural Historic District:  a Proposal’ to Determine Eligibility for the National Register of Historic Places, Historical Background, Item no. 8, page 9.

10. Michael Carberry and Donna Lane, Patterns of the Past:  An Inventory of Anchorage’s Historic Resources, 4-5.

11. Charles Worlforth, From the Shores of Ship Creek:  Stories of Anchorage’s First 100 Years, 27.

12. Many photographs, both official and unofficial, survive of the July 10, 1915 auction.

15. Michael Carberry and Donna Lane, Patterns of the Past:  An Inventory of Anchorage’s Historic Resources, 6-7; and Claus-M. Naske and Ludwig J. Rowinski, Anchorage:  A Pictorial History, 56.

16. Michael Carberry and Donna Lane, Patterns of the Past:  An Inventory of Anchorage’s Historic Resources, 6-7.

19. Michael Carberry and Donna Lane, Patterns of the Past:  An Inventory of Anchorage’s Historic Resources, 51.