Say the name Orah Dee Clark to almost anyone living in Anchorage in the first half of the twentieth century and their face would light up in instant recognition. In 1915, Clark organized Anchorage’s first public school, now known as Pioneer School House, which opened on November 15, 1915.[1] Clark and three other teachers taught over a hundred students “in barely functional conditions.”[2] By the end of 1916, there were two hundred students and four teachers.[3] She was Anchorage’s first teacher, principal, and superintendent of schools, all at the modest salary of $125 per month. Clark was closely associated with the improvement of education in Anchorage during the first half of the twentieth century. Once the Anchorage school was well established, she moved on to develop schools in Wasilla, Eska, Fairview, and Matanuska—all stops along the Alaska Railroad route to Fairbanks. She taught at Unga, Kennicott, Ouzinkie, Takotna, Kiana, Nushagak and, finally, Moose Pass, ending her fifty-one year teaching career in 1944.[4] In recognition of her community role in improving education, Anchorage’s first junior high school, the Orah Dee Clark Junior High School (now Clark Middle School) was named in her honor in 1959. In 1967, she was recognized as one of the four key contributors in education during Anchorage’s early development.[5]  She was posthumously honored by the Alaska Women's Hall of Fame as an inductee in their inaugural class of 2009.

Orah Dee Clark was an adventurous and dedicated teacher and early civic leader. Clark was born on a homestead in Firth, Nebraska on August 25, 1875, the youngest of four children. When she was twelve, the family moved to a farm near LaCrosse, Kansas, and finally to Vancouver, Washington. As a child she attended a small country school in Firth. Clark rode her pony to school during the “good” part of the year, but did not ride during the winter as it was just “too cold.” Clark graduated from high school in Vancouver when she was seventeen.

When Clark was eighteen, she accepted a beginning teacher’s position at a school in Clark County, Washington. Clark earned $35 a month, which she thought was good money, and taught forty students from first to eighth grade. Three of her students were older than she was. She paid $8 a month for room and board with one of the families in the area and shared a bed with two of the family’s children.

After teaching several three month terms in nearby country schools, Clark attended a so-called “normal” or teacher training school at Washington State Normal School (now Central Washington University) in Ellensburg, Washington. After completing her coursework, she taught near Kalama, Washington in 1898, and then in Vancouver, Washington. By then she was making $50 a month, and she remembered having sixty-seven students, teaching both third and eighth grade.[6]

Clark was accepted at the University of Washington as a sophomore and after two and a half years graduated with a B.A. in zoology in January 1906. Later that year, Clark came to Alaska to accept a teaching position in Kodiak, where she also served as the school’s principal. Most of Clark’s one hundred students were Aleuts or Aleut-Russian. In Clark’s interview in Wendy Jones’s Alaska’s Dynamic Women: 200 Years of Alaskan Women, Volume II (1977), she recounted why she went to Alaska:

"I was brought up on a farm in Kansas; when I went back to get my degree at the University of Washington, in 1906, there was a desperate need for teachers in Alaska. Sheldon Jackson U.S. Commissioner for Education in Alaska urged the school authorities to send their education students north. So I came. I liked the thrill of going some place different. I arrived in Kodiak to stay six months; instead I’ve stayed a lifetime."[7]

Clark stayed in Kodiak until 1908, when her mother’s death brought her back to Washington State. In 1910, Clark accepted another teaching position with the U.S. Bureau of Education, this time to teach at the village of Tanana. To get there she traveled up the Inside Passage, over the White Pass and Yukon Railway to Whitehorse, Yukon Territory, then by Yukon River steamer to Tanana. Clark’s duties in Tanana involved more than teaching, as she was also the superintendent, nurse, doctor, lawyer, custodian, maid, and judge. In 1912-1914, she accepted a teaching assignment at the Anvik Episcopal Mission, begun by John Chapman in 1887. Clark later recalled that at Anvik and Tanana: “We were restricted for four months to two meals a day because someone had neglected to pay the freight on the food, which consequently had been left on the wharf in Seattle.”[8] Teachers at remote posts in Alaska received shipments of food and other supplies sometimes only once a year and missing the shipment could result in severe hardship.

In 1914-1915, Clark was a graduate student at Columbia University in New York City. In August 1915 she returned to Alaska to take a teaching position at Susitna Station, a trading post and Dena’ina Indian village on the Susitna River.

Anchorage was being founded and Clark was asked to teach at the school then being built but felt her obligation was at Susitna Station. Upon arriving at this small settlement on the north side of Cook Inlet, Clark found another qualified teacher, Phoebe Nagley, already there. Clark requested and received permission to accept the teaching position in Anchorage.[9] She then returned to Anchorage to become the first principal and superintendent of the Anchorage school, supervising three other teachers.[10]

Clark also taught high school history and English, as well as English and math to the eighth grade. The newly built two story school, Pioneer School, with two classrooms on each floor, had no running water the first year. The four classrooms had wood burning oil drums for heat, gas lights, and homemade wooden desks large enough for four students each. The school was ill-lit and grade school students only attended during daylight in the winter. The small number of high school students were each equipped with a lamp so that they could continuing classes after dark. By 1918, the student population increased to 274 students and there were eight teachers in the system.[11]

Two years after arriving in Anchorage, Clark was asked to organize the first school in Wasilla. A year later, in 1918, she did the same at the coal mining town of Eska. In 1919 she taught at Fairview, a community near Wasilla, and in 1920 she organized a school at Matanuska, a community that no longer exists, near Palmer. In 1921-1922, she taught Americanism in the evenings in Anchorage. A year later she took a contract to teach at Unga, now an abandoned village, in the Aleutians.

In 1923-1924, Clark returned to Anchorage and again taught Americanism. She was also elected president of the Anchorage Woman’s Club, which had organized in 1915 to demand the founding of the first school in Anchorage and was an important force for civic betterment. During her term as president, Clark was deeply involved with organizing the first Western Alaska Fair, complete with agricultural and floral displays, concerts, speeches, farm animals, and a baby parade. She was a board member and officer for the Western Alaska Fair Association in 1924, holding the position of secretary.

From Anchorage Clark went to teach at Kennecott,[12] a copper mine on a tributary of the Copper River, for the 1924-1925 school year. According to Clark’s 1963 interview with Robert and Dorothy Clifton: “She enjoyed this very much and lived in very grand manner from what she had been used to. The mine had two teachers for the children. The Territory paid one and the mine paid the other. They ate at the mess and lived in the staff house.”[13]

During the 1925-1926 school years Clark taught in Portland, Oregon, while also taking care of her ill father. From 1926-1931 she taught at Ridgefield, Washington.   She returned to Alaska in 1931 to teach at the Alutiiq village of Ouzinkie on Spruce Island near Kodiak Island. In 1934-1936 she taught at the Native village of Takotna between McGrath and Ophir. From 1936-1938 she taught at Kiana, an Inupiat Eskimo village thirty miles north of the Arctic Circle on the Kobuk River. While at Kiana she “made her collection of plants for the Universities of Alaska and Washington.”[14]

In 1938-1940 Clark taught at Nushagak, a primarily Yup’ik Eskimo village on Bristol Bay. In 1940-1941 she taught at McGrath on the Kuskokwim River. From 1941 to 1945, she taught at Moose Pass on the Kenai Peninsula. She left Moose Pass to live in Juneau for nearly two years, working for the U.S. Office of Price Administration. During her time in Juneau she was severely injured when she was struck by a truck while walking across a street. Recovery was slow and the effects of the accident and arthritis made her last years difficult. Moose Pass was Orah Dee Clark’s last school.

Most of her long teaching career was spent at remote posts throughout Alaska. In her honor, Anchorage celebrated Orah Dee Clark day on her birthday, August 25, 1962. Clark gave the school which bears her name a three-way mirror to hang “so students can see themselves as others see them.” The students at Clark continued to remember her at Christmas and on her birthday as long as she lived.[15] Clark was a member of the Pioneers of Alaska, Anchorage Woman’s Club, Cook Inlet Historical Society, Soroptimist Club, Society for the Prevention of Cruelty to Animals (SPCA), and the Alaska Crippled Children’s Association. In addition, at eighty-five, she was chosen “Queen of the Oldtimers” for the 1960 Anchorage Fur Rendezvous celebration.[16]

Toward the end of her life Clark was asked what she would say to new teachers in Alaska, and she responded: “The biggest crisis in Alaska is its own desegregation. I think every teacher should be vitally concerned about how best to develop the potentialities of these wonderful natives we have in Alaska so that they can fit into our economic life to everyone’s best advantage.” When praised for her own work as a teacher, Clark responded with “I’ve never done anything outstanding – only taught longer than most teachers.”[18]

Orah Dee Clark died in Anchorage on November 23, 1965, at the age of ninety. She is buried at the Old Vancouver City Cemetery, in Vancouver, Clark County, Washington. 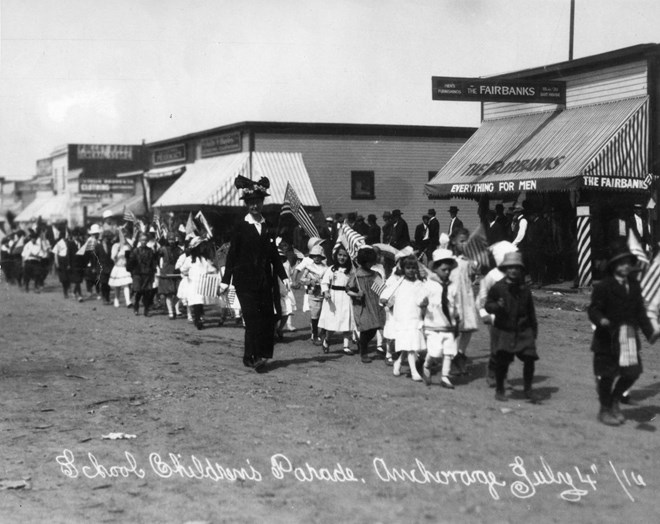 Anchorage elementary school students marching in a parade, Anchorage, 1915 or 1916. The woman in the dark clothing walking alongside them has been identified as Orah Dee Clark. 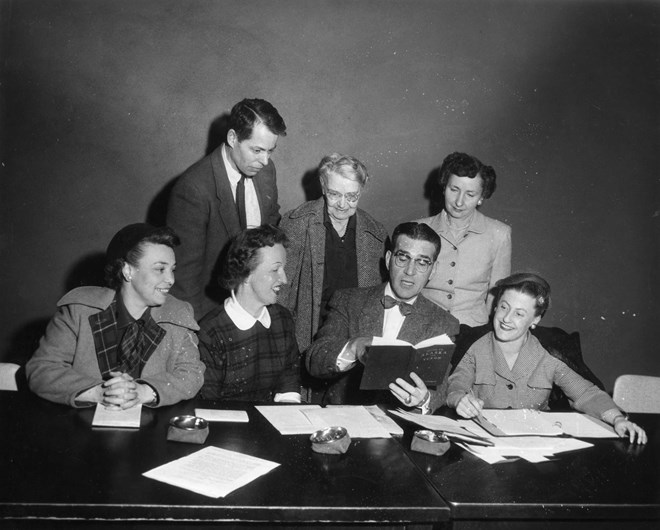 Members of the first board of directors of the Cook Inlet Historical Society when it was founded in 1955. Orah Dee Clark is the woman standing in the center of the photograph. 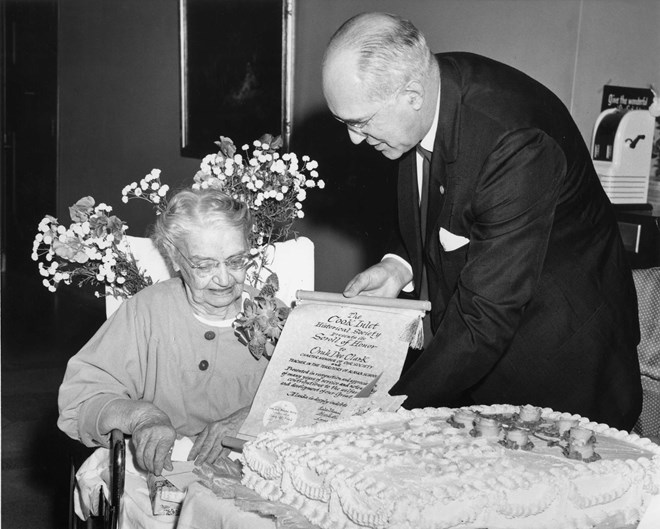 Orah Dee Clark receiving the Cook Inlet Historical Society “Scroll of Honor” on her eighty-seventh birthday in 1962 from Society president Robert B. Clifton. The Scroll commemorated her distinguished service to Alaska and to Anchorage.

[10] Clark later said this about her experience as a principal: “I didn’t last long as a principal in Anchorage. There were two men on the school board then; one was a German who didn’t believe in having a woman principal. At that time in Susitna there was a saw mill and a trading post for the Cache Creek Mines area, since Susitna was the head of the freight mining barges. I got along well with Mr. Nagley, the owner of the trading post, and there was no one around to object to the way I ran the school.” H. Wendy Jones, Alaska’s Dynamic Women: 200 Years of Alaskan Women, Volume II, 110.

[12] As noted in Stephen W. Haycox, Alaska: An American Colony (Seattle: University of Washington Press, 2002), in endnote 36, page 335: “The [Kennecott Copper Corporation] mining corporation took its name from Kennecott Glacier, north of the copper deposits in the Wrangell Mountains, named for the naturalist Robert Kennicott. A Geological Survey cartographer made the misspelling when labeling a map of the region.” The nearby town where Clark taught carries the spelling “Kennicott.”