Michael Joseph Conroy served as the second mayor of Anchorage in 1923-1924. He resigned on September 17, 1924 before completing his term. From 1920 to 1923, Conroy served as city clerk, the first person to hold that office. As city clerk, Conroy played a crucial role as he also performed the duties of treasurer, assessor, magistrate, and as administrator for the City of Anchorage under the mayor and city council. He also served on the city council in 1927-1928.

Conroy was born September 29, 1874 in Ballyoonneeley, Galway, Ireland and immigrated to the United States with his family in 1880.1 He was educated in Manchester, Massachusetts at St. Ann’s parochial school and St. Joseph Christian Brothers High School. After graduating from high school, Conroy worked as a clerk steno-stylist at the S.C. Forsaith Machinery Company in Manchester. Conroy then moved to Boston, where he worked as a general clerk stenographer for the Boston and Maine (B & M) Railroad. He was transferred to Nashua, New Hampshire to work for the B & M’s Worcester, Nashua, and Portland Division in a similar capacity. By 1900, he was living in Trinidad, Colorado, working as a locomotive fireman.2 By 1904, he had made his way to the Pacific Coast, migrating to Los Angeles and then onto San Francisco.3

In 1905, Conroy came to Alaska with John Ballaine to help launch the “ill-fated Alaska Central railroad,” which Ballaine was building north from Seward.4 In 1907, a major depression hit the American economy and construction stopped on the Alaska Central Railroad. The line went bankrupt in 1907 and then was reorganized as the Alaska Northern Railway Company. By 1910, the line was continued north seventy-one miles to Kern Creek, four miles south of the present Girdwood, but the railroad had run low on funds and new rail could not be added. During this period, he worked as a miner and served as Seward’s tax accessor.5

Conroy married Nellie "Nell" Juriah Rushton Muscatt on June 29, 1915, when Conroy was forty years old and Rushton, thirty-eight. Michael Joseph Conroy was the U. S. Commissioner in Seward at the time they were married. Muscatt was a registered nurse and teacher who worked with Dr. Joseph H. Romig in Seward. The couple moved to Anchorage in 1916 and built their home at 429 Fifth Avenue. They had an infant unnamed daughter who died on June 29, 1917.6 On his World War I draft card, dated October 15, 1918, Conroy listed his occupation as lawyer. He gave his height as five feet, eight and a half inches tall. He was “stout “in appearance. Conroy became chair of the draft board in Anchorage in 1918, witnessing the information provided by his fellow residents.7 The 1920 U.S. Census for Anchorage lists Conroy as a lawyer.8

Conroy supplemented his income by continuing to prospect for gold.  His name was mentioned in a brief note in the August 16, 1920 Anchorage Daily Times.  It stated that Conroy, Nick Gaikema, and Bill Murray had just returned from a month long trip “ . . . down the inlet on [Gaikema’s] Sea Lion” prospecting for gold and “seeking oil” in the Cape Douglas area. According to the Times, it was a “pleasant and profitable trip.”9

The 1920s were a difficult period for Alaska and, especially, for Anchorage. In 1920, Alaska had a population of slightly more than 55,000, a loss of more than 14 percent since the 1910 federal census. When the United States entered World War I, many residents had left Alaska to enter military service or to work in war industries and never returned. Following World War I, the United States experienced an economic boom, but in Alaska the economic opportunities were more limited.10

From 1915 to 1920 the Alaskan Engineering Commission found itself responsible for much of the governance of the budding town of Anchorage, a responsibility it had not anticipated and did not want. Prodded by the AEC and the recently created Anchorage Chamber of Commerce, Anchorage residents finally voted in favor of incorporating a local government in a special election held on November 2, 1920, with a vote of 328 in favor and 130 against.

More than five years had passed since Anchorage had boomed with the construction of the Alaska Railroad, with the population as high as 6,000. By 1920, Anchorage was “an uncertain little village with an official population of 1,856, a single constable, and a problematical future.”11 Anchorage’s economy was centered on the Alaska Railroad, but construction had moved north, and would be over by 1923. The exploitation of mineral resources looked bleak. North of Anchorage, the U.S. Navy abandoned its attempt to mine coal at Chickaloon to supply its Pacific fleet with a source of fuel. The cost of mining and shipping the coal from Alaska were too high. After halting work in 1922, the Navy moved progressively toward converting ship engines to burn oil instead of coal. South of town, gold had not panned out on the Kenai Peninsula, and there were little prospects in the Willow Creek and Cache Creek districts to the north. City revenue was poor, and there were few prospects for any improvement. During Conley’s term as mayor (1923-1924), he and others used dedication, made sacrifices, and relied on other pioneer families to keep Anchorage somewhat secure and stable. The federal government’s continued funding for the Alaska Railroad and development along the rail belt provided a stable, slim economic base.12

Conroy as Clerk and Mayor

In November 1920, Conroy became the first permanent Anchorage city clerk when the city government of Anchorage was formed. This was an important position because the city clerk functioned as Clerk, Treasurer, Assessor and Magistrate and as an administrator for the city under the mayor and city council. At $300 a month, Conroy was the highest paid city employee. Conroy resigned from that position in February 1923.

In an awkwardly worded February 17, 1923 editorial in the Anchorage Daily Times at the time of Conroy’s resignation, Edgar L. Bedell noted that Conroy was “an exceptionally competent official.” Bedell then remarked that “Perhaps Mr. Conroy’s methods of handling the offices have been abrupt; but on the other hand, perhaps these measures were necessary.” He commented on Conroy’s “strong convictions” and that he “has been criticized for this characteristic, which is a virtue in private life, but assumes the propensity of a fault while performing the duties of a public official.” The editorial concludes with a statement that Conroy would be hard to replace.13

Two months after resigning as city clerk, Conroy was elected mayor of Anchorage for a one year term, from April 1923 to April 1924. As mayor he met with President Warren G. Harding when Harding came to Alaska to open the Alaska Railroad in the summer of 1923. In a very close election in April 1924 (Conroy received 512 votes to local businessman’s Arthur A. Shonbeck’s 508), Conroy was again elected mayor, but submitted his resignation at the September 17, 1924 city council meeting, stating that he was leaving Anchorage for several months. In an article in the Anchorage Times, historian Stephen Haycox states that Conroy resigned “to save the town the cost of maintaining the office, and to see to his own interests.”14 Conroy was elected to the city council in April 1927, and served a one year term. He ran unsuccessfully for another term on the city council in April 1928.

Some of the major concerns of the municipal government during the period when Conroy served as either a councilman or mayor, as seen through the city council minutes, included attempting to purchase of the telephone and power system from the Alaskan Engineering Commission, reviewing a proposed franchise for buying electrical power for Anchorage from the Anchorage Light and Power Company, overcrowding in the schools and the need for a new school building, the expansion of the water and sewer system, additional street lights, sanitation issues (filthy dog yards and dairies, problems with garbage collection), street grading and stump removal, and construction of additional dock space.  There was the problem of what to do with vacant buildings, such as the one Austin E. “Cap” Lathrop had built for his movie The Chechahcos at the end of Third Avenue. In a lighter moment, the city council authorized $200 for Noel Wien to put on an “aerial circus” for Anchorage on the 4th of July, 1924.15

Conroy remained in Anchorage for the rest of his life. After leaving office, he continued to work in some capacity as a miner, but retired sometime before 1940.16 He had mining interests in the Willow Creek Mining District north and west of Palmer. He was a member of Pioneers of Alaska, Igloo 15, and one of the first members of the Cook Inlet Historical Society. Nellie Juriah Conroy died on September 5, 1946. Michael Joseph Conroy died on November 10, 1958.17 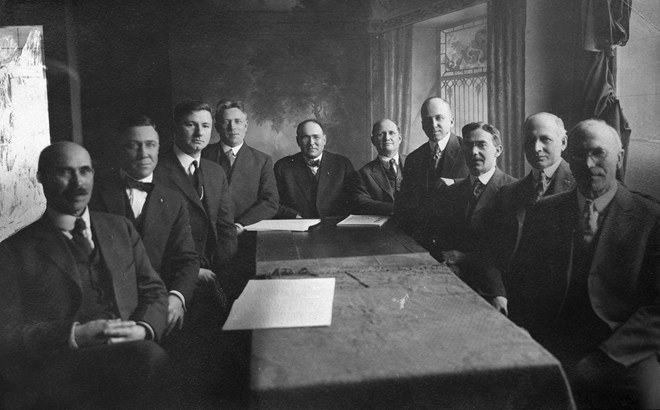 The first city council after incorporation, 1920, together with the city's clerk, attorney, and engineer. Michael Conroy is fourth from the left. Conroy was city clerk, the highest paid city employee with wide-ranging responsibilities. Mayor Leopold David is in the center of the photograph. 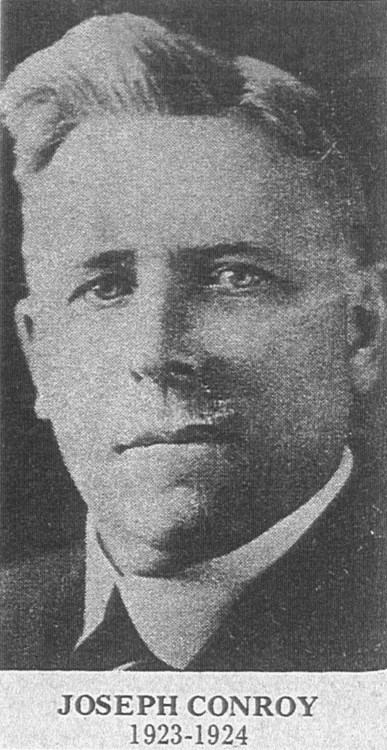 Portrait of Michael "Joseph" Conroy about the time he was either city clerk or mayor of Anchorage in the early to mid 1920s.

Courtesy of the Conroy family.