Ulysses Grant “U.G.” Crocker was one of the founders of Anchorage. Although his contemporaries held him in high esteem as a businessman, he was a prospector at heart and loved to hunt for gold. In an editorial in the Anchorage Daily Times published on June 16, 1937, the day after his death, he was called “a true pioneer of Alaska and one of the builders of Anchorage.” He became attracted to the “embryo city of Anchorage”[1] because of its potential for development and during his twenty-two years of residence was remembered for building his business, Crocker’s Department Store, into a full-scale department store.

Ulysses Grant "U.G." Crocker was born in Placer County, California on September 14, 1864, the youngest of eight children of Daniel B. and Fannie Abigail Starks Crocker. He grew up on the family farm, located near Roseville, California.[2] By the time he was sixteen years of age, in 1880, the family had moved to Carson City, Nevada, where his father was a laborer.[3]

Crocker went to Seattle, Washington at the age of eighteen. He was on the Pacific coast in 1898, and came to Alaska to join the Klondike gold rush. Upon his arrival in Dawson, Yukon Territory, he decided to go into business there. Like so many others, he found that all of the good claims had already been staked and immediately returned to Seattle, where he purchased a load of assorted goods. In Dawson, he sold out his inventory and then went to Nome, Alaska running a bakery on a scow as it floated down the Yukon River to the new gold camp. In Nome, he started its bakery and reportedly “made a fortune” before returning to Seattle.[4]

Crocker returned to Alaska and spent two winters in the Koyukuk country, where his mining operations did well. After returning to Seattle for a short stay, his next residence was in Valdez, where he established a store there and in Seward. When the Copper River and Northwestern Railway was being built by the Kennecott Corporation between 1908 and 1911 to take copper ore from Kennicott to Cordova in Prince William Sound, he went there and was hired to work on the project. He then moved to Idaho, where he engaged in farming for two years and then left for Chicago.

Crocker returned to Alaska in 1915, and came to Anchorage to open a furniture store.[5] He met and married Ida “Mary” Anderson, who was born in Helsinki, Finland, in 1876, and had come to marry a local homesteader. The Crockers made and repaired tents, awnings, and sleeping bags and their business thrived in the tent city.”[6] They opened their original store on 4th Avenue, between H and I Streets, in 1915. During the first years of his business, he was known particularly as a mattress maker.[7] He later moved from this unpretentious frame building to a new location at 4th Avenue and G Street, across from what is now the Old Historic Anchorage Federal Building (605 West Fourth Avenue, between F and G Streets).

Crocker’s furniture business grew with Anchorage, and he expanded it to meet the market, developing it into one of the earliest department stores. The Crockers built a two-story frame building (701 West Fourth Avenue) on the corner of 4th Avenue and G Street in Anchorage, west of the Lathrop building. He sold furniture and manufactured and sold canvass items, such as awnings, tents, wing covers and fuselage, mattresses, tents, and tarps. On the first floor, toys, jewelry, clothing, and notions were available for sale. Pillows, blankets, and sheets were sold in the basement. Later, they expanded their business to canvas automobile tops and wing fabrics for bush pilots’ airplanes.[8] Crockers became an establishment recognized for its large variety of merchandise, outfitting miners and trappers as well as local customers.[9]

The Crocker family lived in the rear of the second floor of the Crocker Building (701 West Fourth Avenue) and the store occupied the remainder of the structure. Ida "Mary" Crocker was a gourmet cook, and took great pride in entertaining friends. Their son, Eugene, was born in 1918.

On June 6, 1937, Crocker left Anchorage to start on a trip that would lead to his death. Along with his son Eugene and guide Elmer Simco, he embarked on a boat trip up the Koyukuk River, in search of a gold claim that he had discovered thirty years earlier. The previous year, he had sent men to the area to find his claim, but they failed. He then chartered an airplane to make a search, but the country looked different from the air and he could not spot his claim. Undaunted, he built a motorboat to go up the river. He was confident that he would recognize the ground if he approached from the water as he had traveled in this manner when he first discovered it. On June 20, ten miles above Koyukuk Station, while enroute to the upper Koyukuk River, he was at the wheel of his boat, steering the vessel when, without warning, he collapsed from a heart attack and died.[11]

Ida "Mary" Crocker and her son, Eugene, continued to run the department store until she retired. She moved to Seattle, and died there on November 15, 1968. Eugene Crocker married Irma Wahl and they had three children: Linda Gene White, Arlene Mary Bennett, and Eugene Charles. 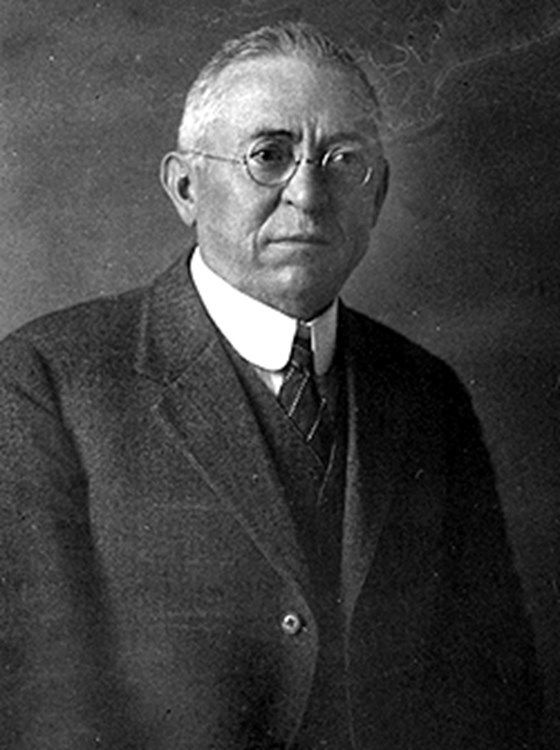 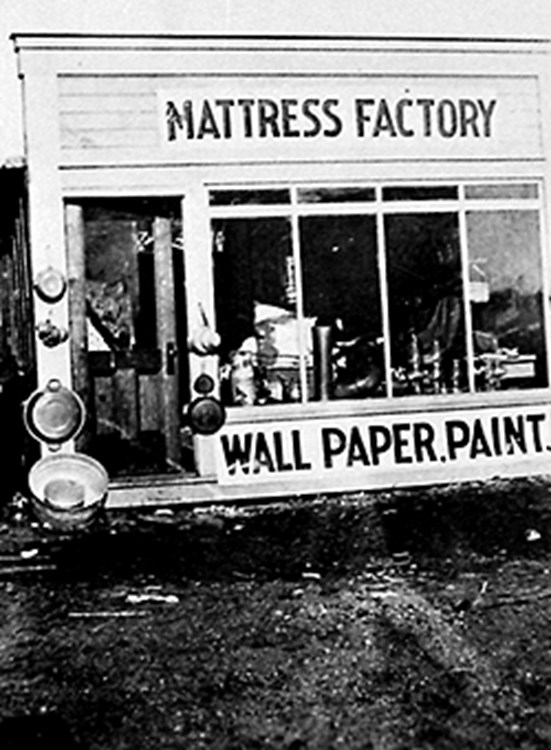 The Crockers' original store, on 4th Avenue between H and I Streets, Anchorage, 1915. 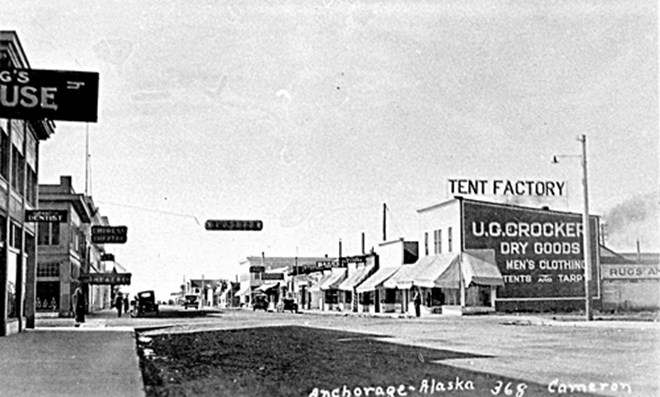 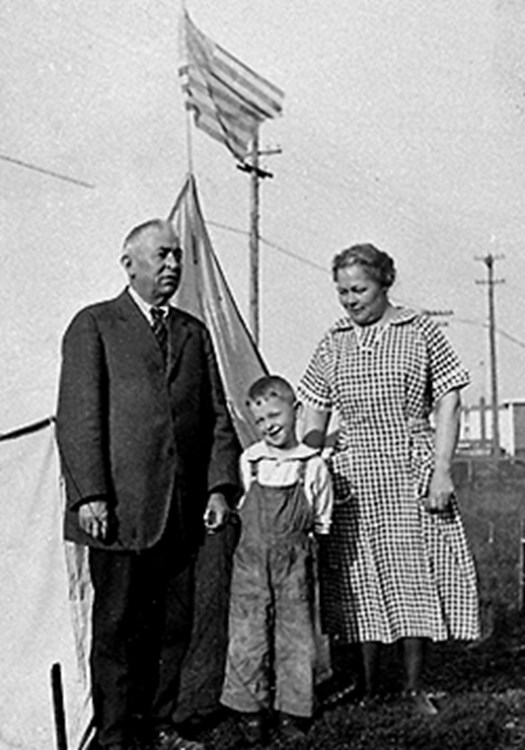 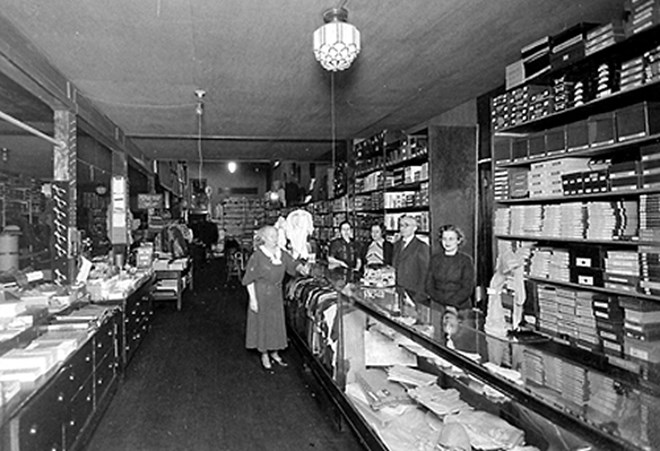 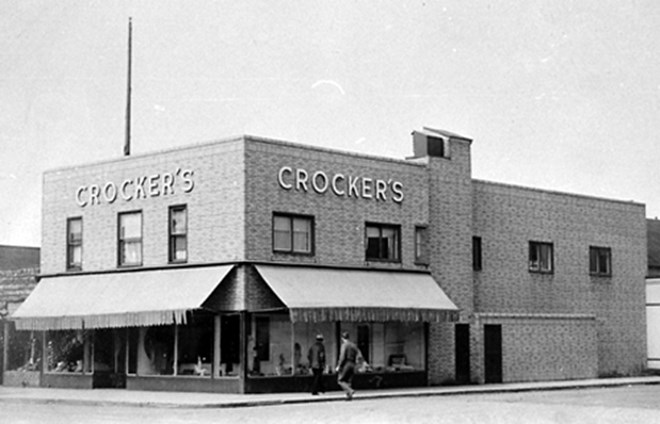 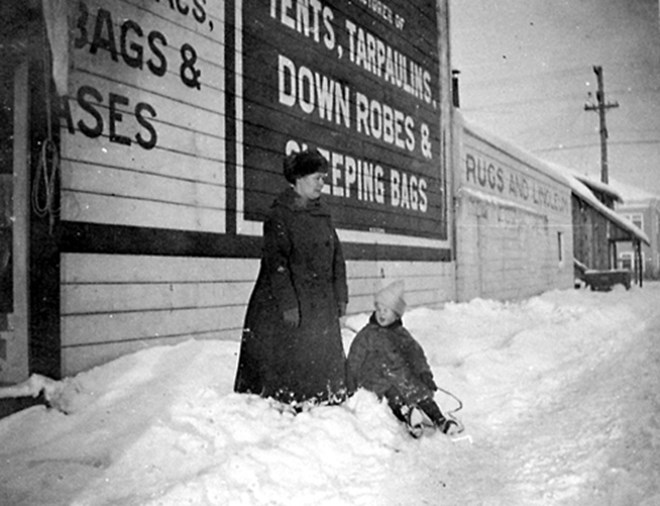 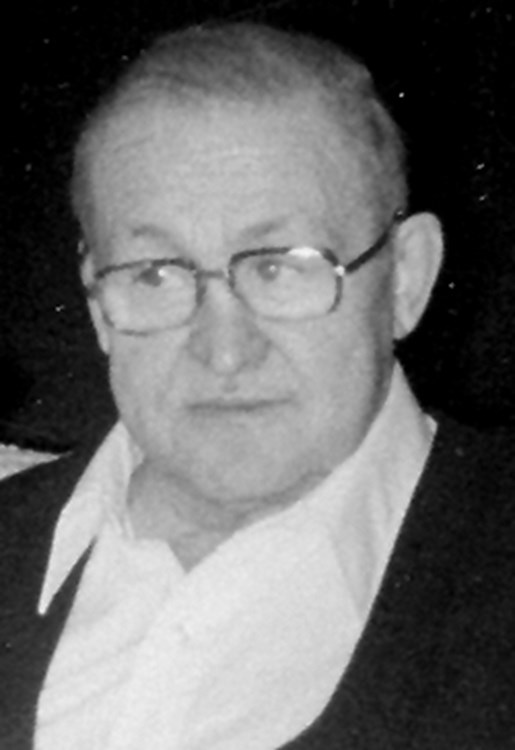 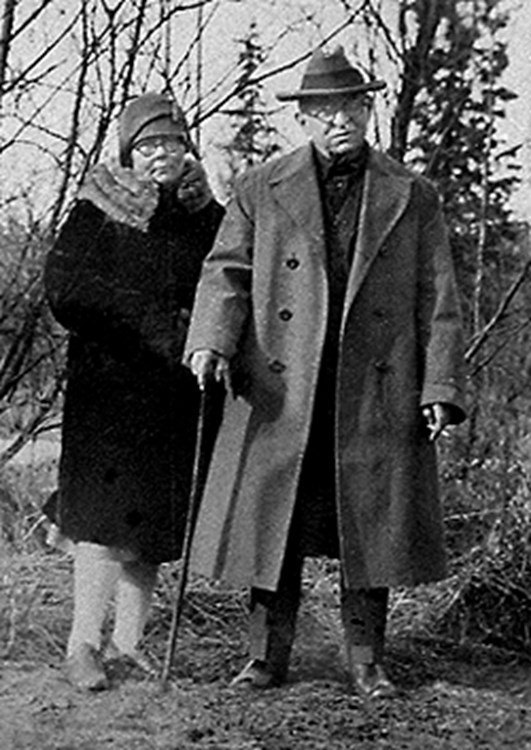 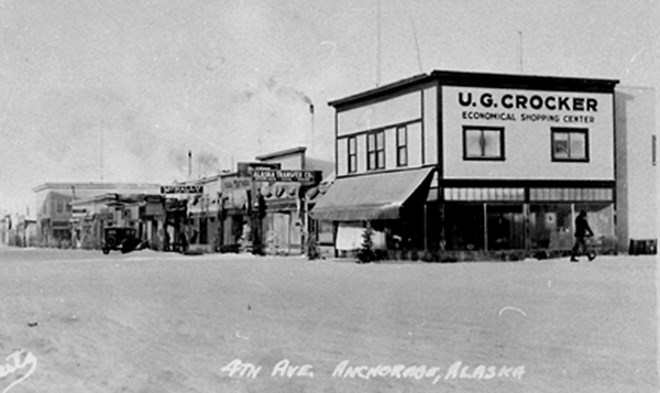 [8] Mary Crocker continued the canvas operation after her husband’s death in 1937, and until she passed away in 1968. Evangeline Atwood, Anchorage: Star of the North (Tulsa, OK: Continental Heritage Press, Inc., 1982), 56.

[9] Michael Carberry and Donna Lane, Patterns of the Past: An Inventory of Anchorage’s Historic Resources (Anchorage: Community Planning Department, Municipality of Anchorage, 1986), 78-79.