Dan Cuddy presided over the First National Bank of Anchorage (now First National Bank Alaska) for more than seven decades (1943-2015) as president, chairman, or as a member of the bank’s board of directors. His was a career remarkable for its duration and for its impact on the development of the state. On May 13, 2015, the Alaska Dispatch News gave this assessment:

“Cuddy’s conservative approach to lending was widely credited for ensuring its [First National Bank Alaska] survival through a disastrous recession in the late 1980s, when about a dozen banks and credit unions in the state collapsed.” Bill Popp of the Anchorage Economic Development Corporation said: “He had a strong conservative hand at the helm of his bank, but at the same time he had a willingness to invest in the community.” He was “one of the great leaders that helped build Alaska.”1

Early Years in Valdez and Anchorage

Daniel Hon Cuddy (also known as “Dan” or “D.H.”), son of Warren Cuddy and Lucy Hon Cuddy, was born on February 8, 1921 in Valdez, Alaska, a town of five hundred residents. His father was trained as a lawyer, but was engaged in the dry goods and mercantile business in Valdez until 1921. The couple had come to Valdez separately, but had a common goal of adventure. His mother, Lucy Hon Cuddy, a teacher and the Valdez school principal, met Warren in Valdez in 1916. They married in 1917, and quickly became a productive part of the local community. They had two sons, David Warren Cuddy, born in 1919, and Daniel Hon Cuddy.2

Warren Cuddy was the clerk of court and, later, U.S. district attorney of the U.S. District Court for the Third Judicial Division at Valdez. The elder Cuddy, a Republican, was replaced as U.S. district attorney when Franklin D. Roosevelt was elected as president. The Cuddy family moved to Anchorage when Warren Cuddy set up a private law practice. In the 1930s, he gradually bought stock in the First National Bank of Anchorage. In 1941, when Anchorage’s population began to grow rapidly due to the pre-World War II military build-up, Cuddy purchased controlling interest in First National and assumed the role as bank president.3

Dan Cuddy grew into a sharp, industrious, and intelligent young man, raised in the family’s tradition of having a spirit of adventure and becoming a productive member of the community. Dan attended Anchorage High School and was active in sports. Both he and his brother, David, were on the basketball team. They both participated in outdoor wildlife adventures, running a trap line along Ship Creek, duck hunting on the Cook Inlet mud flats, and moose and sheep hunting in the Chugach Mountains. As a young boy, Dan delivered newspapers and worked as the groundskeeper for the Anchorage Golf Course, then located on the Delaney Park Strip.

In the summer of 1938, at the age of seventeen, Dan Cuddy was employed by the Emard Packing Company, one of the largest private employers in Anchorage. After Emard had fired the cannery manager because of his drinking, Dan boldly came forward and proposed that he run the cannery and its thirty employees along the “slime line.” Emard agreed, saying: “I hand you this leaky boat.” He was promoted to cannery superintendent. Cuddy later asked Emard to join the board of directors of the First National Bank of Anchorage. Dan then worked as a heavy equipment operator at Farewell Lake, as a commercial fisherman, and as a gold miner.4

Dan Cuddy attended Stanford University from 1940 to 1942, taking courses in pre-law, but his education was interrupted when the United States entered World War II. On December 8, 1942, he enlisted in the U.S. Army as a private. 5 He then entered Officer’s Candidate School, where his leadership ability was recognized, and he was promoted to captain within twenty-one months. Dan served in the 1255th Engineer Combat Battalion, which was attached to General George S. Patton’s Third Army on his campaign across Europe in 1944-1945. Dan fought in the Battle of the Bulge and Luxembourg, and he was among the troops who assisted in the closing of the Buchenwald concentration camp near Weimar, Germany. While on active duty, he was elected to the First National Bank’s board in January 1943.6

In 1945, Dan Cuddy returned to civilian life. He completed his bachelor’s degree in economics at Stanford University. Upon graduation, he attended law school at the University of Washington. He was a law clerk for a year for his father, passed the bar exams, and prepared to enter the legal profession.7

While in law school, Dan Cuddy met Betty “Betti” Jane Puckett, a school teacher from O’Neill, Nebraska. As a young woman, she taught high school in Grand Island, Nebraska before her marriage to Cuddy in 1948.

Dan Cuddy’s early legal work focused on adoptions. He became the junior partner in his father’s law firm, Cuddy & Cuddy. On the death of his father in 1951, he took over management of First National Bank of Anchorage and became bank president. At the time, he may have been the youngest chief banker in the country.8 In 1950 the bank had four officers and forty- three employees, and had deposits of $20,500,000.9 His mother, Lucy Cuddy, became the chairwoman of the bank’s board of directors.

During Dan Cuddy’s long tenure as president of First National Bank of Anchorage,10 he influenced the major economic trends of Alaska. On March 27, 1964, a 9.2 earthquake struck southcentral Alaska, near the town of Valdez. The Alaska Earthquake inflected heavy damage on First National’s fifty-eight year old headquarters building. Cuddy announced a new building project to demonstrate “confidence in Alaska.” He became the first Alaska business leader to announce reconstruction plans after the earthquake. These included building eight additional floors of modern office space atop the Bank’s drive-in branch, adjacent to the original site of the bank at Fifth and G Street in downtown Anchorage. First National also placed additional funds into the reconstruction of quake areas across the state.11

On September 10, 1969, the State of Alaska conducted a well-publicized lease sale on 179 tracts of oil-rich land of North Slope lands at Prudhoe Bay. The proceeds amounted to more than $900 million, more than three times the annual state budget. Deposit checks of the sum were loaded into bags and flown by charter jet to New York City, chosen because of its location in the Eastern Time Zone allowing the money to gain an extra day’s interest for the state.  First National Bank aided by supervising the transaction.12

In 1982, Dan Cuddy became chairman of First National’s board of directors after his mother, Lucy, died. That same year, he stepped down as bank president. J.P. Pfeifer, formerly senior vice president of the bank’s Deposit and Loan Division, became the new president.13

By 1986, Alaska’s economic bust had begun when oil prices crashed as consumers and industry conserved energy and moved toward lower priced fuels. Oil prices dropped in 1985, but fell much more in 1986, to one third of what they had been at the peak, when prices dropped to less than $10 per barrel. In 1982, the State of Alaska received 86.5 percent of its revenue from the oil industry. An economic recession hit Alaska as oil prices plunged, with Alaska’s unemployment rate averaging about eleven percent. Many Alaskans left for jobs Outside, with more than 11,000 residents leaving Anchorage alone.14

The economic downturn that struck Anchorage rocked but did not sink First National Bank. Dan Cuddy had felt that the economy had become overheated, particularly the oversupply of real estate, and maintained a conservative loan policy. In an interview with the Alaska Journal of Commerce in 2012, he said that the First National Bank had made calculated decisions to start pulling back from speculative lending a few years before the recession hit. Cuddy said: “We took a beating. We lost deposits. But on the other hand, we came out of the ‘80s still here.”15 A total of fourteen Anchorage banks and savings and loans were forced out of business because of bad loans.16

By the time Cuddy stepped down as president of the bank, its assets exceeded $3 billion dollars.17 In 2001, the bank adopted the name First National Bank Alaska to reflect its statewide focus through its many branches.

Dan Cuddy received many awards from civic and industry organizations during his lifetime. In 1965 the Anchorage Chamber of Commerce gave him its Gold Pan award for individual achievement. He was named Alaskan of the Year in 2002. In 2006, the Anchorage Chamber of Commerce presented him with the William A. Egan Outstanding Alaskan Award. In 2007, the Armed Services YMCA of Alaska dedicated its Welcome Center on Elmendorf Air Force Base in his name. The Associated General Contractors of Alaska awarded him their Hard Hat Award in 2009 in recognition of the First National Bank’s support of building loans.18 In 2012, he was the recipient of the Shalom Peace Award for his military service as a member of one of the military units that liberated the Buchenwald concentration camp, and for his role in its final closure.19

Active in civic affairs, Cuddy was a member of the Anchorage Chamber of Commerce, Alaska State Chamber of Commerce, Alaska Bankers Association, Alaska Bar Association, Alaskan Command Civilian Advisory Board, and the Elks Club. He was a member of the boards of directors of the Alaska Rural Rehabilitation Corporation and the Petroleum Club of Anchorage. In 1958, he served as president of the Alaska South Chapter of the Association of the United States Army. In 1978, he was appointed Honorary Consul of the Netherlands for Alaska.20

The Municipality of Anchorage rededicated the Midtown Park as the Cuddy Family Midtown Park, near East 40th Avenue and A Street, in 2000. The Cuddy Family donated 9.5 acres of land and provided funding for construction of park amenities.21

Cuddy remained on the bank’s board of directors until his death in 2015. His daughter, Betsy Lawer, currently serves as First National Bank Alaska’s chair and president.

Daniel Hon Cuddy died on May 12, 2015 at the age of ninety-four. He was preceded in death by his wife, Betti Jane Cuddy (1924-2010).22 They are buried in the Masonic Tract of Anchorage Memorial Park Cemetery. 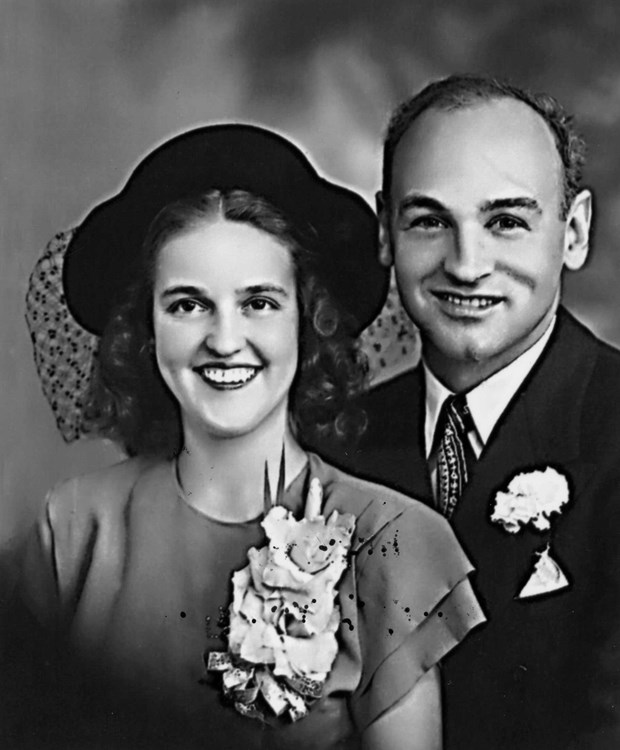 Dan with his bride Betty Jane Puckett, a schoolteacher who grew up in Nebraska. They were married in 1948 and then came north to Alaska in spite of Betty’s reservations about living in Alaska. 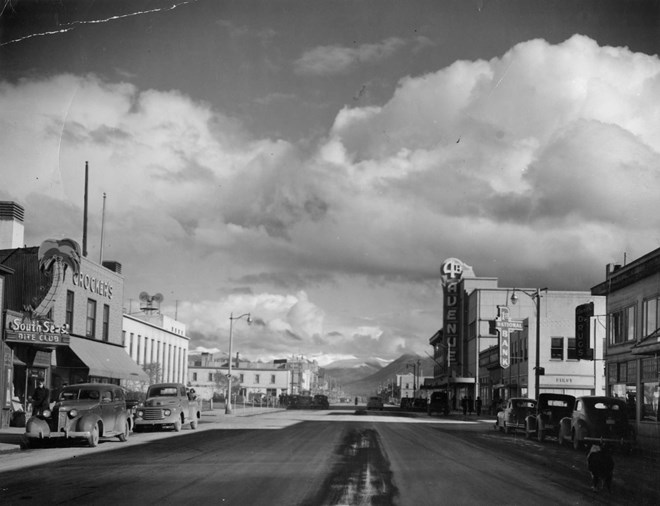 The large sign for the First National Bank of Anchorge is visible on the right hand side of the image. After the 1964 earthquake, Dan Cuddy caused the bank to be rebuilt, with additional stories, indicating his faith in Anchorage’s future.

Dan and Betty Cuddy in 1977, in the center of the image, facing the photographer. The man standing with his arm outstretched is U.S. Senator Ted Stevens; Mrs. Stevens has her back to the camera.