Christian “Chris” Magnus Eriksen Eckmann and his wife, Leonora, were among the first merchants of Anchorage when it was still a tent city named Ship Creek. They began selling furniture from their tent during the summer of 1915, and then moved to the new townsite later that summer.1 Their enterprise expanded gradually until it became one of the largest furniture stores in Alaska. On the twenty-fifth wedding anniversary of Chris Eckmann and his wife, Leonora, in 1936, the Anchorage Daily Times, reported that their store had “put overstuffed furniture in most of the homes in the territory.”2 Eckmann was elected to the Anchorage City Council in 1923, and served as a council member until January 1, 1926, when he became Mayor of Anchorage after the resignation of Charles Bush. He was elected to one term as Mayor (1926-1927) and then again was elected to the city council (1933-1934).

Christian Magnus Eriksen Ekmann was born on May 27, 18743 in Østerhoved, Givskud Parish, Nørvang District, Vejle County, Denmark, the fourth of six children of Magnus Erikson Ekmann and Anne Maria Hansen.4 He immigrated with his family to the United States in either 1876 or 1878, settling in Eureka, Polk County, Wisconsin.5 His father was a farmer. After the family came to America, their surname was anglicized from Ekmann to Eckmann.

As a young man, Eckmann worked in the lumber business in North Dakota. He moved west to Seattle, Washington in 1906, where he continued working, at times, as a salesman in the wholesale lumber business. He became a traveling salesman for the Dorbecker Furniture Manufacturing Company of Seattle, Washington, from 1913 to 1915.6 During this period, he and his brother, Harry, operated their business, “Eckmann Bros.” (1910) or “Eckmann Bros. & Co., Inc.” (1913), a wholesale furniture dealer in Seattle.7

During his years as a traveling salesman, Eckmann met Louise Leonora Henderson Huckaba, a divorcee who had four children. Leonora was born on June 13, 1873 in Collinsville, Texas.   Although they both lived in Seattle, the couple married in Vancouver, British Columbia, on March 16, 1911.8

Eckmann was one of the first settlers to arrive in Ship Creek in May 1915. Like other hopefuls, he rushed to the railroad construction camp to take advantage of business opportunities that could lead to a better life, economically and otherwise. President Woodrow Wilson announced in April 1915 the selection of the so-called western or Susitna route for a federal railroad in Alaska, running from Seward (a year-round ice-free port on tidewater) to Fairbanks. As early as February 1915, speculation that work would soon begin on constructing a line between Ship Creek and the Matanuska coal fields caused hundreds to move to the area. This set off a stampede in March 1915 to the creek flats, which became the site of a tent city. In June 1915, the townsite had more than two thousand people.9

Eckmann and his wife, Leonora, began selling furniture from their tent on the Ship Creek flats soon after their arrival. His first job was working as a clerk with the Alaskan Engineering Commission while Leonora handled the furniture business. In 1916, they built a small store, Eckmann’s Furniture, on Fifth Avenue and K Street. An advertisement, published in 1916 in the Cook Inlet Pioneer, stated that his store was now open for business. It featured: “furniture, bed springs, mattresses, chairs, rugs, carpets, linoleums, window shades, stoves, ranges, Columbia gramophones, and the latest records.”10

Eckmann left his job with the Alaskan Engineering Commission (AEC) to concentrate on the furniture store, but there was not enough business to pay for a large inventory. In 1918, he went back to work for the AEC, as a baggage man, on the Anchorage to Chickaloon run, which made him well-known in Anchorage and along the railbelt. Years later, Eckmann recounted on his twenty-fifth wedding anniversary, that “he made the run from Anchorage to Chickaloon and knew every turn in the road and resident along the line.”11 In 1924, he finally left the Alaska Railroad to devote his full time to his Eckmann’s Furniture Store.

In the early 1920s, the connections Eckmann made while working for the Alaska Railroad helped promote his furniture business and led to the expansion of his store on Fifth Avenue and K Street. They purchased the building adjacent to the First National Bank at the corner of Fourth Avenue and G Street.12 By the mid-1920s Eckmann’s Furniture moved to its final home, a building on Fourth Avenue. Austin E. “Cap” Lathrop’s 4th Avenue Theatre was built just to the east of Eckmann’s store in 1946.

Civic and Community Activities in Anchorage

Eckmann maintained an active interest in local civic affairs and community matters. He served on the ‘Committee on Manufacturing’ for the First Annual Alaska Agricultural and Industrial Fair, held in September 1917. He was elected to the Anchorage City Council in April 1923 and served until January 6, 1926, when his fellow council members appointed him to replace Charles Bush as mayor, when Bush resigned, effective January 1, 1926. In April 1926, Eckmann was elected to a one-year term as mayor, running against Mrs. W.S. Herning. Eckmann served until May 1927, when he was replaced by Will Clayson.  On April 4, 1933, he was elected to the city council for another two-year term.13

During Eckmann’s first two terms on the Anchorage City Council, 1923-1926, the City of Anchorage continued attempts to purchase the city telephone and electrical transmission system from the Alaska Railroad. A major concern was the development of alternative sources of electrical power, other than coal and steam, to serve both Anchorage and the railroad. When Eckmann was first elected to the city council, Anchorage purchased its electric power from the AEC, which had a coal-fired power plant close to Ship Creek. Frank Reed, Sr. headed a group of businessmen, incorporated as the Anchorage Light and Power Company, who wanted the city to grant them a franchise to provide electric power from a hydroelectric plant they proposed to build using the Eklutna River. During the mid-1920s, this issue was placed before the Anchorage voters twice and was defeated twice. When the Eklutna power project was completed in 1929, the Alaska Railroad agreed to use hydroelectric power supplied by the Anchorage Light and Power Company. After switching to the Eklutna system, power was produced more cheaply than from the steam plant. Voters approved the franchise, and Anchorage Light and Power Company supplied electricity to Anchorage until the 1950s.14

During the 1920s, Anchorage’s city government struggled with the usual problem of trying to find funds for services demanded by citizens. During Eckmann’s period as mayor (January 6, 1926-May 9, 1927), there were a number of issues that were dealt with concerning aviation, public health, tourism promotion, and attempts to acquire large tracts of land owned by the Alaska Railroad to raise local revenue. The city agreed to build an airplane hangar at Merrill field.15 The City of Anchorage agreed to contribute $200 to the operation of the Anchorage Chamber of Commerce’s “information bureau” for the benefit of tourists and travelers.16 The city hired a public health official to deal with an outbreak of measles and, later, of scarlet fever.17 The city investigated how to obtain city ownership to 225 lots owned by the Alaska Railroad in Anchorage, so the lots could later be sold to generate property taxes and other revenue.18

Eckmann was re-elected to a two-year term on the Anchorage City Council on April 4, 1933. Under Mayors Thomas J. McCroskey and Oscar S. Gill, city officials obtained whatever federal assistance was available. For instance, during the winter of 1933-1934, the federal Civilian Works Administration (CWA), an emergency public employment program, allowed the city to hire unemployed men and women. CWA workers replaced telephone poles, and cleared streets, alleys, the cemetery, and what is now the Delaney Park Strip of brush. Other work included lengthening the runways at Merrill Field, repairing fences around the baseball field, and shoring up the foundation of the community building. The largest project was digging and laying over two thousand feet of major sewer and water line, done during the mid-winter cold. For a short period, up to ninety men were authorized to work on this project. The city council was informed that just the sewer work performed saved the city $10,000. Women were given what would be considered marginal work today, for example, to sew clothing that was to be distributed where needed.19

Under Mayor Oscar S. Gill, the Anchorage City Council sought to alleviate problems with the city’s water supply. Eckmann was a member of a committee that selected a gravity-fed water system for the city’s needs. The system was estimated to cost $125,000, and the council had the proposition put before the voters in April 1934. The proposition was approved, but the new system was still not in place ten years later.20

Eckmann served his community well, not only as a mayor and councilman, but also as an athlete. He was one of the organizers of the first baseball teams in Anchorage and was a valuable player for many years. He was prominent in fraternal circles, holding memberships in the Masons and the Shriners. He was a charter member of the Benevolent and Protective Order of Elks, Fraternal Order of the Eagles, and the Independent Order of Odd Fellows. He was a director and vice-president of the First National Bank of Anchorage. In January 1936 he filed to run for the Alaska Territorial House of Representatives.21

Eckmann continued to operate his furniture store until 1937. During the winter of 1936-1937, Eckmann was diagnosed as having pneumonia. He continued work at his business despite his illness until friends took him to the hospital, where he died a few hours later on January 21, 1937, upon suffering a heart attack. He is buried at the Evergreen Washelli Memorial Cemetery, Seattle, Washington.22

Eckmann’s widow, Leonora, sold Eckmann’s Furniture Store and its stock in 1938, when it was purchased by Anchorage pioneers Fred and Helen Carlquest. Leonora continued to own the building. Leonora moved to Seattle, Washington, in 1950 to live near her daughter, Irma Irene Larson. Louise Leonora Henderson Huckaba Eckmann died in 1953 in Seattle, and is interred at the Acadia Memorial Park, Seattle.23

The name of Eckmann’s Furniture remained essentially unchanged until April 1962, when Eckmann’s Furniture and Draperies Store was purchased by Leslie Nerland and his sons, Jerry and Ron Nerland. The store was renamed, “Nerland’s Home Furnishings,” and was operated as a separate corporation from the family business in Fairbanks.24 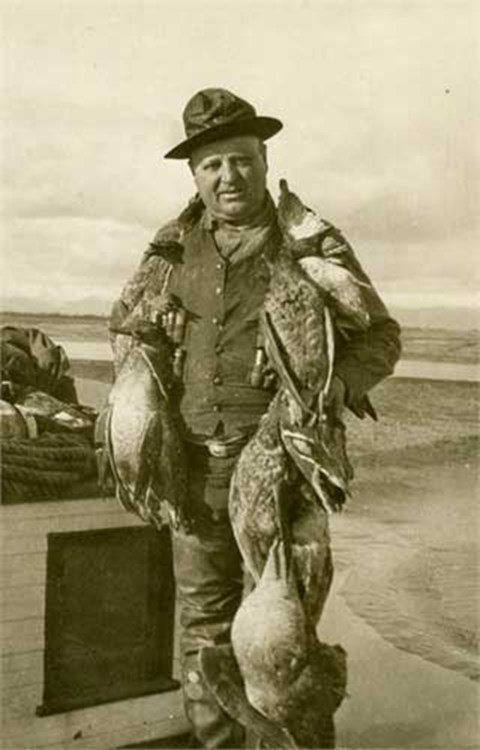 Christian "Chris" Eckmann with the waterfowl that he shot in Cook Inlet. Hunting waterfowl in the fall was a major activity in early Anchorage, with groups of friends chartering boats from the ‘mosquito’ fleet to take them to the west side of Cook Inlet to hunt. A brief note in the Anchorage Daily Times on August 30, 1926, reads: “Duck hunting is the main topic of discussion about town and will probably hold the center of interest for some time.” 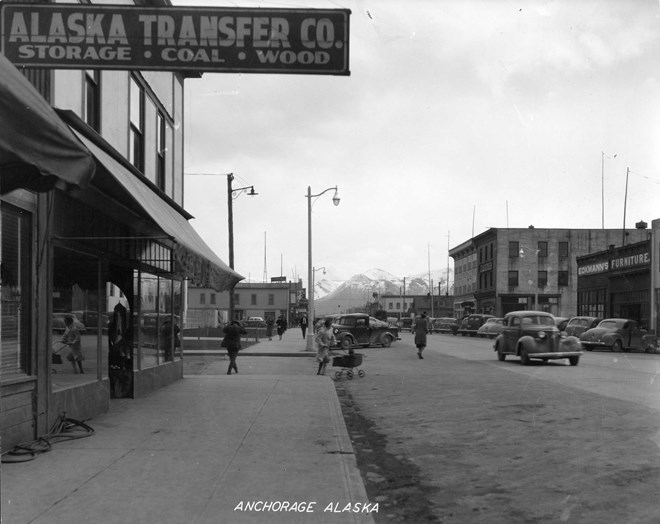 Eckmann’s Furniture storefront on Fourth Avenue. The large vacant lot next to the store will be filled by the Fourth Avenue Theater. 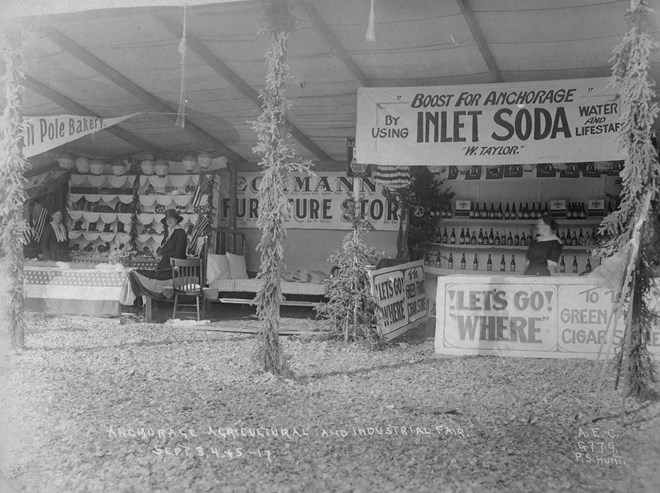 Eckmann’s Furniture booth at the 1917 Anchorage Fair, organized through the Alaskan Engineering Commission (AEC) to showcase local agriculture, industry, and commerce. Christian "Chris" Eckmann was working for the AEC through much of this period; his wife, Louise Leonora, ran the store. 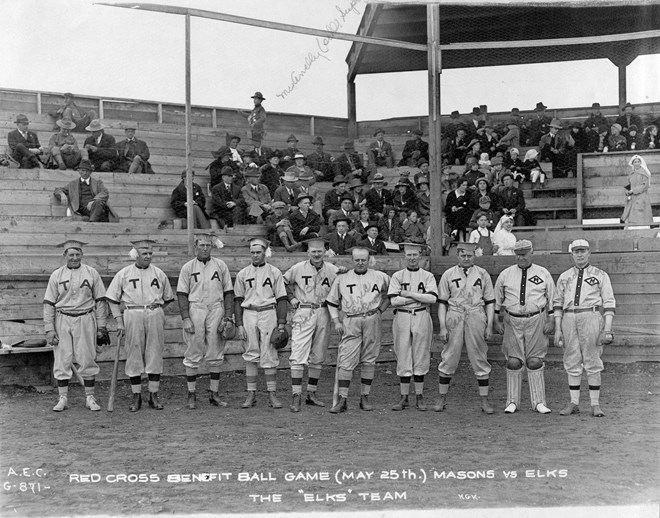 Christian "Chris" Eckmann, the fifth man from the right, playing for the Elks against the Masons on May 25, 1918. Eckmann holds a baseball bat in his right hand, running down his right leg. Baseball was very popular in early Anchorage; the ballpark was where the Anchorage Museum now stands. 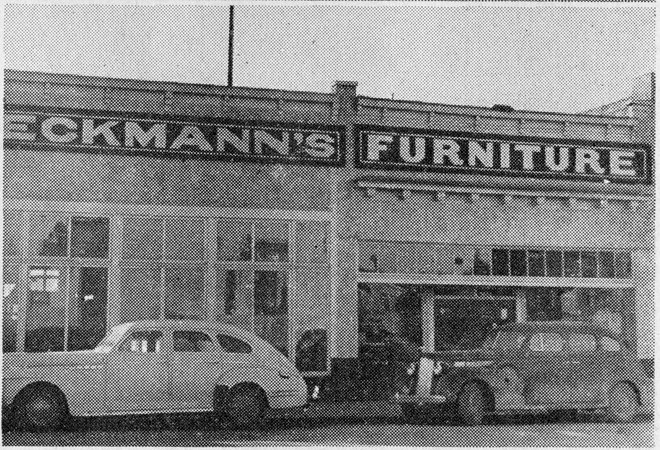 Courtesey of the Eckmann family.