Trained as a civil engineer, Morgan Christopher “Chris” Edmunds was the superintendent of roads for the Fairbanks District (1923-1926) and for the Third Judicial District (1926-1949) for the Alaska Road Commission. Edmunds is credited with constructing many of the early roads and trails in the Anchorage and Fairbanks area that became connected with the primary through road system along “The Railbelt” in southcentral and interior Alaska.

The position of superintendent of roads was created in 1913, when the Board of Road Commissioners for Alaska created the post when it divided the territory into districts, with sub offices, and with a civil engineer in charge of each district. Each superintendent was responsible for planning and overseeing road building projects by being in charge of all work parties. The superintendent also acted as a disbursing officer for the Board with control over funds, property, and records.1

Edmunds was born in Llandough, Wales, the youngest of six children, on November 25, 1883. He followed in the footsteps of his father, John Christopher Edmunds, a civil and mining engineer. His mother was Sarah Richards.2 He obtained an engineering degree in Cardiff where he lived most of his early life. Edmunds traveled around the world several times aboard sailing ships and at one time was a professional pugilist, a medal winning swimmer and diver, and a runner for the British Army during the South African Boer War (1899-1902).3

Edmunds immigrated with his family from Wales to Johannesburg, South Africa, in 1896. Soon after, his mother, Sarah, died. Edmunds went to Canada, arriving in Halifax, Nova Scotia, in April 1905, and then moved to Ottawa. In June 1908, he left Ottawa by train for the Pacific coast and boarded the steamship Princess May for Skagway, Alaska, arriving on June 19, and then made his way to Fairbanks.4 According to family lore, Edmunds staked an unsuccessful gold claim in the Iditarod region but missed the beginning of the Iditarod Gold Rush (1909-1910). In August 1908, he filed a declaration of intention or application for U.S. citizenship at the U.S. District Court in Fairbanks. He did not meet the minimum two-year residency requirement.5 Edmunds left Alaska sometime after 1908 and did not return until June 1913. On May 31, 1913, he filed a new declaration of intention at the Superior Court, King County, Seattle, Washington, to become an American citizen after a five-year minimum residency period.6 He returned home to Fairbanks. He eventually became a naturalized U.S. citizen in 1919.7

The Alaskan Engineering Commission, a federal agency, is also known by its initials (AEC) or alternate spelling, Alaska Engineering Commission. In 1914, the AEC was created by Congress for the purpose of developing the territory by constructing a railroad system from Seward to Fairbanks.9 In 1923, after construction was complete, it was renamed as the Alaska Railroad.

Edmunds was sent with a group of AEC employees as a burial detail to Fort Yukon, an Alaska Native village hit hard by the Spanish influenza epidemic in 1918 and early 1919. There he met Lulu Beatrice “Betty” Nuneville, an Episcopalian deaconess missionary nurse who was on the staff of the Episcopal Church at Fort Yukon. Nuneville was born in Germantown, Pennsylvania, on April 15, 1886. She attended deaconess school in Philadelphia and, after graduation, was accepted at the Episcopal School of Nursing in Philadelphia. She was sent by the Episcopal Church to Fort Yukon to work with Archdeacon Hudson Stuck and was there during the influenza epidemic.10

Edmunds and Nuneville were married on October 16, 1920, in Tanana and then moved to Healy where Edmunds worked as an engineer. The couple’s first home was a converted boxcar. In 1923, they moved to Fairbanks where Edmunds was appointed to the post of superintendent for the Alaska Road Commission, Fairbanks District. The couple had two daughters and a son (Elizabeth, Sarah, and Morgan C. Jr.) while they lived in Fairbanks. In 1926, Edmunds accepted a position in Anchorage, where he became the superintendent of roads for the Third Judicial District.  One of the Edmunds children remembered that “summers in the early 1930’s were wonderful times for the family when father was building the roads in McKinley Park. The family took the train to the Park and we lived with the road crews, moving along as the work progressed. Sometimes we would have a cabin to live in . . . . sometimes live in . . . . it would be a ‘wannigan’ (a sort of tent with wooden sides halfway up on a wooden floor).” As they became older the children were sent to Philadelphia to attend school.11

In Anchorage the Edmunds family took up church activities and participated in public causes. By 1942, Edmunds had an impressive list of accomplishments with the Alaska Road Commission. Under his direction, the portion of the Glenn Highway from Palmer to Glennallen was built, the road in Mount McKinley National Park from the Alaska Railroad hotel to Wonder Lake was built, the old Seward Highway from Anchorage to Potter was completed, and the Anchorage-Palmer highway was finished. Other accomplishments were the road and seawall at the Homer Spit, the connecting road from Pile Bay to Lake Illiamna, and interconnecting roads in the Matanuska Valley and Hatcher Pass area. In 1939-1940, he had a connecting canal dug between Lake Spenard and Lake Hood to accommodate the increasing number of float planes in the Anchorage.

Morgan Christopher Edmunds retired from the Alaska Road Commission in 1949, and moved to Seattle, Washington. He died in Seattle, Washington, on February 7, 1958.12 His ashes were scattered over Alaska. His wife, Lulu Beatrice “Betty” Nuneville Edmunds, died in Seattle in 1980. The Morgan C. Edmunds Collection is held by the Anchorage Museum’s Atwood Research Center, and is open for research. 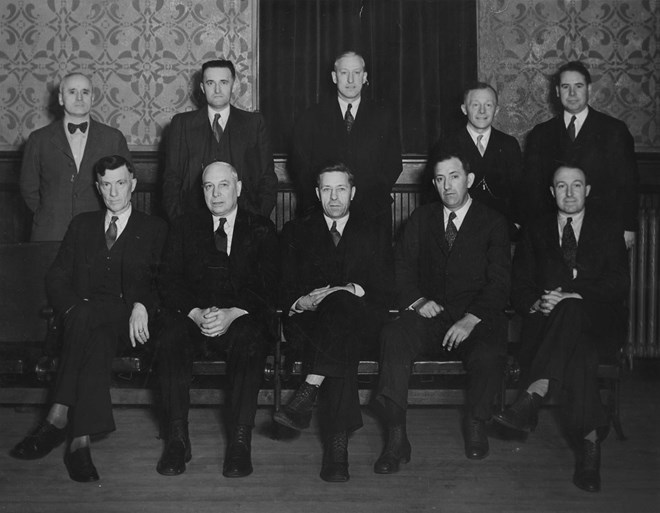 Morgan Christopher "Chris" Edmunds stands on the far left in the second row.