"Judge" J. Lindley Green was an attorney in Fairbanks and Seward.  He became the assistant district attorney for the Third Judicial Division in Seward.  In 1924, he was appointed as registrar for the U.S. Land Office in Anchorage.

One of the early lawyers who came to Alaska during the Klondike Gold Rush was Joseph Lindley Green, commonly called “Judge” Green (also known as "J. L." or "J. Lindley"), who was born on August 19, 1858 in Missouri of Quaker parents, Robert and Mary Green.1 He moved to Utah as a young man and engaged in politics in Salt Lake City before moving to Seattle, Washington, which according to his obituary in the Anchorage Daily Times, was “then a small settlement.” He married Ida Esther Gould, born in March 1867, on February 15, 1897 in Seattle.2 In August 1898, Green left Seattle and came to Alaska with thousands of other gold seekers, landed at Skagway, and then made his way over “the Skagway trail” to the Yukon Territory.3

According to Green’s obituary, Dr. Joseph H. Romig interviewed Green shortly before his death in 1941 about his experiences in the north. Green told him about being appointed judge by his fellow passengers on the steamer Willamette going to Skagway in the summer of 1898. A thief was caught, and Green initially sentenced him to be dragged behind the ship on a rope. The terrified thief begged Green to reconsider, and the next morning Green decreed that the thief would not be allowed to land at Skagway but would be returned to Seattle on the ship.

By 1901, Green was the manager of the Dawson Water Works in Dawson, Yukon Territory. He left Dawson and moved down the Yukon River to Rampart in Alaska, where he worked as an attorney from 1901 to 1902.4 In 1903, he was appointed the first U.S. Commissioner in Rampart. In remote areas like Rampart, the U.S Commissioner served as the ex officio justice of the peace, recorder, and probate judge. Green continued living in Rampart until sometime after 1905, when he then moved to Fairbanks to practice law.

By 1909, Green was living in Seward. In July 1909, he was appointed as the assistant U.S. district attorney in Seward, the location for the U.S. District Court (Third Judicial Division) at Seward.5 The town of Valdez was the headquarters for Third Judicial Division, which included all of southcentral Alaska and also a two-thousand mile stretch of the Alaskan Peninsula and the Aleutian Islands.

The year 1910 was eventful for Green. He drafted two bills for Congressional action, one to record vital statistics such as births, deaths, and marriages for Alaska, and a second to establish a board of health and charities to oversee health care in Alaska and the care of indigents.6 Green was also chosen by the Seward business community to be on a committee to draft a resolution calling for the creation of a federal land office in Alaska’s Third Division.7 At that time land transactions for the Third Division were handled by the Juneau Land Office, a burden for the residents of the Third Division.8

Green’s duties as assistant district attorney led to his traveling around Alaska's Third Judicial Division. In July 1910, he joined a judicial party, the so-called “floating court,” going to the Aleutians and Nushagak.9 In geographically remote areas, judges sought to meet the challenges of providing justice by holding court terms in outlying communities. Judges, marshals, and other court officials were brought to remote towns and villages, by ship, to provide justice.10 On December 10, 1910 he was aboard the steamer Olympia when it struck a submerged reef on the west shore and went aground on Bligh Island or reef, near Valdez. All the passengers were saved, but the Olympia was destroyed.11

In early 1913 Green’s wife, Ida Green, and several other prominent Seward women circulated a petition in favor of women’s suffrage on the territorial level. The first bill passed by the first territorial legislature that same year was a law approving women’s suffrage or the right to vote and to run for office. Women in Alaska had the right to vote in local and territorial elections prior to that right being extended in most of the United States.

On November 26, 1920, in his capacity as a notary public in and for the Territory of Alaska, Green swore in the first city council of Anchorage. By 1924, Green had moved to Anchorage as register of the U.S. Land Office in Anchorage,12 holding that post for ten years until his retirement in about 1934.13 The register was charged with maintaining the office, keeping the land records, taking depositions, etc. According to Green’s entry in the 1930 and 1940 U.S. Censuses, he also served in some capacity as an attorney with the Anchorage Land Office.14

Green and his wife, Ida, built a home at Ninth and M Street in Anchorage, where they took up light farming with their own large garden and a small greenhouse, an activity Green had also pursued in Seward. Green also had a homestead just east of what is now Mountain View, about six miles east of downtown Anchorage.

J. Lindley Green died on July 17, 1941 at the age of eighty-three. He is buried in the Pioneer Tract of the Anchorage Memorial Park Cemetery. His last public outing was to participate in the Anchorage Fourth of July parade in 1941, two weeks before his death, when he rode in the Old Timers section. He was active in the Elks Lodge, which conducted his funeral rites at the Elks Hall, and in the Pioneers of Alaska, Igloo No. 15 in Anchorage. His widow, Ida Green, left Anchorage and moved to Juneau. The Greens had one daughter, Elsie. 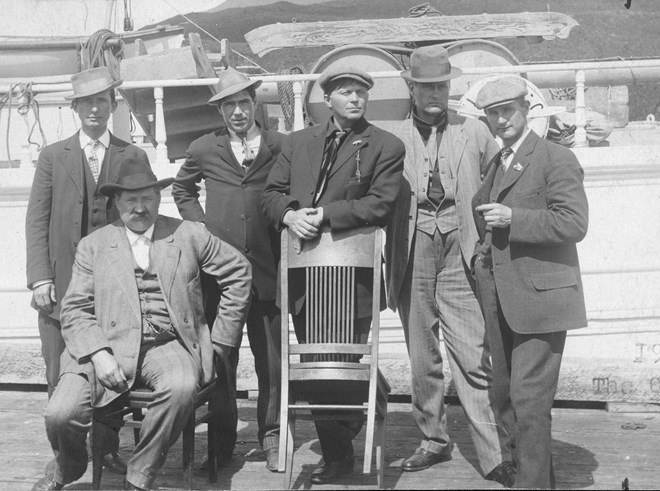 Members of the so-called “floating court” of the U.S. District Court, Third Judicial Division, about 1910. Green is sitting in the front row on the left. As assistant district attorney based in Seward, Green was required to travel by ship to remote villages along southcentral Alaska’s Pacific coast down into the Aleutians.