Mildred Emaculetta Henthorn was born on December 15, 1890 in Denver, Colorado, the first of two daughters of George Alexander Henthorn (1861-1905) and Mary Louise LaPoint Henthorn (1866-1942). Her father was a foreman for Wall & Persel in Denver.2 Mildred lived in Arapahoe County, Colorado in 1900. Little is known of Mildred Henthorn’s early life. Her father, George A. Henthorn, passed away on July 6, 1905, in Norton, Kansas at the age of forty-four.3

By 1907, Henthorn moved to Vancouver, Washington with her widowed mother, Mary Louise, to begin working as a court stenographer for the Clark County District Court. By 1912, she had been promoted to the positions of clerk, secretary, and court reporter and had worked four years in the office of James F. Stapleton, the county’s prosecuting attorney.4

While working in Vancouver from 1907 to 1914, she gained regional and nationwide notoriety in the sensationalist press for being the first woman to serve (temporarily, for a few days) as a judge in Washington State. On November 9, 1911, she conducted a court hearing in a civil suit involving the collection of a nearly $100 debt. Owing to the absence of the justice of the peace, G.L. Davis, the trial would have been postponed, and by stipulation of the two attorneys, Henthorn agreed to act in his stead.5 On November 11, she gave a decision in favor of the plaintiff, C. Fleet, against F.B. Boggs, giving a judgment of $46 and court costs.6 The story was a regional and nationwide sensation and was carried by the Associated Press wires all over the United States. “Woman Sits on Bench in North,” headlined the Oakland Tribune.7 The Washington Standard (Olympia), in “The First Lady to Act in a Judicial Capacity in this State,” commented:

“The STANDARD, which has been an advocate of Women’s enfranchisement, ever since Mrs. Duniway [Abigail Scott Duniway], in her New Northwest espoused the cause nearly a half century ago, felt such a delightful recognition of the progress since made in the full equality of rights granted women in this State, and the gradual breaking down of the barriers imposed by custom, as to be eager to note each successive step of progress as it appeared.

Miss Henthorne [Henthorn] performed the brief duties assigned to her exceptionally well, being especially qualified by several years’ service as clerk in the office of the Prosecuting Attorney of Clarke county.”8

On New Year’s Day, 1912, the Tacoma Times reported that she was a possible appointee as a police judge by the incoming mayor, Charles Irwin. No further news about an appointment appeared in the press.9 In 1914, she left Vancouver and moved to Seattle, where she found work as a stenographer.10

Henthorn came to Alaska in 1916. She arrived in Seward, and then took a dog team to Anchorage since the rail line to Anchorage was not in operation due to the Alaska Railroad’s reconstruction of the Alaska Northern Railroad section.11

Henthorn worked as secretary to the chief accountant of the Alaskan Engineering Commission (AEC) in the Anchorage Accounting Office. The AEC was the federal agency which was in charge of construction of the Alaska Railroad (1915-1923), and which created the Anchorage townsite. According to family lore, she was the third woman hired by the AEC. On February 27, 1917, she resigned her position to open a stenography and secretarial school in Anchorage to train women for work with the AEC.12 When the new school did not have any typewriters available, Mildred made cardboard mock-ups of the typewriter keyboard to teach her students.13 The school was in operation for a short time.14

After Henthorn’s arrival in Anchorage, she met Harry Hamill, a shipping clerk and commercial freight agent for the AEC. On November 16, 1918, she married Hamill in Vancouver, Washington.15 On August 26, 1919, the Hamills’ son, Robert Magee, was born in Seattle, Washington.16

Mildred Hamill was also an artist. Before she came to Alaska she studied life drawing at the Art Museum of Portland, Oregon in 1914. In Anchorage she studied landscape painting with Sydney Laurence in 1924. Sydney Laurence sat for one of her portraits, the only one not done from a photograph. That painting is currently in the collection of the Anchorage Museum at Rasmuson Center.

In 1924, she was put in charge of the amateur art component of the first Western Alaska Fair. Categories included oils and watercolors, with the subjects of animals, landscapes, and still life drawing. Others were parchment shields and shades, pen and ink drawings, pencil drawings, stencil sketches, marine views, “colored photographs, post card pictures, and specimen portraits,” and painted china. Mildred took three first place awards in the 1925 fair. In 1926, she was again in charge of the art component of the event.

In 1924, the Hamill family signed a lease for former A.E.C. Cottage No. 23 (618 Christensen Drive), which had previously been a rental residence for T.S. Oliver, an Anchorage realty owner. In 1930, the house was sold to Harry Hamill.17

With encouragement from her Anchorage friends, particularly Lucy Cuddy, Mildred ventured to the Chicago area, staying with her husband’s mother and sister, and took painting classes at the Art Institute of Chicago in the winter of 1927-1928. In 1936, she sat on a committee composed of prominent townspeople, including druggist Z.J. Loussac and artist Sydney Laurence, to judge whether the town should commission a statue of a sourdough proposed by Magnus “Rusty” Huerlin for the new Anchorage City Hall. She later took private lessons in pastel portraiture from well-known artist Mark Tobey in Seattle, Washington, in 1941.

Hamill participated in an exhibit of Alaska artists at the Henry Gallery at the University of Washington, Seattle, in 1952. She exhibited with the Alaska Art Guild and in 1955 and 1956 at the Anchorage Fur Rendezvous Show.

Hamill held an annual holiday season art exhibit in Anchorage for twenty-four years, beginning in the early 1940s until 1964, showing primarily landscapes. In an August 1965 visit to Anchorage, she did not present her annual art exhibit, but sketched and painted more scenes of Mount McKinley (now Denali). Most of her paintings are held privately by individuals in Alaska and Seattle. She was well-known for children’s portraits. One of her favorite paintings, “Frosty Morning,” a landscape oil painting of Mount Eklutna in pale greens and pinks, received first and second choice at an art exhibit in Anchorage in 1945. It was acquired by the Alaska State Museum in Juneau.18

Hamill participated in the civic and cultural life of Anchorage. She was a member of the Eastern Star, the Anchorage Woman’s Club, the Alaska Art Guild, and the National League of American Pen Women.

Harry McGee Hamill died on August 10, 1958 in Anchorage. After his death, Mildred remained in Anchorage until shortly after the 1964 Alaska Earthquake, when she moved to Seattle. In 1968, after becoming ill, she moved to her son Robert Magee Hamill’s home in Texas, where she died on December 27, 1970.19

Mildred Hamill was cremated and some of her ashes were spread over Mount Susitna or interred with her husband’s remains. Harry and Mildred Hamill are buried in the Elks Tract of the Anchorage Memorial Park Cemetery.20 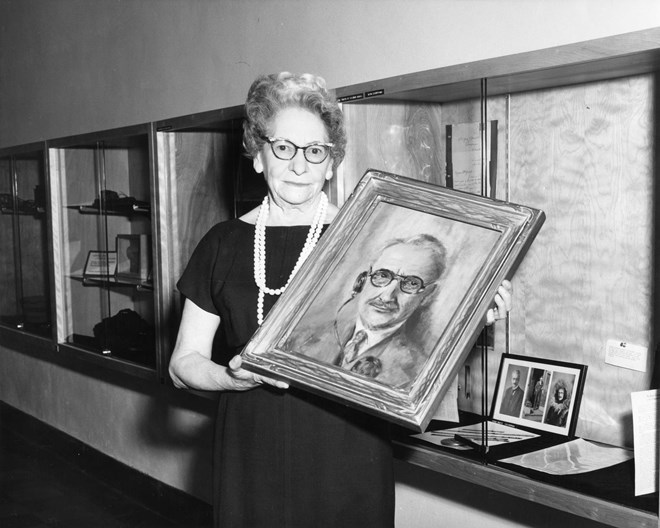 Mildred Hamill holding a portrait of prominent Anchorage artist Sydney Laurence, the only known portrait for which Laurence actually sat. According to Hamill, Laurence asked that she do his portrait and he sat for her every morning for a week. The painting is currently in the collection of the Anchorage Museum at Rasmuson Center.

Harry Hamill, ca. 1945-1950, while he was still working for the First National Bank of Anchorage. 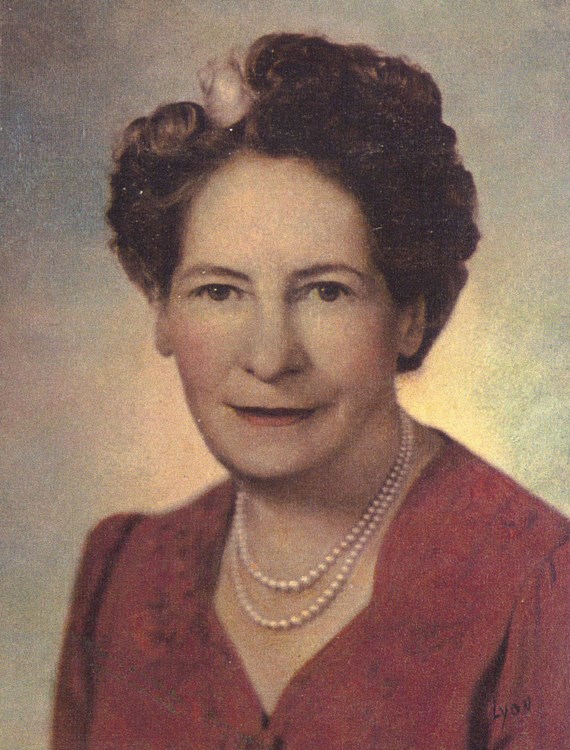 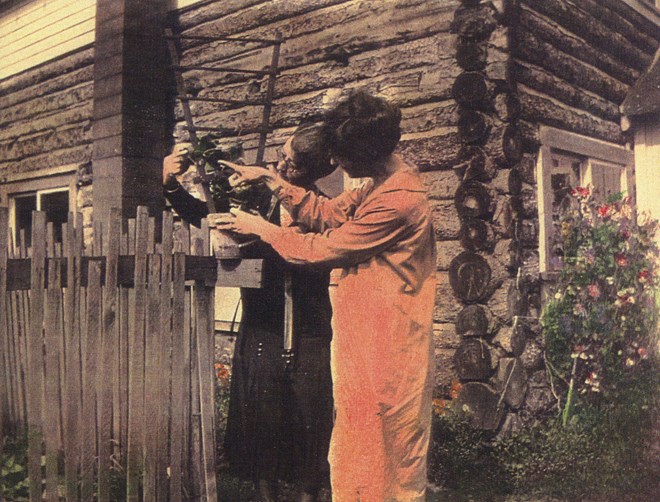 The Hamill’s first house in Anchorage, around 1920, a log structure.