George Kennedy was an Anchorage merchant who operated Kennedy Hardware on the south side of Fourth Avenue (406 Fourth Avenue) in Anchorage, with his older brother, John Kennedy, from the 1930s to about 1945.

George Kennedy’s father, Daniel Kennedy Sr., was a prospector who had worked his way up the west coast of the United States and Canada, finally moving to Sitka in 1876, after failing to strike it rich in Cassiar, in southern British Columbia, during the Cassiar gold rush (1873-1876). The Kennedys were an early pioneer family from Juneau, having arrived in the town within months of the discovery of placer gold deposits in the area.  In 1880, news of the discovery of gold by two prospectors, Richard Harris and Joe Juneau, in the creeks above the Gastineau Channel between the mainland and Douglas Island, north of Stephens Passage, set off a rush of about 2,000 people.1

His Alaskan-born wife, Ekaterina (Katrina or Katherine) Kvasnikoff Kennedy, was the daughter of Feodor Grigorich Kvasnikoff,2who was born near Moscow, Russia. He came to Alaska as a Russian Orthodox clergyman prior to the transfer of Alaska from Russia to the United States. Once in Alaska he married a local woman and moved to the farming community of Ninilchik on the Kenai Peninsula.

George Kennedy was born in Juneau, Alaska on September 19, 1888, the youngest of five sons born to Irish immigrant Daniel O’Connell Kennedy Sr., and Ekaterina Kvasnikoff Kennedy. He spent his boyhood there except for nearly two years in 1902-1904 when the family moved to the Homer area of the Kenai Peninsula to homestead and prospect for coal. According to the 1900 and 1910 U.S. Censuses, he continued living with his family in Juneau at least through 1910.3

Sometime between 1910 and 1917, Kennedy left Juneau and moved to Cordova, Alaska. From 1915 to 1917, he was the deputy collector of customs and immigration inspector for the U.S. Customs Service in Cordova.4 According to his World War I draft registration card, in July 1917, he worked for the U.S. Customs Service, but also claimed an exemption from military service as a federal employee.5 In 1917-1918, he also worked as the manager of Will Clayson’s Cordova store while retaining his federal job.6  In 1918, he entered the U.S. Army as a private in the 47nd Company, 166th Depot Brigade, stationed at Camp Lewis, Washington.7 The purpose of the Depot Brigades was “to receive and organize recruits, provide them with uniforms, equipment and initial military training, and then send them to France to fight on the front lines. The Depot Brigades also received soldiers returning home at the end of the war and completed their out processing and discharges.”8

By 1940, Kennedy had married Thea Josephine Odegaad, age thirty-three, who worked as a typist at Kennedy Hardware as an unpaid family member.11 The couple lived in the McKinley Apartments on 513 Fourth Avenue, in Anchorage.12

George Kennedy remained in Anchorage until 1945.13 He then moved to Seattle, where he and Jack Waterworth (an early Anchorage pilot) had established a hardware store in 1943. Waterworth and Kennedy continued operating their hardware store until its closure in 1951.14 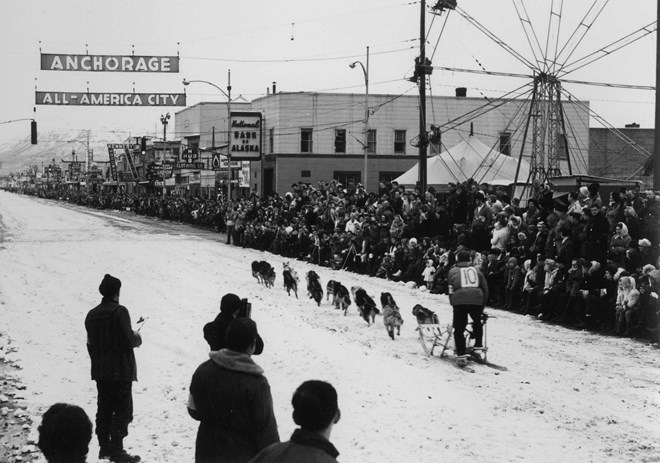 A view down 4th Avenue during the start of one of the dog races during Fur Rendezvous, ca. 1956, when Anchorage received an award as an All-America City and put up the banner that can be seen in this photograph. On the right or southern side of 4th Avenue, a sign for Kennedy Hardware can be seen, although the Kennedy family no longer was associated with the store. 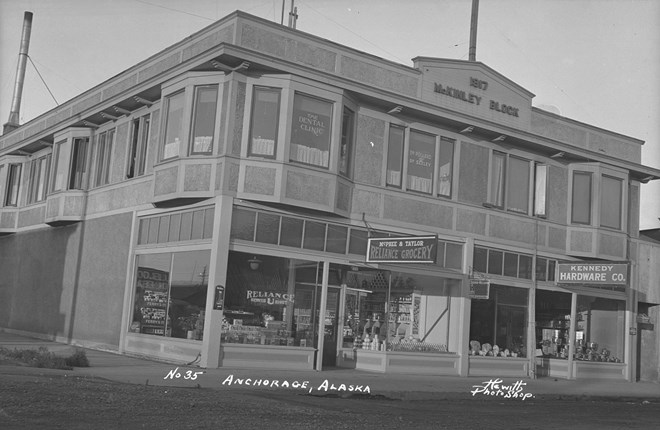 Kennedy Hardware Company on the south side of Fourth Avenue, several buildings east of where George and John’s brother Dan moved Kennedy Clothing after 1934. George Kennedy operated the hardware store with his older brother, John.