James Frances Kennedy was an Anchorage businessman who operated Kennedy Brothers (later Kennedy Clothing Company), a clothing and haberdashery store on the south side of Fourth Avenue, along with his brothers. Kennedy Clothing Company grew to be one of the largest clothing stores in Alaska. In 1934, the clothing store was relocated to 434 Fourth Avenue, several doors down from Kennedy Hardware Company.

James Frances Kennedy's father, Daniel Kennedy Sr., was an Irish immigrant who arrived in the United States sometime between 1843 and 1851.[1] He was a prospector who had worked his way up the west coast of the United States and Canada, finally moving to Sitka, Alaska, in 1876,[2] after failing to strike it rich in Cassiar, in southern British Columbia, during the Cassiar gold rush (1873-1876). Beginning in 1853, Daniel O’Connell Kennedy prospected with indifferent success in California; Kootenai, British Columbia; Oregon; Idaho; and Washington. The Kennedys were an early pioneer family from Juneau, having arrived in the town within months of the discovery of placer gold deposits in the area. In 1880, news of the discovery of gold by two prospectors, Richard Harris and Joe Juneau, in the creeks above the Gastineau Channel between the mainland and Douglas Island, north of Stephens Passage, set off a rush of about 2,000 people.[3]

In 1883, the elder Kennedy became city night watchman and fire warden in Juneau, initially being compensated by a subscription raised voluntarily by the citizens. In 1902, the Kennedys moved to Kachemak Bay to homestead and work coal claims. In late summer 1904, the family returned to Juneau, where Daniel was again hired as night watchman. Kennedy then served the City of Juneau continuously until 1911 when he was retired with half pay. He was familiarly called “Uncle Dan,” and became one of the best known and most beloved of the original pioneers who settled in Juneau.[4]

His Alaskan-born wife, Ekaterina (later referred to as Katrina and Katherine) Kvasnikoff, born on the Kenai Peninsula in Ninilchik, Alaska, on May 17, 1853, was the daughter of Feodor Grigorich Kvasnikoff, a Russian Orthodox missionary who was sent to Alaska prior to the transfer of Alaska from Russian to the United States in 1867. Once in Alaska, Daniel married a local woman and moved to the farming community of Ninilchik on the Kenai Peninsula.[5]

James Frances Kennedy was born in Juneau on January 26, 1883,[6] one of five sons born to Daniel O’Connell Kennedy and Ekaterina Kvasnikoff Kennedy. He grew up in Juneau except for a period when his family moved to Kachemak Bay.

In 1900, when James was seventeen, he was employed as a waiter in Juneau.  In 1905, he worked as a clerk for Charles Goldstein of Juneau and, apparently, was a middleman buying furs from trappers and fur farmers and then reselling them.[7]

On February 14, 1904, James Frances Kennedy married Mary “May” or “Mamie” Vesta Greiser. Their daughter, Frances Louise, was born on August 29, 1905, in Skagway. By 1909, he was working as a clerk for William Clayson, a clothing merchant, at F.H. Clayson and Company, a risk-taking outfitter and dealer in Skagway owned by his brother, Fred. By 1911, James Kennedy was the store manager. He worked in this capacity until he left Skagway sometime in 1918 or 1919.[8]

It appears that three of four Kennedy brothers, Daniel, James, and George, opened Kennedy Brothers, which become the well-known Anchorage clothing and haberdashery firm, in about 1923. From about 1921 to 1923, James may have been the manager of William Clayson’s clothing store in Anchorage.[11] On April 1, 1921, an advertisement in the Anchorage Daily Times for William Clayson’s new clothing store in Anchorage listed him as the manager.

Two years later, an advertisement in the Anchorage Daily Times on June 23, 1923 showed that he and one of his brothers, almost certainly Daniel O’Connell Kennedy Jr., had opened a clothing and haberdashery store in Anchorage under the name of Kennedy Brothers.[12] Daniel and James were associated for years as proprietors of the store, which grew to be one of the largest and most up-to-date in Alaska. In addition to this business, James Kennedy was also associated with his brothers, George and John, in running the Kennedy Hardware store.

James Kennedy was a prominent member of the Anchorage community and was active in civic affairs. In April 1925, he was elected to a three-year term on the Anchorage School Board and by the following year had been appointed as clerk, and reporting on school board matters to the Anchorage city council at their regularly scheduled meetings.[13] He was an outdoor enthusiast, and spent his leisure time at trout streams and hunting ducks.

James Frances Kennedy died in Seattle, Washington, where he had gone for treatment of an illness, on May 2, 1934. His obituary in the May 2, 1934 Anchorage Daily Times read that he was “. . . one of the leading merchants of this city and one of the best known pioneer residents of Alaska.”[14] He was survived by his widow, May Kennedy, and their two daughters: Frances Kennedy Truitt of Seattle, and Kathryn Kennedy, of Anchorage. Other survivors were his three brothers, Daniel O., George, and John Kennedy, and his mother, Katherine Kennedy, all of Anchorage.

After James Kennedy’s death in 1934, his partner and brother, Daniel O’Connell Kennedy Jr., moved their men’s clothing business across Fourth Avenue. The new location was several doors down the street from Kennedy Hardware. Daniel Kennedy Jr. continued to operate the clothing store until it closed in 1942.  After 1934, the name of the business was changed to Hub Clothing.

After her husband’s death, May Kennedy, moved to Palmer, Alaska, where she remarried. She served as the U.S. postmaster for Palmer, Alaska from January 1936 to about April 1941 with the U.S. Post Office Department.[15] She died on January 9, 1978 at the Palmer Pioneer Home. 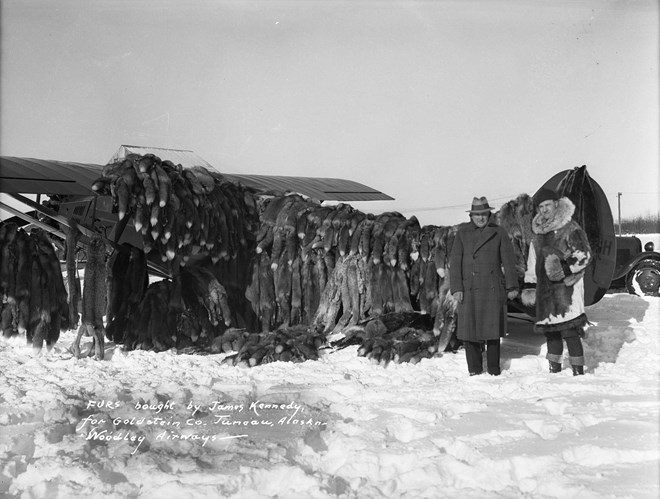 James Kennedy was a middleman buying furs from trappers and fur farms and then selling them, in this case to Goldstein Co. in Juneau. This photograph shows a dapper gentleman who may be James Kennedy with a large number of pelts that cover a Woodley Airways airplane.