Raymond C. “Ray” or “R.C.” Larson was one of Anchorage’s first building suppliers and contractors. He was the owner of Anchorage Lumber & Construction Company, which sold lumber, sash, building materials, mirrors, and other products. Larson was a pioneer lumberman and his business was recognized “as one of the leading commercial enterprises of its kind” in the Territory of Alaska.[1]  He was known as the “lumber king” of Anchorage.[2]

Raymond Chester Larson was born in Merrill, Wisconsin on November 15, 1885, to parents of Norwegian ancestry, Knudt and Louise Chartier Larson.[3]  In Merrill, the elder Larson worked at a lumber mill.  About 1890, the Larson family moved from Wisconsin to Seattle, Washington, when the younger Larson was a child.  According to the 1900 U.S. Census, they lived in Everett, Washington.[4]  After finishing school in Seattle, the younger Larson was hired by the Belknap Glass Company of Seattle, where he worked until his departure for Alaska in 1912.

On January 6, 1909, in Everett, Snohomish County, Washington, Larson married Anna “Ann” Thompson.  She was born in Eau Claire, Wisconsin on November 29, 1883,[5] the daughter of William Thompson and Mary Gormsley Thompson.  In Seattle, they settled into married life and their daughter, Helen, was born there in 1912. However, he had the Alaska adventure in his blood. He participated in the Chisana gold rush (1913) northwest of Cordova, but he was unsuccessful in his mining adventure and returned to Seattle.

In 1915, Larson headed north again, spurred by the public announcement on April 10, 1915, of the construction of the Alaska Railroad and that the Ship Creek area would be the field headquarters for the project. Larson pulled together a large stock of lumber, builders’ hardware, glass, paints, and other building materials and hurried north. According to newspaper reports, his lumber business was one of the first business firms that opened at the new townsite of more than two thousand persons on upper Cook Inlet.  He also worked as a glazier, and was called “the glass man.”[6]  In 1916, Larson brought his family to Anchorage.

Larson, with his partner, Harold L. Bliss, founded the Anchorage Lumber & Construction Company, located at 936 Fifth Avenue.  The lumber yard was located nearby on Fifth and E Street. Larson and Bliss built many of the homes that stood in the city.[7]

In Michael Carberry’s and Donna Lane’s Patterns of the Past: An Inventory of Anchorage’s Historic Resources (1986), there are two examples of homes for which he was the supplier or contractor. There is his own home, called “the Larson House” (600 West Second Avenue), for which he personally oversaw the construction. The other example is the Seeley House, which was originally located at Second and Christensen Road[8] (or 200 Christiansen Road).  The Seeley House was later owned by Anchorage dentist Lawlor J. Seeley, Larson’s son-in-law.  This street address was later renamed as 700 West Second Avenue.[9]

Larson’s activities were not limited to the lumber business, and he had interests in several other enterprises.  A glass cutter by trade, Larson also specialized in glasswork, and operated the Anchorage Supply Company for a number of years.  According to an advertisement in the March 11, 1924 Anchorage Daily News, his business carried “the largest stock of Plate and Window Glass in Alaska,” including “MIRRORS OF ALL KINDS.”[10]  He also “had interests in other business enterprises” including “a cannery at Bristol Bay,” where he “made airplane trips there each summer.”[11]

Larson took an interest in the growth of Anchorage.  After the first organizational meeting of the Anchorage volunteer fire department was held on June 9, 1916, he was unanimously elected as fire chief.[12]  He also expressed his athletic ability by helping to organize the first baseball team in Anchorage and was one of its valuable players. He was a popular member of duck hunting expeditions on Cook Inlet and was well known for good humor and storytelling at social gatherings.[13]

Larson was also an avid fisherman.  In 1931, after three Fairbanks residents broke his local fishing record, the Fairbanks Daily News-Miner reported: “He says he will be back here next year and give our local boys something to shoot at when it comes to catching fish, even if he has to bring a man-eating shark with him from Australia.”  The paper also quipped that Larson and his party had planned to leave on “tomorrow’s train for their home town—the best little town in Alaska next to Fairbanks.”[14]

In the summer of 1940, Larson sold his interest in the Anchorage Lumber & Construction Company to his partner, Harold L. Bliss.[16] Larson retired from active business due to poor health.

Raymond Chester Larson died in Portland, Oregon, on March 9, 1941, as the result of a lingering illness.  His widow, Anna “Ann” Thompson Larson, died on March 14, 1974, in Seattle.  They were both buried in the Catholic Tract (Lot 9, Section 8) of Calvary Cemetery, in Seattle.  They were survived by their only daughter, Helen Larson Seeley (1912-1987). 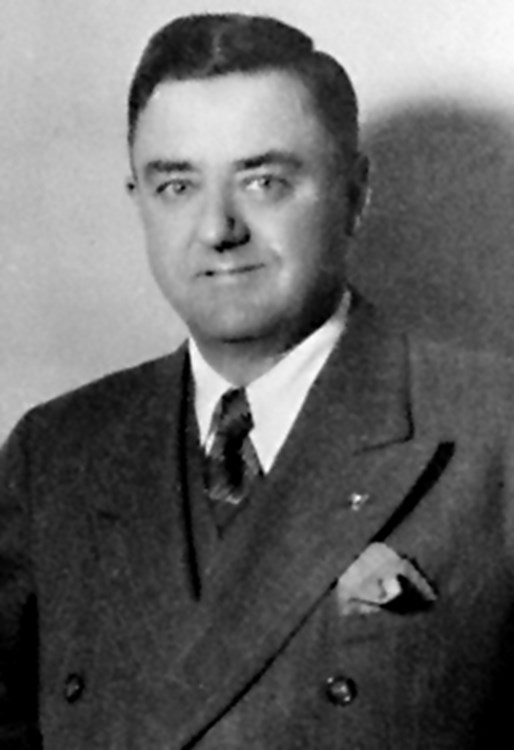 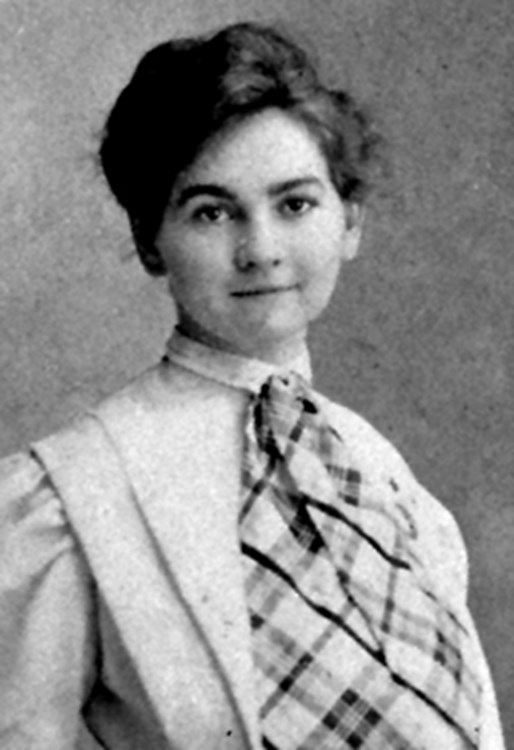 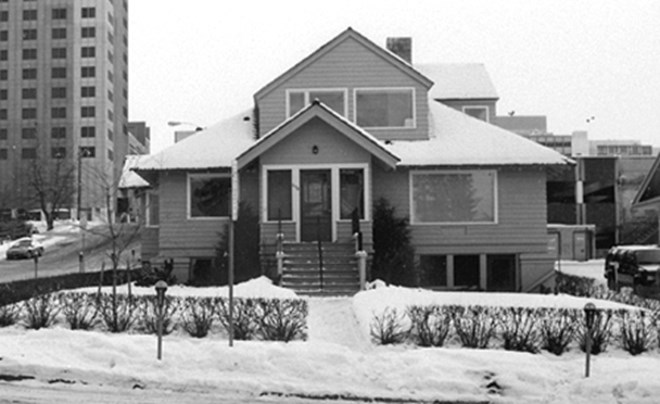 The Larson home at 2nd Avenue and F Street. It has been remodeled from the original construction. 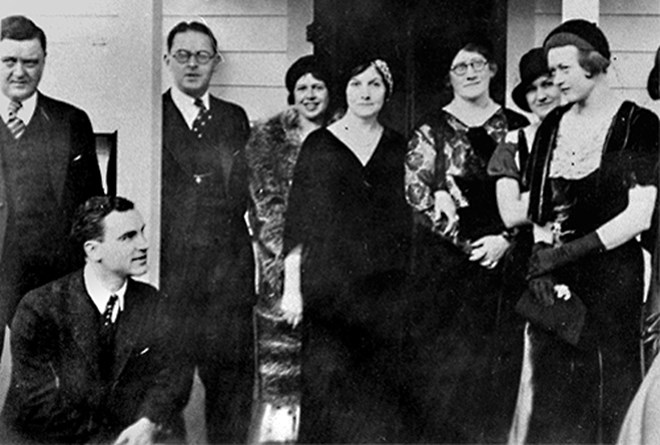 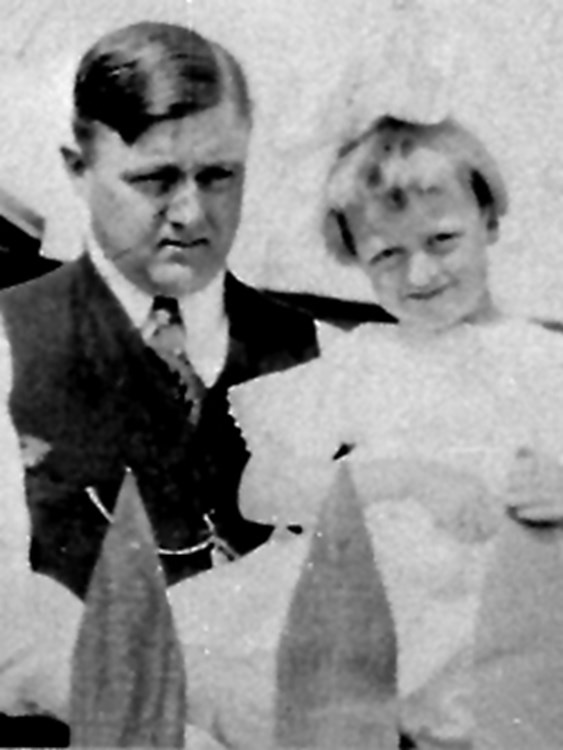 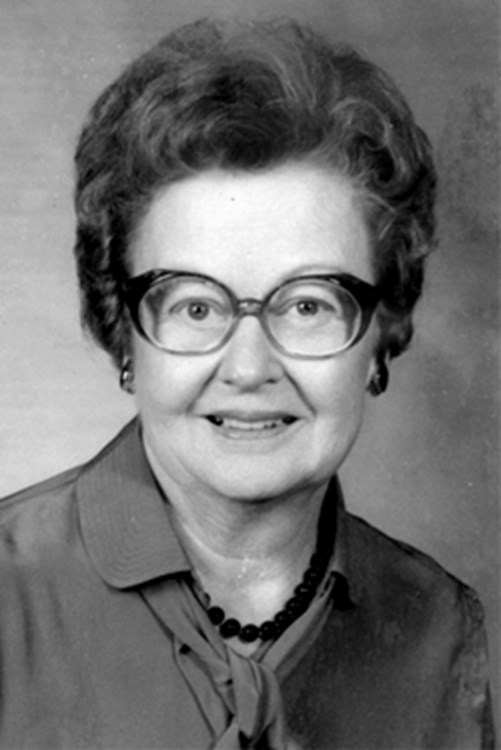 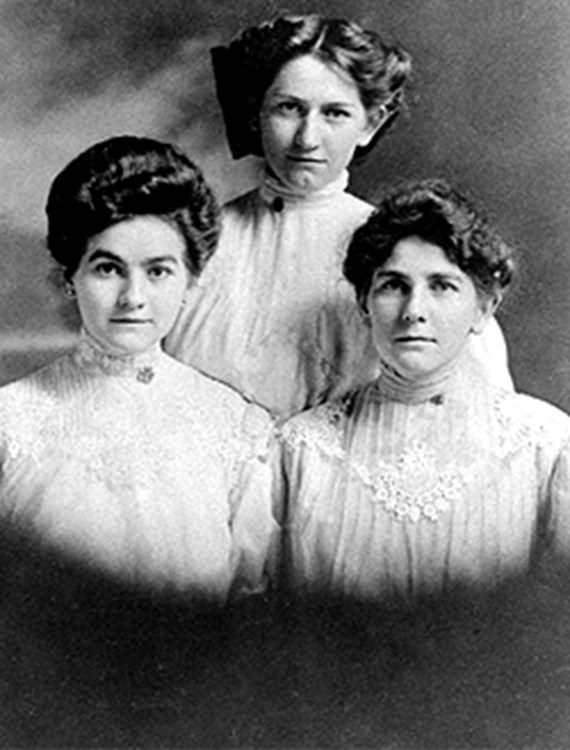 The Thompson girls: Ann, left, and her sisters. Ceil is at center; Isabel at right.

[9] Michael Carberry and Donna Lane, Patterns of the Past:  An Inventory of Anchorage’ s Historic Resources (Anchorage:  Community Planning Department, Municipality of Anchorage, 1986):  20.

[16] In 1941, Bliss sold Anchorage Lumber & Construction Company to the Columbia Lumber Company and then opened his own cabinet shop.  “Ray Larson Passes Away,” Anchorage Daily Times, March 10, 1941, 1 and 8.