Architect William A. Manley designed some of Anchorage’s most significant commercial buildings starting in the late 1930s.  In partnership with Francis B. Mayer, their firm, Manley and Mayer, Architects, designed many of Anchorage’s schools. They also designed several buildings on the Alaska Pacific University and the University of Alaska Fairbanks campuses.

Manley moved to Juneau in 1913 with his father, who was skipper of a freezer ship.[2] He graduated from Douglas High School, in Douglas, Alaska, in 1922.  Manley studied architecture at the University of Idaho at Moscow from 1923 to 1927, but did not obtain a degree.[3] In 1930, he married Margaret H. Hall in Skagit, Chelan County, Washington.[4]

His professional career began as a draftsman where, from 1927 to 1933, he found work with three practicing architects in Idaho, Washington, and Alaska.  In Moscow, Idaho, he worked for David C. Lange from 1927 to 1928. He then moved to Wenatchee, Washington, where he was employed by L. Solberg from 1928 to 1931.  When he returned to Juneau in 1931, he began a working relationship with N. Lester Troast, of N. Lester Troast & Associates, Juneau, Alaska, first as a draftsman, from 1931 to 1933, and then as an associate architect from 1933 to 1938.

In 1937, Manley moved to Anchorage to establish an office for N. Lester Troast & Associates, architects of Juneau and Anchorage, with Manley in charge.  The Anchorage office was opened to handle all company business along the Alaska Railroad belt and in western Alaska.[5]  In 1938, Manley and Troast designed the first three-story bunkhouse at Independence Mine, located in the Talkeetna Mountains, and now operated as a state park.[6]  Manley also designed buildings in 1938 in Kodiak, Ouzinkie, Seldovia, and Wasilla.[7]

In 1938, he began his own architectural practice, William A. Manley, Architects, with an office located at 419 E Street in downtown Anchorage.  In 1939, he became registered as an architect, without examination, by the Alaska Board of Engineers and Architectural Examiners.[8]  Manley’s contributions to Anchorage architecture are particularly noteworthy as he was one of the few architects in the city prior to World War II.[9]

Manley designed the Anchorage Central Grade School at Third and G in 1938, but it was demolished in 1982.[10]  In 1940, he designed a group of twenty houses for soldiers at Elmendorf Field.  Located on two blocks between Tenth and Eleventh Avenues and A and C Streets, the housing project was called “probably the largest construction program for homes ever undertaken since the city was established.”[11]  Eventually, more than fifty houses were built in the area and in the block adjoining it to the west.

In addition, during his first two and a half years in Anchorage, Manley designed over fifty homes.  In 1940, he commented that the cost of building a home in Anchorage was sixty percent higher than the cost in Washington State.[12]

In July 1944, the Anchorage City Council approved Manley as the architect to complete plans and specifications to erect a new addition to the Anchorage High School.  The reinforced concrete addition contained nine classrooms, a gymnasium with a seating capacity of 1,100, and a school cafeteria.  The gymnasium had received full support from local residents in 1937, but was deleted from the plans in favor of an auditorium. The $274,000 contract was given to the J.S. Warrack Company of Seattle, Washington.  On February 11, 1946, the gymnasium opened, and Anchorage defeated Fairbanks 25 to 24 in an overtime basketball game.  The nine additional classrooms which housed the junior high school were completed in 1946, and were occupied over the Fur Rendezvous holiday.[13]

Manley was the architect for the Anchorage Health Center, which was located on the corner of Second Avenue and E Street, and completed in 1944.  The building, which measured 40 feet by 66 feet, was a three-story A frame structure with a flat roof, and an exterior finish of asbestos shingles.  The plans for the structure provided for the Alaska Territorial Department of Health branch laboratory and two hospitalization wards for communicable disease cases, complete with kitchen facilities, on the first or basement floor.  A small adjoining room housed animals that were used for laboratory experiments.  On the main floor, there were offices for public health nurses, with three consulting and examination rooms, and a waiting room.  A lecture room was part of the health center along with an x-ray unit for use in the tuberculosis control program.  The upper floor contained offices for territorial and city health officials and the territorial sanitarium.  The Health Center was built with a $49,000 grant in Federal Works Agency funds, with the J.B. Warrack Company of Seattle, Washington, as contractor.[14]

Manley designed the reinforced concrete Art Moderne Loussac-Sogn Building (1946-1947) on the northeast corner of Fifth and D Street in downtown Anchorage.  The building’s original owners, Z.J. Loussac and Dr. Harold Sogn, directed Manley to design a simple, one-story medical clinic for Sogn, but office space was added to the design.  When the Loussac-Sogn Building opened, it was the city’s largest commercial office building, at three stories in height.

In 1941, the Loussac Building, an apartment and office building, was constructed.  Judging by the similarities to the adjoining Loussac-Sogn Building (411 D Street), Manley may have also designed it.[15]

Manley was called “an accomplished designer” in the Art Moderne style, popular in America in the 1930s and 1940s.  The Art Moderne style reached Alaska slightly later.  This style characterizes many of downtown Anchorage’s older buildings.[16]  The characteristics of the Art Moderne style are well illustrated in the Loussac-Sogn Building.  The design elements of the Art Moderne are especially prominent in the long horizontal lines, right angles, and flat surfaces that create a low, horizontal profile.  Dark green ceramic tile began at the sidewalk and rose three feet, one-inch to the shop window sills, forming a strong visual base.  The horizontal design emphasis, smooth wall surfaces without applied decoration, parapet walls, horizontal window bands, and ceramic tile coping at the roof line, flat roof, and asymmetrical façade are many of the elements included in the building.[17]  The earliest surviving example of the Art Moderne style in Anchorage is the Old Federal Building and U.S. Courthouse (605 West Fourth Avenue), designed by Gilbert Stanley Underwood, a Los Angeles-based architect, in 1939-1940.

Manley partnered with Ned and Wanda Gelles Griffin and land developer Lloyd Himes to build the Knik Arms Apartments on the Gelles family land.  The apartments were completed in 1950 and the fifty-nine unit complex was managed by the Griffins until 1968, when they were sold and, subsequently, converted into condominiums.[18]

In 1947, Manley formed a flourishing partnership with Francis B. Mayer (1914-1985), Manley and Mayer, Architects. Manley was a partner with Mayer until 1972.  Their office was located in the Loussac-Sogn Building.  In the postwar period, Manley continued to use his skills in the construction of the community during an era of incredible growth for Anchorage. Between 1940 and 1950, the city’s population grew from 4,200 to 11,254 people.[19]

In August 1953, the firm received a commission from the City of Anchorage to build the original Z.J. Loussac Public Library, which was located at Fifth and F Street in downtown Anchorage.  Income from the Loussac Foundation built this one-story, reinforced concrete building, which was occupied from 1954 to 1985, before being replaced by a much larger, diversified, multi-story structure in midtown Anchorage, but retaining the original name, Z.J. Loussac Library.  Francis Mayer presented preliminary drawings for a new Anchorage City Hall at the August 28, 1955 meeting of the city council, which were approved with the intent of sending them to Juneau in search of capital construction funds.[20]

Manley designed a number of other notable buildings in Anchorage. Among them are Grant Hall at Alaska Pacific University, West High School, Ursa Major and Minor Elementary Schools, the Simpson and Commerce Building, and the Armed Forces YMCA.  As associate architect, Manley participated in the design for Alaska Pacific University’s student union (renamed the Atwood Center in 1983) and a residence hall, with Edward Durrell Stone of New York selected as the primary architect for these buildings.  In 1960, Manley and Mayer designed Gould Hall, a dormitory, on the APU campus.[21]  In Juneau, Manley designed the façade and first floor addition to the Governor’s Mansion, which is listed in the National Register of Historic Places, and the Shrine of St. Therese near Juneau.[22]

In 1961, Manley and Mayer, Architects, designed an addition and remodel of the Anchorage International Airport.[23]  In 1970, on the north side of the quadrangle in the heart of the University of Alaska campus at Fairbanks, they designed the Elmer E. Rasmuson Library and the smaller, adjoining Fine Arts Complex.[24]  Across the quadrangle, the firm designed the four-story, multi-purpose Charles E. Bunnell Building in 1959. The Bunnell Building featured a “curtain wall of enameled panels and glass" that terminated in concrete bays at both ends of the building.[25]  In the 1960s, the Bunnell Building became the new campus hub, housing the university administration, library, an auditorium, classrooms, laboratories, and several academic departments.[26]

Manley’s partner, Francis B. Mayer, designed many of Anchorage’s schools.  According to Mayer’s 1985 Anchorage Daily Times obituary, as a partner in Manley and Mayer, Architects, it states that he “designed West Anchorage, Service and Dimond high schools, Anchorage International Airport, the Central Building, and many other city buildings.”[27]

Alaska Board of Engineers and Architects Examiners

Before Manley’s retirement in 1975, he served on the Alaska Board of Engineers and Architects Examiners. The Board was responsible for reviewing and approving the registration of architects holding licenses from other states on a reciprocal basis.[28]  The Board provided advice on architectural standards and practices. In 1945, the Board adopted a resolution urging the modernization or adoption of uniform building codes and suitable ordinances (to promote fire prevention and control, health, safety, and general welfare).  The resolution was sent, with a model building code, to local government units throughout the Territory.[29]

After the closure of Manley and Mayer, Architects, in 1972, Manley moved to Silverdale, Washington.  He re-established his architectural firm, William A. Manley, Architect, and then worked until his retirement in 1975.[30]

The author would like to thank Nancy Hadley, Archivist, American Institute of Architects Archives, New York, N.Y., for her research assistance in locating the membership files for William A. Manley, Francis Mayer, and N. Lester Troast. These files contained substantial information on their architectural careers that was not available in other sources. 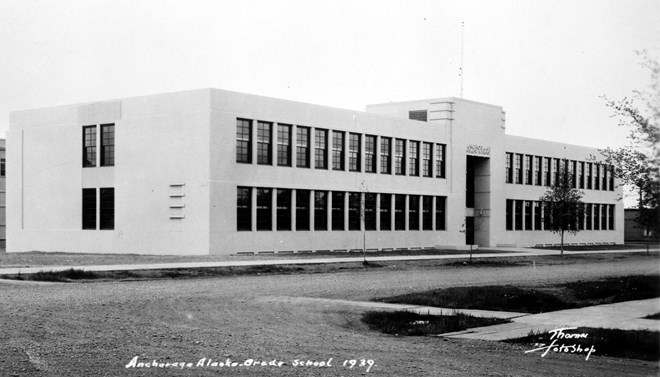 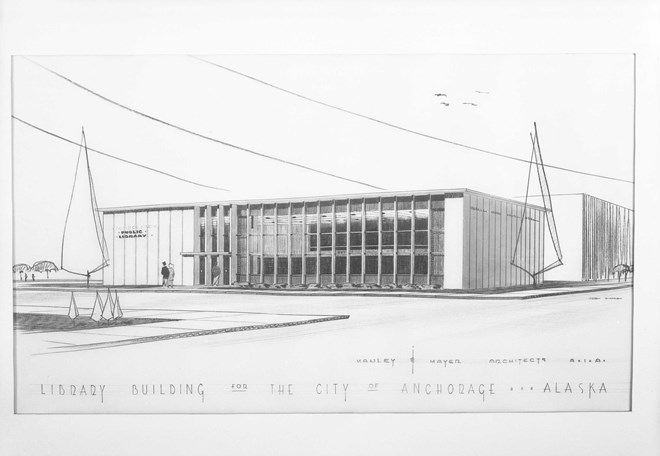 Architectural drawing of the original Z.J. Loussac Library, 1953 (opened in 1955), by Manley and Mayer, Architects, Anchorage. 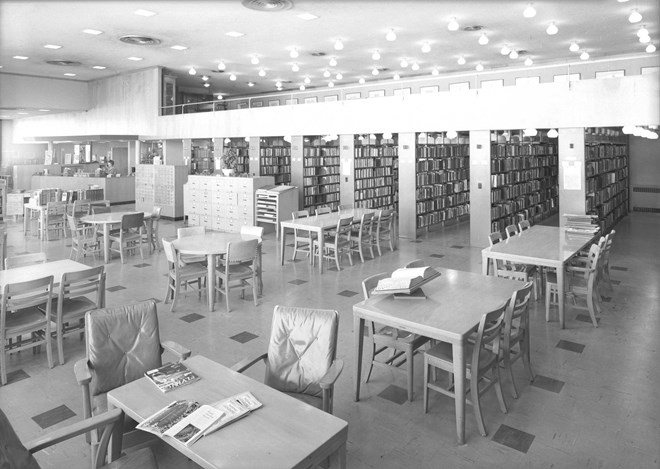 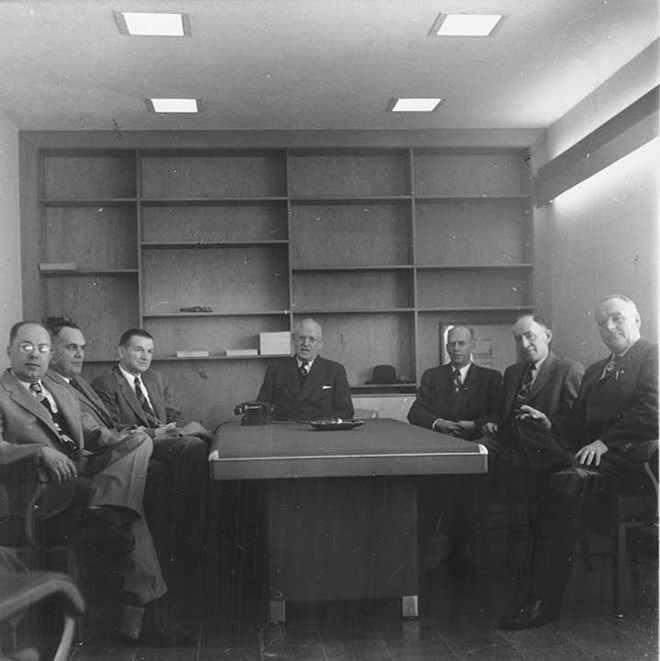 Alaska Territorial Board of Engineers and Architects Examiners, February, 1955, Fairbanks. Manley is third from the left. 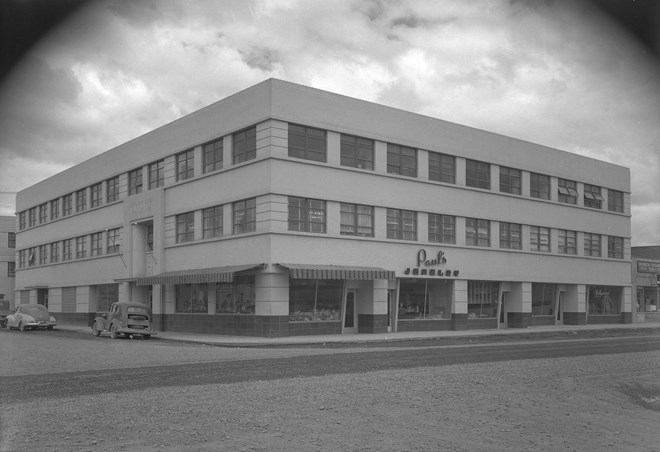 The Loussac-Sogn building (411 D Street), built with retail space on the ground floor and space for professional offices and apartments on the second and third floors. 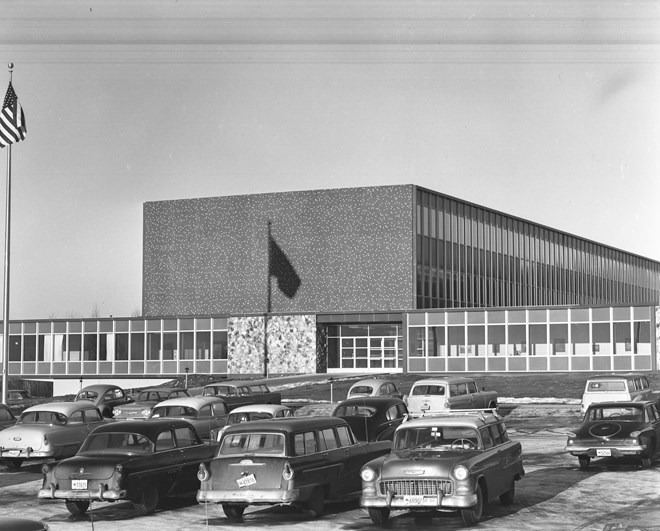 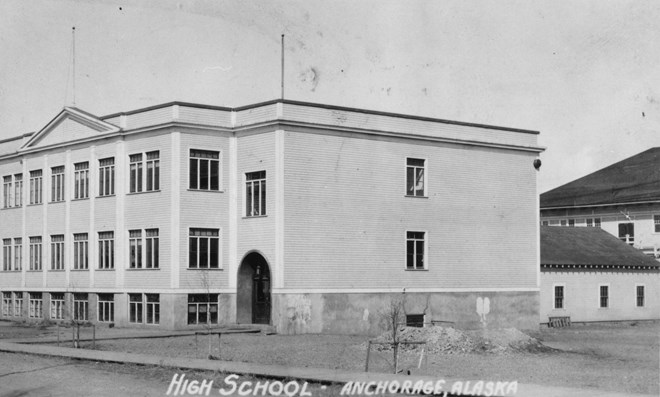 [26] Terrence Cole, The Cornerstone on College Hill: An Illustrated History of the University of Alaska Fairbanks, 156.