William G. Marsh Sr., was a prominent early homesteader in the Anchorage area. The Marsh family met with great success in farming their homestead, Aberdeen Ranch. In 1925, their farm claimed to have produced an average of 11.76 tons of potatoes to the acre, the biggest known world production record at that time.

The six-hundred acre Aberdeen Ranch, also known as the Marsh Homestead, covered an arc that included the east end of the Elmendorf Airfield and the land to the north, where many of the base structures were built. In 1941, the Marsh homestead was bought by the federal government when the U.S. Army established what is now Joint Base Elmendorf-Richardson.

William Gillies Marsh Sr. was born on June 21, 1866, in Lawton, Michigan, the third of six children of James G. and Henrietta Gillies Marsh.  On December 2, 1862, his father enlisted during the Civil War as a private in the Michigan Volunteers' 9th Cavalry Regiment.  He was mustered out as a full corporal on July 21, 1865 at Lexington, North Carolina.1 The elder Marsh was a carpenter, a trade that his son William probably learned at home.

On March 26, 1887, Marsh married Mariola Elvira Heigh2 or High3 in Grayling, Michigan. She was born June 6, 1869, in Brockway, Michigan. They lived in West Branch, Ogemaw County, Michigan, where William worked as a carpenter. William and Mariola lived in northern Michigan until 1910,4 when they moved to The Dalles in Oregon. In 1914, they relocated to Aberdeen, Washington.5 They had a large, extended family of eight children, four sons (Arthur, Donald, Harvey, William Jr.) and four daughters (Edna, Enid, Ellen or “Nellie,” and Irma).

Marsh came to Alaska in 1915, where he worked on a construction crew building the Pioneer Cannery in Cordova.  He came to Anchorage the following year with his son, Arthur, doing advance survey work on the Alaska Railroad for the next three years.

Marsh arrived in Anchorage as a first class passenger on the steamer Admiral Watson in September 1919.6 By October 31, 1919, he had filed his homestead application for land near the “Loop Road,” located five miles outside of Anchorage, in an area that would become Elmendorf Air Force Base.

Under the Homestead Act of 1862, the federal government made free land in the western states or territories available to homesteaders willing to live on the land for five years, develop the land for agriculture, and build a suitable residence on the land. The law allowed anyone over the age of twenty-one, the head of a family, or a U.S. citizen (or having the intention of becoming a citizen) to homestead 160 acres or less of land in the public domain that was suitable for farming. After five years, if these requirements were met, the homesteader was given a patent or full ownership, to their parcel.7

The Homestead Act of Alaska of 1898 (30 Stat. 409) was passed by Congress to make it easier to encourage settlement and to develop the territory. The law allowed for up to 320-acre homesteads but, in 1916, the maximum homestead size was reduced to 160 acres. In 1912, the law was amended to reduce the time necessary to receive a patent from five to three years, which was applied nationally. The law also stated that after the third year, one-eighth of the land had to be under cultivation and a suitable residence built. There was a diminished residency requirement to live on the land continuously for at least fourteen months. Another option was for the homesteader to purchase the land by paying $1.25 per acre.8

Between 1914 and 1939, forty individuals filed homestead applications on parcels of land that would later become part of Elmendorf Air Force Base or be reserved for military use. Another eighteen individuals, who bought land parcels from the original homesteaders, also were associated with the federal government’s purchases of land. These land purchases began in 1927 and continued until 1942, when all of the land needed for military use had been bought.9

Two years later, in July 1921, Marsh’s wife, Mariola, and the remaining members of her family arrived in Anchorage. Their arrival produced this laudatory account, titled “The Marsh Family Will Locate Near Anchorage,” in the Anchorage Daily Times, July 21, 1921:

"A family that has faith in the future of the Anchorage Country is the W.G. Marsh family of twenty who have taken up homesteads 4 miles northeast of this city. The father, W.G. Marsh, three married sons, and two sons-in-law have filed or will file on adjoining homesteads. Eleven of the family—Mrs. W.G. Marsh, three children, a girl of sixteen, a boy of twelve and a girl of eight, together with a son, Arthur Marsh and wife, and son Harvey and wife and three children—arrived in Anchorage on the last Alameda. There are now six hundred acres on their combined farms, which they have named the Aberdeen Ranch, from the town, Aberdeen, Washington, where they formerly lived. They have a small sawmill on the place and have cut all the lumber for their buildings. They will also raise grain for market, and now have enough for their own use. They shipped in from the states several hundred chickens and a cow which arrived on the freighter 'Juneau.'"10

The Marsh children attended school in Anchorage, five miles away by wagon or sleigh. The family’s original cabin had two rooms and originally just dirt floors and no indoor plumbing. They heated the building with a cook stove.

The Marsh family became very successful in farming their homestead, as noted in references to the Marshes or individual family members that appeared in the Anchorage Daily Times from 1924 through 1927. For instance, the family was particularly successful in raising potatoes. On October 14, 1925, the Times indicated that the Marshes were averaging 11.76 tons of potatoes per acre planted. The pioneering farming effort of the Marshes is described:

"The Aberdeen Ranch, known as the Marsh Homestead, represents a serious effort to develop scientific farming and the results thus far obtained give some notion of what can be accomplished. W.G. Marsh, Sr., turned the place over to his son, Arthur H., this year, and he is highly elated over the success which has attained his first year’s efforts, with no previous experience, except for the assistance given by his father, who also is a novice, never having farmed before coming to Alaska."11

In 1924, William G. Marsh Sr. turned over management of Aberdeen Ranch to his son, Arthur. That same year he was chosen to speak at the closing ceremonies of the first Western Alaska Fair to represent the local homesteaders. In August 1925, the elder Marsh moved to a residence in Anchorage (721 Seventh Street).

The Marshes were noted for their “blue ribbons” or first place entries in the Western Alaska Fair in Anchorage. The first fair was held in 1924 over the Labor Day weekend and organized by the Anchorage Chamber of Commerce and the Anchorage Woman’s Club. Marsh and his sons won a blue ribbon in two categories for their chickens and a second prize for one of their pigs. Mariola Marsh was awarded first prize for her vegetables. The large studio and outbuildings that Austin E. (“Cap”) Lathrop had built at the end of Third Avenue for the filming of The Cheechakos (1924) was used as the site for the fair.12

The extended Marsh family was still involved with farming. In 1925 the family had cleared eighty acres of land and another thirty acres were seeded for pasture with the stumps still in place. It was estimated that an acre of land cost one hundred dollars to clear. “W.G. Marsh and Sons” won awards for their potatoes, table beets, radishes, chickens and pigs in the 1925 Western Alaska Fair.13 The Anchorage Times displayed five of their potatoes on display at their office, commenting:

"Five of them [potatoes], placed end to end, measure approximately a yard. They are solid, fully matured and of fine appearance, as good as any potatoes grown anywhere in the world and average larger than most of them. But that is not half the story. The Aberdeen Ranch is thought to have set a world record for production, as the following figures will show: On a lot of ground 34 square rods in extent there was harvested 5,000 pounds of merchantable potatoes, which is equivalent to 11.76 tons to the acre, or 392.15 bushels."14

While still involved with the Aberdeen Ranch, Marsh was active as a carpenter in the Anchorage and Palmer area. By 1928 he was in charge of building operations at the federal Alaska Agricultural Experiment Station at Matanuska, completing a farm dormitory and mess hall.

On March 26, 1937, William and Mariola Marsh celebrated their fiftieth wedding anniversary. The Anchorage Daily Times stated it was: “. . . one of the largest family gatherings ever held in Anchorage.”16 Marsh then sold his 160-acre homestead to his daughter-in-law, Virginia Marsh.

On August 8, 1937, at the age of 71, William G. Marsh Sr., died of complications of appendicitis.17 He was a member of the Masons for forty-eight years, and served as an officer.  Mariola Marsh died five years later, on July 26, 1952, after a “lingering illness.”18 She was active in the Order of the Eastern Star and the Pioneers of Alaska, Auxiliary No. 4, in Anchorage. The couple is buried in the Anchorage Memorial Park Cemetery. 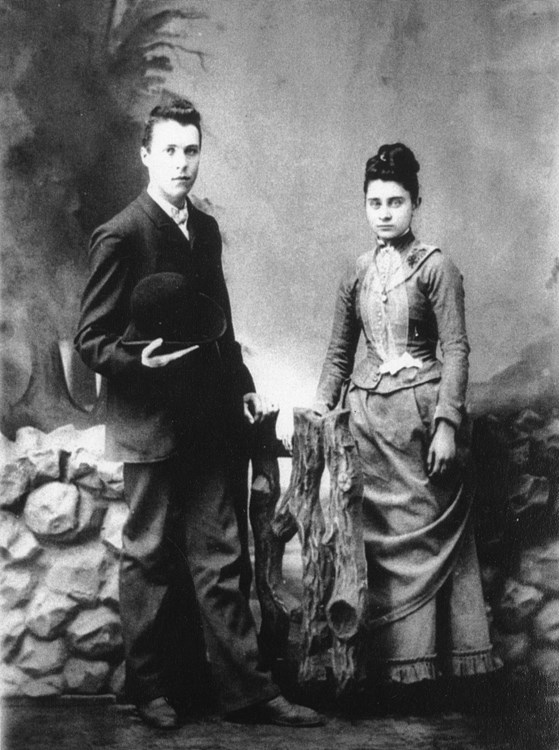 William Gillies Marsh Sr. and Mariola Elvira High at about the time of their marriage on March 26, 1887 in Grayling, Michigan. 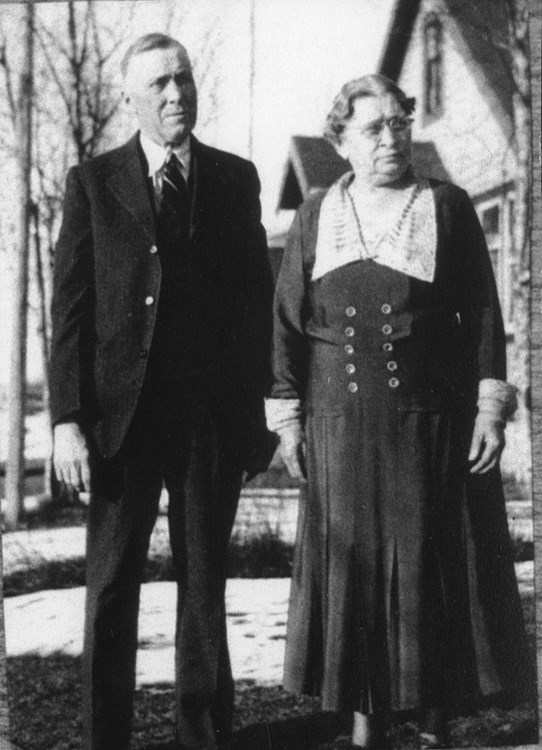 William G. and Mariola H. Marsh near the time of their 50th wedding anniversary in 1937. 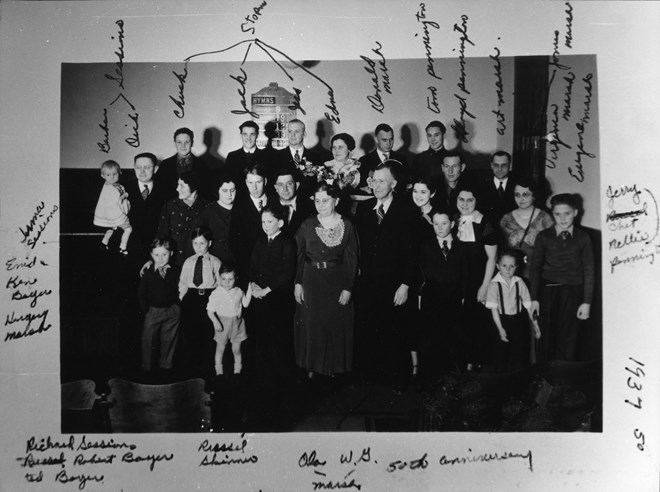 Seven of the eight Marsh children were living in the Anchorage area when William and Mariola had their 50th wedding celebration there on March 26, 1937. This photograph was taken of the extended family at that time.