Jennifer “Jane” Wainwright (also known as "Jennie," or "Johnnie"), better known as Jane Mears, was born at Fort Walla Walla, Washington, on St. Valentine’s Day, February 14, 1880, to Robert Powell Page Wainwright and Josephine Serrell Wainwright. Throughout her life she preferred to be called Jane, after her grandmother, Jane Pound.

Jane Wainwright was married to Frederick Mears, who served in the U.S. Army from 1899 to 1923, and retired as a colonel. Jane Wainwright Mears and her husband, Frederick Mears, were significant figures in the early history of Anchorage due to her husband’s role with the Alaskan Engineering Commission (AEC) and as builder of the Alaska Railroad and her prominence in early civic and community affairs. During the time the Mears family lived in Anchorage, 1915-1923, the AEC built the first two schools in Anchorage in 1915 and 1917. As a result, public bonding was not required to finance school construction until 1928.1

Jane Wainwright was part of a family with a strong military tradition. Her father, Major Robert Page Wainwright (1852-1902), was a U.S. Army officer and West Point graduate, class of 1875. He fought Indians on the western frontier and commanded a cavalry squadron in the Battle of Santiago in the Spanish-American War. He died while on active duty, November 19, 1902, in the Philippine Insurrection.2 Her brother, Jonathan Mayhew Wainwright IV, the commanding general of Filipino and U.S. Army forces in the Philippines (1941-1942), led delaying tactics on Bataan and Corregidor during World War II against superior Japanese forces. The military base at Fairbanks, Alaska was named in his honor.

Jane Wainwright studied music and voice at the Chicago Conservatory of Music and planned an operatic career.3

Jane Wainwright met her future husband, Frederick Mears, while he was stationed as an Army Lieutenant at the Army Staff College, Fort Leavenworth, Kansas. In 1907, Jane Wainwright married Army Lieutenant Frederick Mears at Fort Clark, Texas. She accompanied her husband to Panama, where he spent the next eight years building the Panama Railroad and coping with a multitude of problems involving the building of the Panama Canal. They lived in Cristobal, Panama, near Colon. In Panama, their baby daughters were born, Josephine "Jo" in 1908 and Elizabeth "Betty" in 1910. In April 1914, President Woodrow Wilson appointed Mears to the Alaskan Engineering Commission.4

Jane Wainwright Mears arrived in Ship Creek in early May 1915 with her two daughters, Jo and Betty. While they awaited completion of a cottage, the family occupied a plank-floor tent of their own, cooked over a wood stove, and burned kerosene for light. Their house, AEC Cottage No. 6, was built on Government Hill atop a bluff to the north of the terminal yards.5  In January 1917, the Mears family moved out of AEC Cottage No. 6, bundling themselves together in the family sleigh, with their household items. They moved to AEC Cottage No. 29, a two-story residence overlooking Cook Inlet, across the flats of Ship Creek and up C Street toward West Second Avenue. It was located among a group of homes (“Railroad Row”) built for members of the AEC management team. AEC House No. 29 had been built to Mears’ specifications in 1916, and remained the family home until they left Alaska.

Jane Mears took wholeheartedly to the Alaskan lifestyle. She accompanied her husband, who was at ease in the out-of-doors, on wilderness outings and held her own in marksmanship. Her family enjoyed sharing the wilderness with visitors and official dignitaries, often taking them hunting, fishing, and camping. For those who had never been to Alaska, it was the experience of a lifetime.6

Through her husband, Jane Mears helped convince the federal government a school should be built with federal funds. Since Anchorage was a federal government boomtown, the AEC had to accept the responsibility for public education. In 1915, the AEC designed and built the school, now known as the Pioneer School House. Federal funds were allocated under the Alaska Railroad Act for construction of a two-story building, located on Fifth Avenue between F and G Streets.7

Jane Mears was the “prime factor” in organizing the Anchorage Woman’s Club (AWC), and served as the first president from 1915 to 1917.8 Meeting at the home of Jane Mears, the AWC was organized on September 16, 1915, by a group of thirty-four women who recognized the need to establish a public school. With school age children of her own, Mears understood the plight of the school board, which had no funds to educate the children who continued to arrive with the spouses of the workers. The AWC had an interest in Education, Home Economics, Art, and Literature, and represented the direction that was taken in club work. Also formed was the first Parent-Teacher’s Association.9

The dilemma of providing for a public school took months to solve. In the summer of 1915, Anchorage had a population of more than two thousand with a school age population of about two hundred. In August 1915, a school board was elected to oversee the development of a school and the hiring of teachers, but they had no money with which to function. The AEC had hastily drawn up provisions for townsite management and had overlooked the means by which a school could be financed.10 In June 1915, an executive order from President Woodrow Wilson authorized the laying out of the townsite and among the one hundred reserved lots for federal and public use was Block 52 for schools. The executive order withheld patents for five years, so the town could not tax or bond the real estate. When lots were sold, schools were excluded from the list of specific items for which assessments could be made. Under the Nelson Act of 1905, which provided funding through the Alaska Fund for schools in non-incorporated areas, the $1,000 available was inadequate for Anchorage’s needs. The members of the Anchorage Chamber of Commerce volunteered to fund the construction of a school building.11

Finally, under a broad interpretation of the grant of power in the Alaska Railroad Act (38 Stat. 305), the AEC received permission to construct a school building in the fall of 1915. The $5,000 contract was given to Parsons and Russell.13 The public subscription money raised by the AWC supplemented the Alaska Fund money which Alaska Territorial Governor J.F.A. Strong had granted to tide the town over until a permanent source to finance schooling could be found.14 Strong allocated $6,070 to the Anchorage school for maintenance in 1915-1916.15

The school opened on Monday, November 15, 1915, with roughly one hundred students and four teachers, with Ora Dee Clark as principal. The four-room wooden structure had been built in less than a month by the AEC in the late summer of 1915. The school had no running water and did not meet the town’s own sanitary regulations.16

By the summer of 1917, the Anchorage population had grown to over five thousand and school enrollment stood at over two hundred. By the fall of 1917, the AEC built a new, larger second school (Anchorage Public School) as well. Upon completion, the AEC donated the $45,000 school building to the school district.17 The two-story frame structure was located on Fifth Avenue between F and G Streets and was used for elementary and secondary classes until it was torn down in 1938 and replaced by Central Grade School, which later became the Old City Hall annex.18

Beginnings of Cultural Activity in Anchorage

Educated in the fine arts and music, Jane Mears was an energetic young woman who devoted herself to the community. She inspired community participation in musical and theatrical performances and often held rehearsals for local musicians and theatrical groups in her living room, accompanying them on her Steinway piano. These amateur performances were the beginnings of cultural activity in Anchorage.19

During World War I, Frederick Mears resigned from the AEC and left the Alaska Railroad project to enter active duty, accepting a commission as colonel of the U.S. Army’s 31st Railway Engineers Regiment, one of nine regiments sent to operate military railroads in France. The people of Anchorage held a gala farewell banquet and reception for Frederick and Jane Mears on January 3, 1918 in the Anchorage Labor Temple.20 After World War I, Mears and his family returned to Alaska. He took over as chairman of the AEC and chief engineer to complete the railroad. Mears resigned from the Army and the AEC on July 7, 1923 and, with his family, left Alaska for Seattle to start work for the Great Northern Railroad. He became chief engineer of the Great Northern Railroad in 1925, remaining in this capacity until his death in 1939.

Jane Wainwright Mears died on December 17, 1953, in Los Angeles, California. Frederick Mears died on January 11, 1939 at the age of 60. The couple is interred at the Fort Lawton Post Cemetery, Tacoma, Washington. They had three daughters (Josephine, Elizabeth, and Helen) and a son (Frederick, III).

The first school, known today as the Pioneer School House, was later used as the Pioneer Hall by the Pioneers of Alaska. The AWC, on its fiftieth anniversary in 1965, spearheaded the drive to save the original building and to relocate it to its present site in Ben Crawford Memorial Park at Third Avenue and Eagle Street.21 Owned by the Municipality of Anchorage, the building is managed by the AWC. The building is a community gathering place and is used for meetings of various groups, school tours, and for special occasions.22 The Pioneer School House was placed on the National Register of Historic Places on December 6, 1980.

Mears Junior High School (now Mears Middle School) in Anchorage was named in honor of Jane Mears in 1965 in recognition of her work to establish public education in Anchorage and in the development of the Anchorage public schools.

The personal papers of the Frederick Mears Family are held by two repositories in Anchorage and Fairbanks and are open for research. The Frederick Mears Family Papers, 1878-1941 (HMC-1063), are located in the Archives and Special Collections, Consortium Library, University of Alaska Anchorage.23 The Frederick C. Mears Collection is held by the Alaska and Polar Regions Collections and Archives, Elmer C. Rasmuson Library, University of Alaska Fairbanks.24 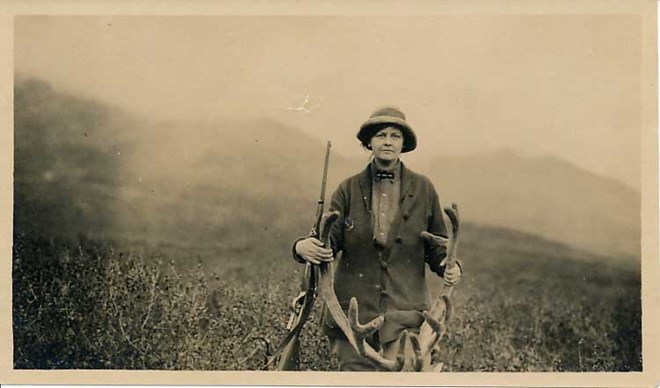 Jane Mears was ready to cope with new environments, first in Panama and then in Alaska. She hunted alongside her husband, Frederick, and is shown here with a caribou she had shot. 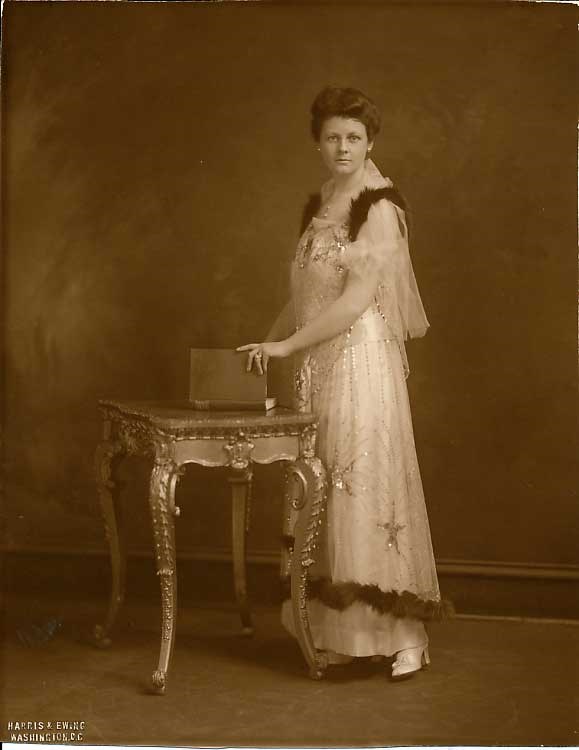 Jane Mears was a cosmopolitan, well-educated woman with a deep interest in music. 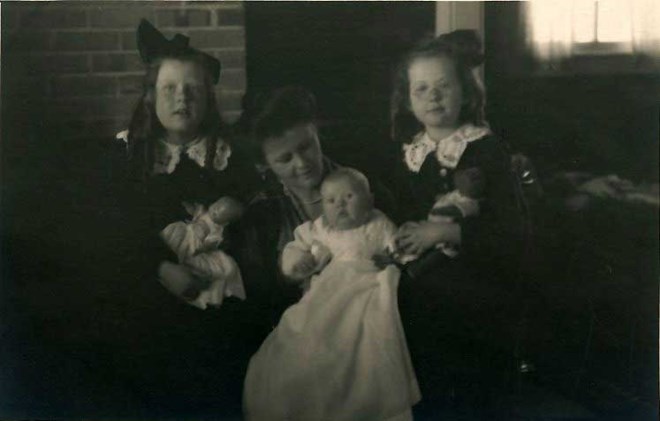 Jane and Frederick had four children, three daughters and one son. This photograph was taken shortly after her son, Frederick Mears, III, was born on Christmas day, 1915 in Anchorage. The son followed his father into the military. A third daughter, Helen, was born several years later, also in Anchorage. 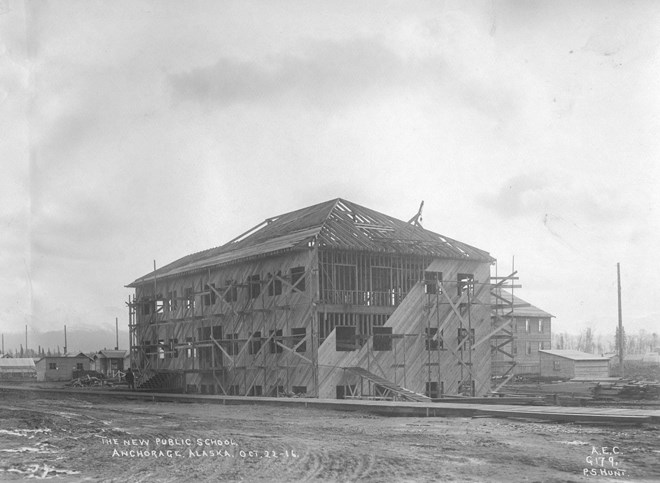 When the first school house became overcrowded, the Woman’s Club again lobbied successfully for a larger building, shown here being built in 1917. Jane Mears was deeply involved with education in Anchorage while she lived there, and Mears Junior High School (now Mears Middle School) was named in her memory. 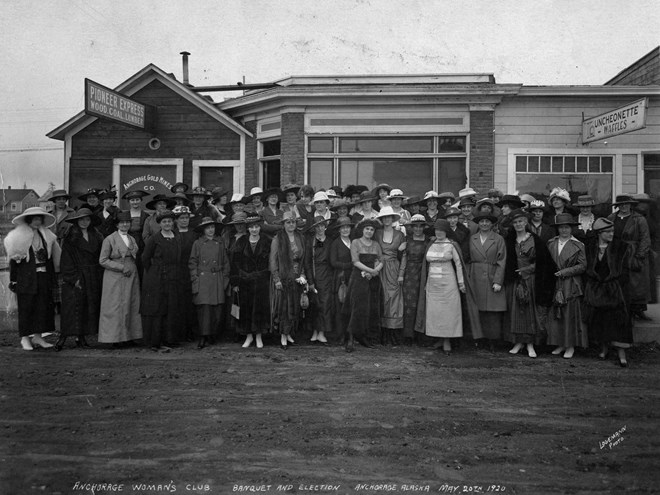 Jane Mears was instrumental in forming the Anchorage Woman’s Club, which was organized in her home. Mears was the first president of the club, whose determined lobbying led to the federal government’s funding the construction of the first school in Anchorage in 1915. The Woman’s Club became a powerful force in Anchorage, concerned with educational, health, and cultural issues.