The Path to Priesthood

Robert Dermot O’Flanagan was born on March 9, 1901, at Castle D’Arcy, Lahinch, County Clare, Ireland. He always used only Dermot as a first name.

After early schooling at Belvedere College, Dublin, a preparatory school for boys in Ireland, from 1908-1917, Father O’Flanagan entered a Jesuit novitiate at Tullabeg, County Offaly, Ireland, remaining there for three years. He did his theological studies at St. Ignatius College, Valkenburg, Limburg, Holland, and was ordained as a Jesuit priest there in 1929. From 1930 to 1932, he taught at a Jesuit secondary school for boys, Clongowes Wood College, in County Kildare.1

The year 1932 was a turning point in Father O’Flanagan’s life. In June, he left the Society of Jesus Jesuits, but remained a priest.   He attended a Eucharistic Congress in Dublin. Among those attending was Father Patrick J. O’Reilly, S.J., a veteran missionary of the Pacific Northwest and Alaska. As a result of hearing O’Reilly, Father O’Flanagan volunteered for service in Alaska. He was sent to America on the S.S. Manhattan, arriving in New York on December 15, 1932.

In January 1933, Father O’Flanagan arrived in Juneau. He was met by Joseph R. Crimont, S.J., Vicar Apostolic of Alaska, who assigned him a temporary mission, the parish of Seward. He was warmly welcomed by the people of Seward and wrote back to Bishop Crimont: “. . . people were falling over themselves trying to help me and make me feel welcome at home—the non-Catholics as much as the Catholics. It was worthwhile leaving Ireland for that alone.”2

After a short time in Seward, Father O’Flanagan was sent to Anchorage and appointed as pastor of Holy Family Parish in July 1933.3 He was sent to relieve the ailing pastor of Holy Family Parish, Father Godfrey Dane, for a “temporary stint,” but the appointment became permanent. O’Flanagan served as priest for both Anchorage and Seward for eighteen years. Once a month he would travel to Seward to care for the parishioners there, then return to his duties in Anchorage.

Father Louis L. Renner, S.J., in Alaskana Catholica: A History of the Catholic Church in Alaska (2005), said this of Father O’Flanagan: “It did not take Father O’Flanagan long to become a well-known figure in Anchorage. His reserve, soft-spoken words, and beguiling Irish ways opened doors and hearts to him and to his message. Frequently he visited the sick in the Railroad Hospital. On a winter day, a common sight was that of Father ‘O’ shoveling snow off the rectory porch or church sidewalks. He tended the church and rectory furnaces, and his dusty coveralls became him no less than did his black cassock.”4

Parishioners recalled Father O’Flanagan was the most remembered of all priests in early Anchorage. His first altar servers were John Bagoy and Gene Pastro. Bagoy said he was known for “his thick Irish brogue and his outgoing personality.”5  Bagoy said that the “ladies of the parish were worried about him not getting enough to eat or eating the right food.”6 His diet seemed to consist of coffee and sweet rolls. They devised a system whereby he ate dinner with various members of the church on successive nights.

Father O’Flanagan participated in local activities. He broached the subject of a new community hospital in Anchorage to Bishop Joseph R. Crimont, S.J., Vicar Apostolic of Alaska, and to the Sisters of Providence. In the summer of 1936, O’Flanagan became the leading member of a group of individuals with an interest in health care who actively lobbied the Sisters of Providence to establish a Sisters’ hospital in Anchorage. In the spring and summer of 1937, prominent citizens of Anchorage joined Father O’Flanagan’s lobbying effort, including Austin E. “Cap” Lathrop and physicians I.S. Egan, Howard G. Romig, Joseph R. Romig, and August S. Walkowski.7

In 1915, the Alaska Engineering Commission had made Anchorage their construction headquarters for the Alaska Railroad and had funded several new facilities, including the railroad hospital. The two-story, fifty-bed hospital opened on December 1, 1916. The Alaska Railroad hospital was “a severely plain, white frame building, with a simple pitched roof, perched between A and B Streets on a steep slope overlooking Ship Creek.”8 Although the hospital initially provided satisfactory services, as the Anchorage community expanded, it failed to keep pace with the growing needs of local residents.9 Colonel Otto Ohlson, General Manager of the Alaska Railroad, as part of his attempts to reduce the railroad’s deficit, made it more difficult for the local community to use the railroad hospital. In 1934, he began negotiations with the Sisters of Providence about operating a hospital in Anchorage and taking over the railroad’s patients.10  On June 26, 1935, an editorial in the Anchorage Daily Times stated: “The Anchorage hospital is overflowing with patients. A much larger hospital with more conveniences is sorely needed.”11

There was widespread public support for the establishment of a Sisters of Providence hospital in Anchorage. In 1937, the Catholic Sisters of Providence accepted the responsibility of building a new hospital. The Ninth and L Street Providence Hospital was formally opened under Sister Stanislaus of Jesus, the first Superior for the Sisters of Providence, in Anchorage, on June 29, 1939.12 Through Father O’Flanagan’s efforts and those of others, Anchorage and its hospital were better prepared for an era of sustained growth that would transform the community into Alaska’s largest city and commercial center.

The former “L” Street Providence Hospital building still stands at its original location and is used by the Anchorage Department of Health and Human Services.   With the city population increasing rapidly, and with the closure of the Alaska Railroad hospital, even the new hospital quickly proved inadequate. Forty-five acres of land for a much larger, modern hospital was acquired near Goose Lake in 1955. The new Providence Hospital was opened in October 1962.13

Father O’Flanagan served on the first Committee of Management for Anchorage’s first United Service Organization (USO) headquarters, which was located in a large log cabin at the corner of 5th Avenue and G Street. Opened on September 1, 1941, the Anchorage USO was a welcome place for military service members and their guests, and offered recreational activities, entertainment, socializing, and educational and spiritual services. Through the efforts of the Anchorage civilian population, local military authorities, and the New York USO, a larger, better equipped building was completed in February 1942. The large log structure, capable of holding five hundred people, was on a site leased from the Anchorage Post of the American Legion.14 In addition to becoming firmly involved in Anchorage’s community life through good works, Father O’Flanagan became a U.S. citizen on November 30, 1943.15

When Father O’Flanagan arrived in Anchorage, the Holy Family Church was a small wooden structure with a rectory. Father O’Flanagan began raising funds for a new building but it was a slow process during the Great Depression. In the mid-1930s, there was already talk about replacing the small, wooden church. World War II halted O’Flanagan’s drive to build a new, more substantial structure, to accommodate the increasing numbers attending. After the war, a drive to build the church was renewed and construction proceeded slowly as funds were raised. In 1946, construction began on the present church, Holy Family Cathedral (formerly, Holy Family Church), located on the corner of 5th Avenue and H Street. On December 14, 1947, the unfinished basement was ready enough for O’Flanagain to accommodate over two hundred people for the first mass. The one-story church, ornamented with geometric lines, has a square two-story bell tower at the front corner. The church was designed by Seattle architect Augustine A. Porreca in the Romanesque Revival style. In October 1948, the white cement exterior of the building was completed. The parish was able to use the main church, but the interior was not completed until 1952. In 1968, Holy Family Church was recognized as an archdiocesan cathedral.16

On June 28, 1951, Pope Pius XII established the Diocese of Juneau.17 The Catholic Church recognized that the expanding population of Alaska warranted creating a bishop’s post in the Territory. Father O’Flanagan was ordained and installed as the first bishop of the Diocese of Juneau. He was consecrated as bishop in Anchorage on October 4, 1951, and formally installed on October 7, 1951 in the Cathedral of the Nativity of the Blessed Virgin Mary. He celebrated his first mass as bishop in Juneau on October 7, 1951.

Upon his departure from Anchorage, the Anchorage Daily Times editorialized: “His friendliness and humility won him an immediate spot in the hearts of all people. He extended his three-month visit until it ran into years. His flock prospered and grew under his leadership. The magnificent new Church of the Holy Family will ever be a monument in concrete to the inspiration and spiritual leadership he gave.”18

The new Diocese of Juneau was comprised of 70,800 square miles and included southcentral and southeastern Alaska. The remainder of Alaska continued to be administered as a Vicariate Apostolic in the newly created Archdiocese of Seattle.  By 1961, the Diocese of Juneau consisted of eleven parishes, fifteen missions, four schools, and four hospitals. There were ten diocesan priests and five Jesuit missionaries to serve the estimated 20,000 Catholics. 19

Bishop O’Flanagan witnessed Governor Mike Stepovich’s swearing in at Fairbanks on June 8, 1957,20 and officiated at Representative Anthony J. “Tony” Dimond’s funeral in Anchorage on June 1, 1953.21   He visited many of the military installations throughout the state and accompanied various Catholic dignitaries on their tours of Alaska.

Bishop O’Flanagan traveled outside of Alaska to various Catholic gatherings. On July 15, 1959, he had an audience in Rome with Pope John XXIII.22 In September 1964 it was announced that he would attend the Vatican Ecumenical Council called by Pope Paul VI.23 In 1960, O’Flanagan gave the baccalaureate sermon at Carroll College in Montana and was awarded an honorary doctor of laws degree by the college.24

In August 1968, O’Flanagan retired as bishop for reasons of health. He retired to a Catholic retirement home in La Mesa, California, where he died on December 31, 1972.25 He was buried in the Catholic plot of Anchorage’s Angelus Memorial Park Cemetery. 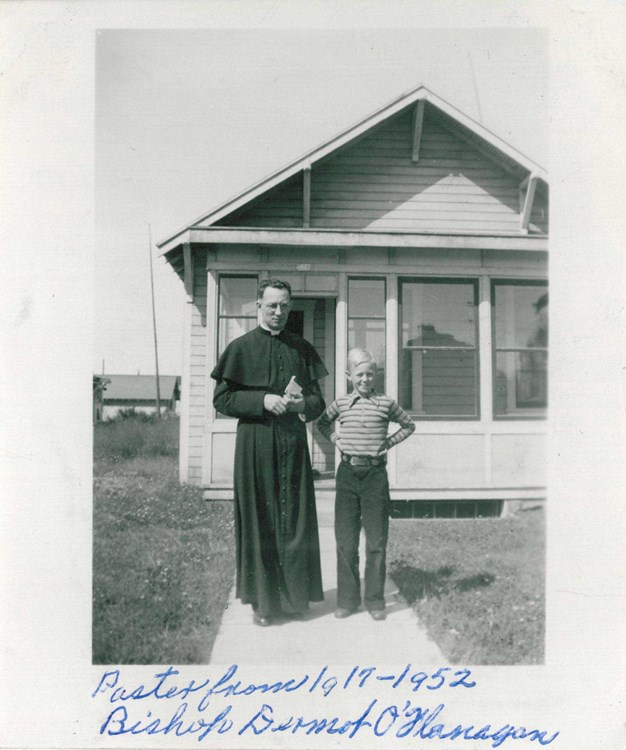 Father O’Flanagan standing before the Catholic rectory next to Holy Family Church in Anchorage in 1941. The name of the boy is unknown. 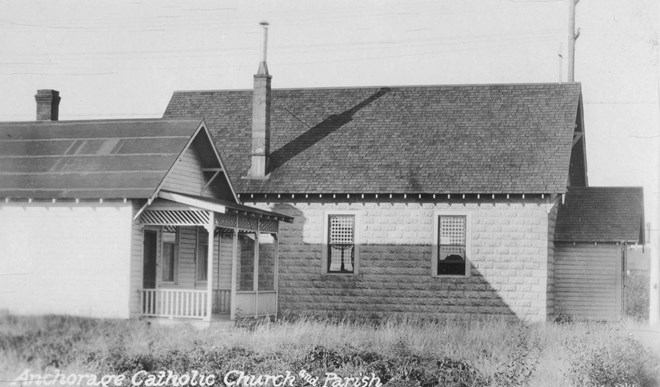 Another view of Holy Family Catholic Church and rectory. Father O'Flanagan was known for wearing an old set of working clothes to shovel out the walkways around the church. 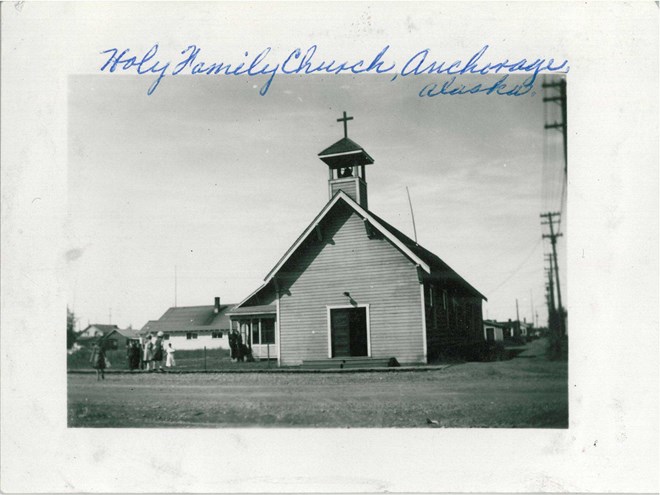 The original Holy Family Catholic Church in Anchorage, built in 1915 on two lots purchased by parishioner Anthony "Tony" J. Wendler at one of the original land auctions. The church was twenty-four by forty-eight feet, with a wooden frame and ornamental concrete block walls. Adjacent to it on the left was the tiny rectory where the priest would live.

Bishop O’Flanagan, detail from a picture of a confirmation in Anchorage. 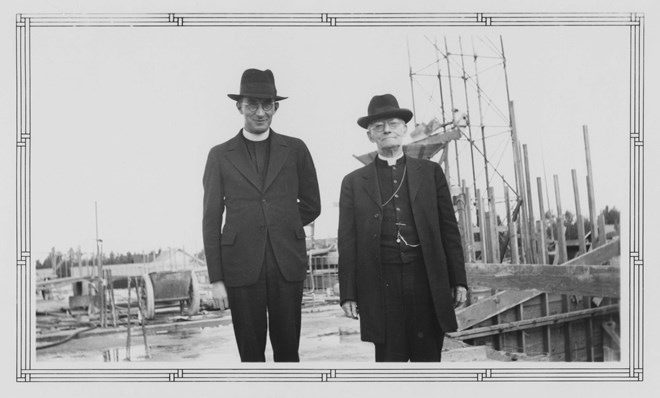 Father O’Flanagan on the left standing beside Bishop Joseph R. Crimont, S.J., Vicar Apostolic of Alaska, viewing the construction of the original Providence Hospital in Anchorage in the late 1930s. 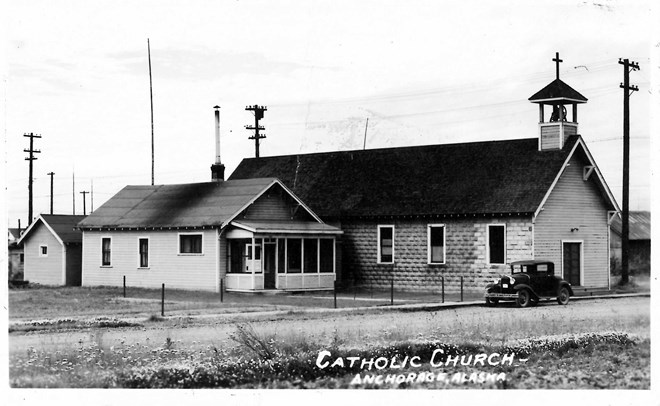 View of Holy Family Catholic Church and rectory in Anchorage