Frank I. Reed’s outstanding contribution was developing the Anchorage Light and Power Company (AL & P) and bringing hydroelectric power to Anchorage. When AL & P finished construction of the Eklutna power plant in 1929, it resulted in a twenty percent lower electricity rate to the City of Anchorage and the Alaska Railroad for industrial, commercial, and domestic use. Since the City of Anchorage sold power to private citizens, the rates were comparable to those paid by the residents of Seattle, Washington.   It marked the first time that one of the region’s basic resources, water power, had been tapped. The Eklutna power plant served the needs of Anchorage for twenty-five years, a time when the city grew from a small railroad town to the largest city in Alaska.

The Anchorage Daily Times, on June 29, 1944, summarized the contribution of Frank I. Reed to Anchorage’s development:

“As the founder of Anchorage Light and Power Co., Mr. Reed probably had more to do with the advancement of the city of Anchorage than any other individual and it is for this enterprise that the late Anchorage man was best known. Mr. Reed, with a few other men of vision, secured the important hydroelectric site at Eklutna lake [Lake] in 1922 and six years later financed and constructed the power firm. It not only gave Anchorage modern electrical facilities but within the past year has afforded what appears to be an increasing source of revenue for the city since its purchase by the municipality last October.”[1]

Frank Ivan Reed was born in Council Bluffs, Iowa on December 31, 1872, the son of Enos T. Reed and Mary Elizabeth Crockwell Reed. He grew up in Council Bluffs with one brother and four sisters. He moved to Nebraska as an adult to work as a railway express-man. When the Spanish-American War was declared in May 1898, he volunteered to serve with his brother, Charles. He enlisted on June 17, 1898 in a Nebraska volunteer infantry regiment that was formed for service during the Philippine Insurrection (1899-1902).[2] While suffering from malaria in a hospital, the brothers decided to go north to Alaska instead of returning to Nebraska. He was discharged from military service on August 23, 1899, at the Presidio in San Francisco, California.[3]

Early Years and Arrival in Alaska

Reed was attracted by the news of the Nome gold rush, and with his brother, in April 1900 sailed on the S.S. Zelandia to Alaska. After his arrival in Nome, he spent his first years working for the Solomon Dredging Company. While aboard ship traveling to Nome, Reed struck up a friendship with Pauline Hovey, who had sailed from San Francisco with her younger sisters, Ninta and Sybil, and mother, Sarah Metcalf (Hovey) Boynton. In 1900,  Boynton outfitted and financed operations on Nome Beach properties. They were enroute to Nome to take over the operations of a store in which her mother had purchased an interest. Pauline Hovey was born on October 20, 1883, in Munson, Geauga County, Ohio, to Orrin U. Hovey and Sarah S. Metcalf Hovey.[4] Pauline lived for four years in San Francisco with her mother, when she met Reed, whom she married in Seattle, Washington, on November 15, 1904. After a trip east, they returned to Nome in 1905, where they continued to live until 1913. On October 22, 1907, their first son, Paul, was born in Nome. On December 22, 1912, their son, Frank, M., was born in Seattle.[5]

Reed worked for several years in the Talkeetna area to establish a gold-dredging operation on Cache Creek while his family remained in Seattle. His mining activity on Cache creek brought him to Anchorage in advance of the laying of track for the Alaska Railroad. He took one of the first dredges into the Talkeetna area, towing it from Seattle and up the Big Susitna River as far as he could and then hauling it by horse train to the mine site. Frank Ivan sold out his interest in the Talkeetna dredge to one of his partners, and then moved to Anchorage, arriving on July 3, 1915.

Reed sought new business opportunities in Anchorage and invested in several new businesses, starting the Anchorage Lumber Company, a logging and sawmill operation. The lumber company sold materials to those building the Anchorage Hotel on 3rd and E Street. When the hotel was completed, the businessmen could not pay for the lumber and went defunct. Reed took over ownership of the hotel to satisfy the lumber yard debt.[6]

Reed owned the Anchorage Hotel, located on 3rd Avenue and E Street, from 1917 to 1936. C.B. Wark built the original hotel, a wood frame building, in 1916. In 1917, Frank Reed purchased the hotel, and remodeled and upgraded the building with electricity and new furnishings. The hotel developed a reputation as a luxury hotel, and guests arriving by steamship reached it by a boardwalk built between the city dock and the hotel. Guests arriving by dog sled could board their dogs at a nearby kennel. Pauline Reed was co-proprietor and manager.  She was hostess to thousands of travelers who stayed there over the years. American humorist Will Rogers and aviator Wiley Post stayed at the hotel two days before their fatal trip to Point Barrow, Alaska, on August 15, 1935. Other guests included President Warren G. Harding, U.S. Secretary of the Interior Harold Ickes, and Walt Disney. Landscape artist Sydney Laurence maintained a studio, apartment, or both, off-and-on, at the Anchorage Hotel or the Annex from 1920 to 1940.[7]

Frank Reed planned an addition to the Anchorage Hotel by beginning the planning and permits process but, in February 1936, sold the hotel to A.B. Cummings, the former manager of the Curry Hotel (Mile 248.5) of the Alaska Railroad, before ground was broken on a new, expanded hotel and annex. The expanded Anchorage Hotel and Annex opened in November 1936. The original hotel, but not the Anchorage Hotel Annex, was demolished in the 1960s when the new owner, Westward, razed the building to make way for a new, high rise hotel.[8]

In 1923, Reed founded the Anchorage Light and Power Company (AL & P), which built a hydroelectric power plant on the Eklutna River, forty miles northeast of Anchorage. The idea that hydroelectric power production from Eklutna Lake was feasible occurred in 1921, after Alaskan Engineering Commission (AEC) engineers John Longacre and C.D. Pollock conducted a brief survey which resulted in a highly favorable recommendation regarding future development at the lake for hydroelectric power production. The AEC ended its interest as generating electrical power for Anchorage as this was not a primary function of its operations. Reed and Longacre teamed up and began efforts to develop a power plant at Eklutna. However, the promotion of the project was largely accomplished by Reed.

From 1922 to 1928, Reed spent a significant amount of time getting the Eklutna power project off the ground. He filed a preliminary permit application with the Federal Power Commission (FPC) on September 28, 1922, and was issued a license to undertake power development. In 1924, he hired Seattle engineer Robert Howe to conduct an initial study, with an examination of the market for power, environment and climate at the proposed site, transportation issues, lake characteristics, head conditions, cost projections, and other aspects of the project. He secured contracts to purchase electrical power from the City of Anchorage and the Alaska Railroad and identified other potential markets outside of the immediate Anchorage city limits.   After concluding the long process of authorizing the project, he gained financial support for the project through the Russell-Colvin Company, investment bankers in San Francisco, California. Through the sale of bonds, $750,000 was raised to finance the construction for the project, with Reed originally owning thirty percent of the stock.

Construction of the Eklutna power project started in July 1928, and full-time power production began in January 1930. In July 1928, construction began on the Eklutna power plant project, although it was not until October that work on the major units – the dams, penstock, powerhouse, and substations—was begun. Construction of a transmission line from Anchorage to Eklutna from the AEC’s plant to power construction activities was carried out at top speed and completed at the end of 1928. The three construction areas were spread out over a distance of twelve miles, with a storage dam built at Eklutna Lake, a diversion dam site seven miles downstream on the Eklutna River, an 1,800-foot tunnel through Goat Mountain (used to channel water from the diversion dam to the penstock on the other side of the mountain), and a powerhouse site about two miles from the diversion dam. The Jasper-Stacy Company of San Francisco was awarded the general contract for construction. On September 8, 1929, Eklutna power plant was finished just before the stock market crashed in October 1929.[9]

In 1943, the City of Anchorage acquired the Eklutna power plant from AP & L largely through the personal efforts of Mayor William “Bill” Stolt, an electrician.   On August 27, 1943, the voters approved $1,250,000 in general obligation bonds to purchase the Anchorage Light and Power Company, saving the taxpayers substantial sums in subsequent years. This was the nucleus of the City of Anchorage’s Municipal Light and Power. On March 1, 1944, the license transfer was approved by the Federal Power Commission. [10] When AL & P was sold, Reed owned approximately 60% of the company’s stock. In 1930, when Russell-Colvin was forced to dissolve during the Depression, he was able to amass sixty percent of the stock.[11]

Frank I. Reed was active in community and civic affairs. He served one term (1920-1921) on the first Anchorage City Council elected after the city’s incorporation on November 23, 1920. He was a promoter of a road to Palmer and of upgrading the horse and wagon fire department to motorized American LaFrance pumpers. He served a term as president of the Anchorage Chamber of Commerce. He was also a member of the Anchorage Elks Lodge, Anchorage Masonic Lodge, the Shriners, and the Veterans of Foreign Wars.[12]

Pauline Reed was prominent in the business, social, and political life of Anchorage, and was the National Republican Committee Woman for Alaska in 1931-1932.  She was a member of many local organizations and was an active member of the Alaska chapter of the Daughters of the American Revolution (DAR).

Pauline Hovey Reed died suddenly in Seattle, Washington, on May 4, 1934, of following an operation.[13] In addition to her husband, Frank Reed, she was survived by her two sons, Paul and Frank M.

Reed suffered from failing eyesight due to an injury suffered to his left eye during the Spanish-American War. Around 1936, he moved to California to be near specialists who were treating him. He sold the Anchorage Hotel in 1936 to D.W. Metzdorf. He continued to take an active part in the management of the Anchorage Light and Power Company and was a frequent visitor to Anchorage prior to the time the City of Anchorage bought the power company in 1944. In the early 1940s, he and his second wife, June, lived in Redwood City and then in Burlingame, California.[15]

Frank Ivan Reed died in San Francisco, California, on June 28, 1944. He and Pauline Reed are buried in Acacia Cemetery in Seattle, Washington.[16] 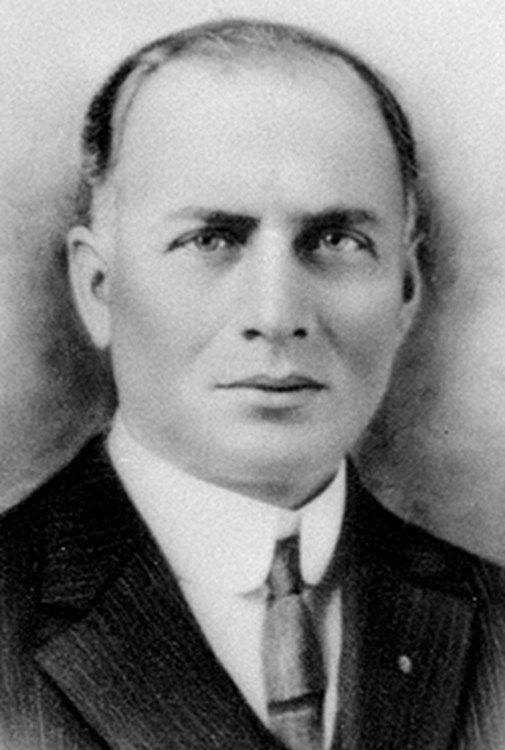 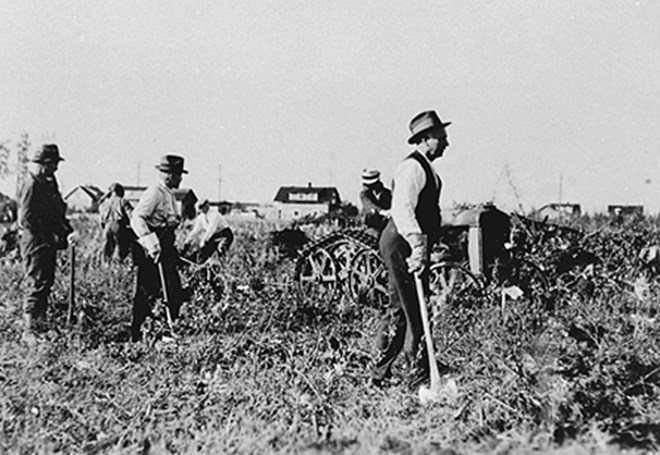 Frank Reed and others, clearing a fire break at the Anchorage "Park Strip," 1917. 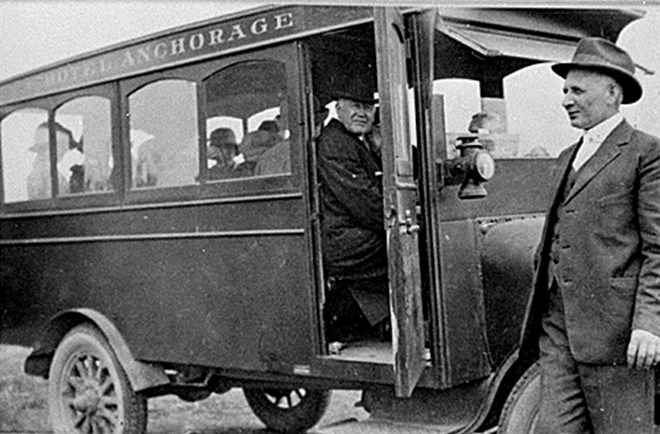 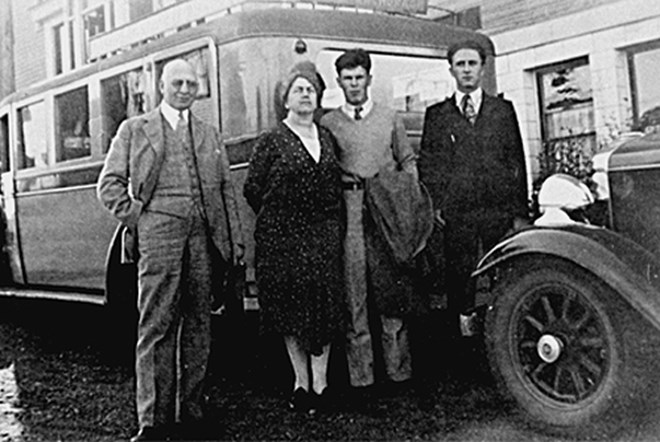 Frank and Pauline Reed and sons Paul I. and Frank M., in front of the Anchorage Hotel, ca. 1930. 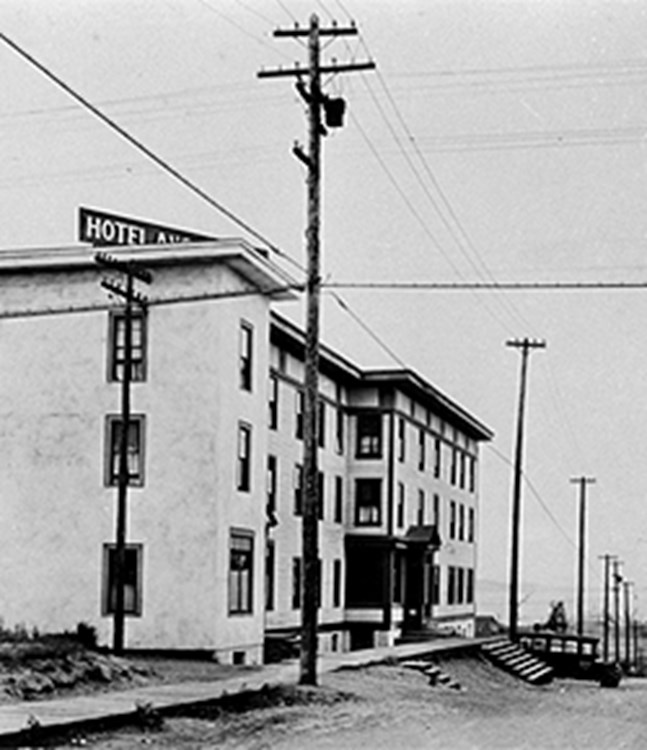 The original Anchorage Hotel at the corner of 3rd Avenue and E Street, 1923. 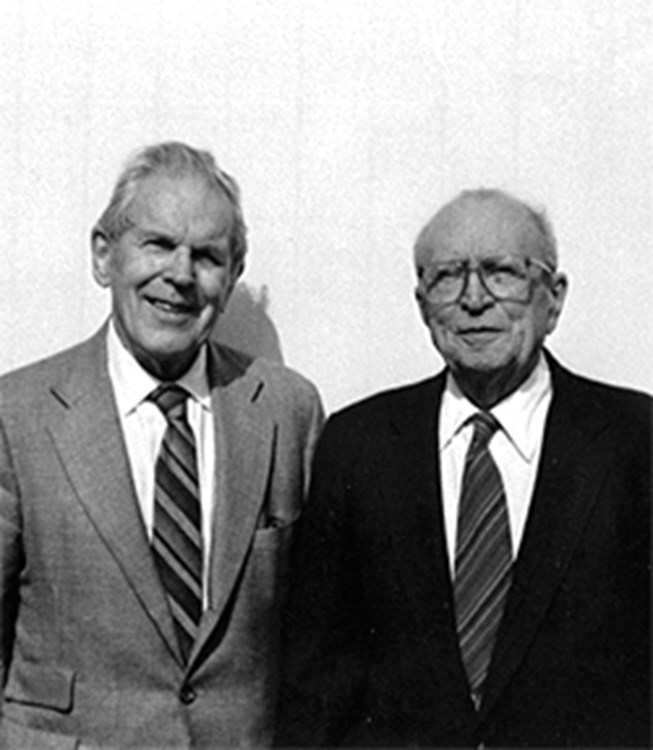 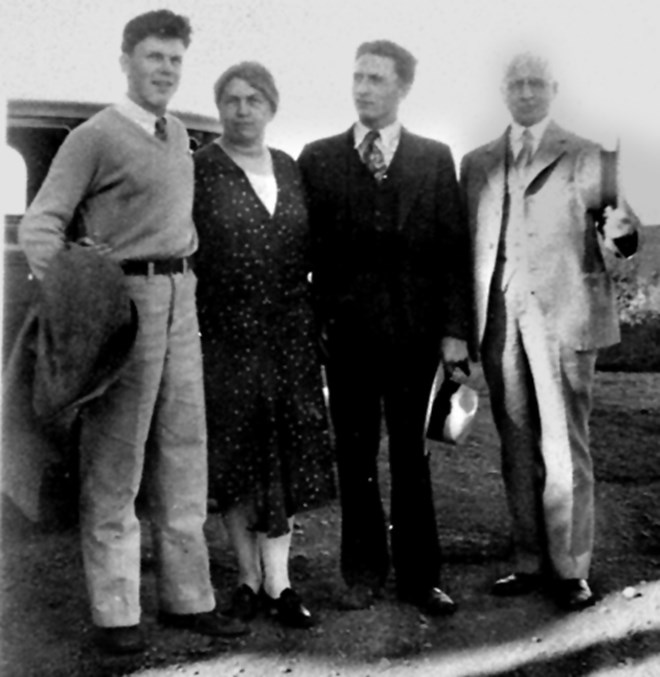 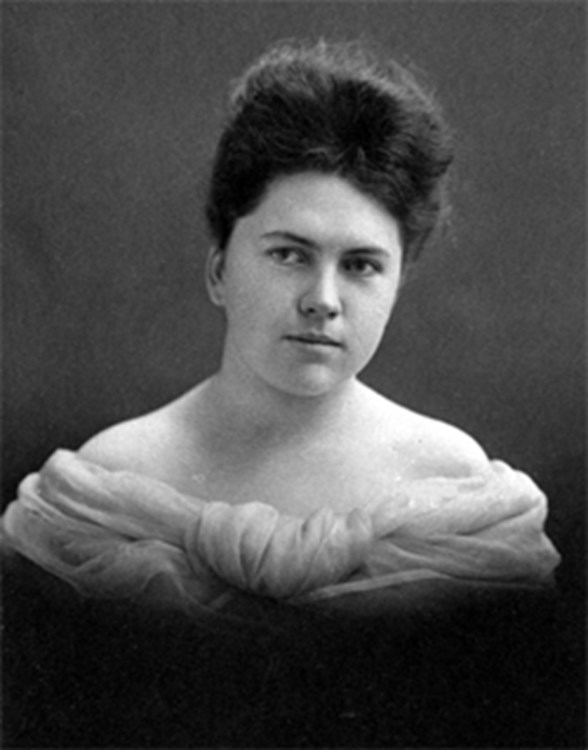