Grant Reed served as Mayor of Anchorage, Alaska, from 1928-1929, while concurrently working for the Alaska Railroad as station agent.  In 1924, he was appointed to fill the term of R.S. Temme, who had resigned his seat, on the Anchorage City Council.  In 1926, he was elected to a full term on the city council.

Reed married Gertrude "Gertie" Bulemore on August 28, 1889, in Venice Township, Shiawassee County, Michigan.  He was twenty-one years of age, she was nineteen.3  By 1910, they were divorced and Gertie was living with her parents, James and Elizabeth Bulemore and younger brother, Walter, in Venice, Michigan.4  Several years later, he married Sarah H. Reed, a Canadian immigrant, who arrived in the United States in 1907.5

In 1900, Reed came to Alaska to work as an agent for the White Pass and Yukon Railway at Skagway. He was appointed agent for the Alaska Steamship Company in Skagway in 1908, and later was the ticket agent for the Copper River and Northwestern Railway in Cordova.6  In early August 1913, he stampeded to the Chisana mining district.  He located a claim on the left fork of Chathenda Creek, but is better known for operating a general mercantile store at Bonanza City, a mining camp at the mouth of Bonanza Creek.  A community of its own, Bonanza City consisted mostly of tents but had a few cabins, four stores, two hotels, and a restaurant.7 Reed remained in the Chisana mining district until 1917, when he again became an agent for the Copper River and Northwestern Railway.  He was later transferred to McCarthy as the railway’s agent, where he operated another store until 1919, when it was destroyed by fire, and he went out of business.8  In February 1920, he was hired by the Alaskan Engineering Commission to work on construction of the Alaska Railroad, working first at Tunnel and Matanuska before transferring to Anchorage in 1921.

When R.S. Temme resigned his seat on the Anchorage City Council, Reed was appointed to complete his two-year term on June 4, 1924.  In April 1926, he was elected to his own two-year term.

On June 19, 1928, during Reed’s tenure as mayor, Anchorage voters approved the sale of $75,000 in general obligation bonds to build a new elementary school, with support from the Anchorage Woman’s Club and the Anchorage Chamber of Commerce.  Previously, the voters had rejected this bond issue when a special election was held on May 9, 1928.9  Reed gained the city council’s approval to hire a summer season employee to staff the Anchorage Chamber of Commerce’s information bureau to promote tourism and to assist visitors.10  All residents served by the city’s sewer system were required to hook up to the sewers and to cease using outhouses.11  He continued to work for the Alaska Railroad while serving on the Anchorage City Council and then as mayor.

On September 8, 1924, Reed and his second wife, Sarah H. Reed (known as “Sadie”) opened a new women’s apparel store, called Reed’s Dry Goods Store,12 in the International Order of Odd Fellows Building13 on Fourth Street next to the Anchorage Drug Company.  The I.O.O.F. Building, a three-story, reinforced concrete building, was built in 1923.14

Sadie Reed was known as an excellent seamstress.  Several weeks earlier, it had been announced that Lipman Simson had sold his entire stock of ladies’ wear and dry goods to the Reeds.  The new business was opened after the entire stock of women’s wear had been transferred from Simson’s store in the Sultan Building to retail space in the I.O.O.F. Building. After renovations and alterations were completed for Reed’s Dry Goods Store, the Anchorage Daily Times published this description:  “The new store has been decorated in a quiet French gray, and new shelves and racks have been made especially for the display of coats and dresses.  In the rear of the store comfortable fitting and dressing rooms have been built.”15 Simson closed his business and moved to Reno, Nevada, where he opened another clothing store.16

Reed retired from the Alaska Railroad in 1936.  Sarah Reed, who had recovered from an earlier stroke, suffered a relapse in September 1936.17  She became seriously ill and died in Seattle, Washington, on November 5, 1937.  After his wife’s death, Reed, in failing health, sold the store.

In the late 1930s, Reed became an invalid.  He hired Agnes Sayres from Ketchikan as a nurse, whom he reportedly married on December 27, 1938 at Santa Ana, California.  They moved to Long Beach, California, in 1940.18 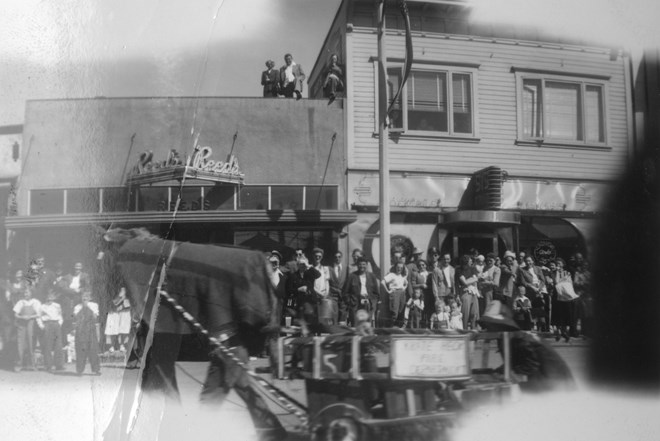 Reed’s Store on July 4, 1949. Although the Reeds were both deceased, the store retained the name Reed’s for some years after Grant Reed sold it. 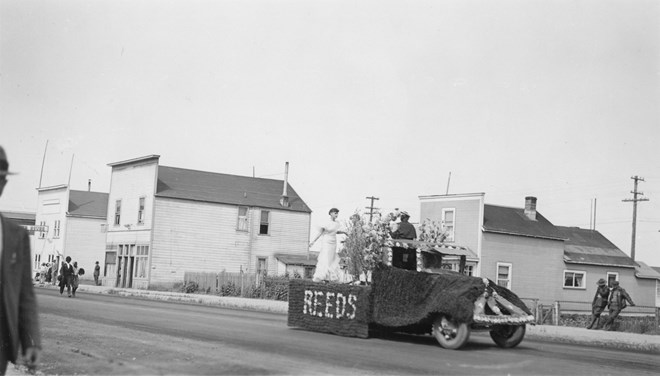 14. In 1945, the I.O.O.F. Building was purchased by Frank and Pauline Reed and the name was changed to the Reed Building.  Ibid.