Harry G. Seller was born in London, England on April 17, 1880[1], the son of a British army officer, George Seller, and Caroline Seller.[2] Before immigrating to United States he fought in the Boer War (1899-1902). He arrived in the United States in 1900 and spent some time on the east coast working as a newspaper reporter and photographer.

It was in Atlantic City, New Jersey, where Harry Seller met his future wife, Kathryn Dyakanoff, in about 1905. She was born on December 7, 1884, in Unalaska, Alaska. Her family, the Dyakanoffs, were a prominent Aleut (Unangan) family from Unalaska.

Sheldon Jackson, the General Agent for Education in Alaska, selected Kathryn Pelagiia Dyakanoff to attend the Carlisle Indian School, in Carlisle, Pennsylvania, when she was twelve years old. Following her graduation from Carlisle, Kathryn entered Westchester State Normal School where she received her teaching degree in 1907. Since she was an Alaska Native she was only granted a temporary certificate to teach in Alaska. Through perseverance and demonstrated ability she finally received her permanent teaching certificate in 1925. She was subsequently given her first teaching assignment with the U.S. Bureau of Education in Sitka, Alaska in 1908.[3]

When Alaska was organized as a civil district in 1884, the Organic Act and, later, the Second Organic Act of 1900, provided for education “without reference to race.” However, the school system that evolved reflected the racial views of the nineteenth century, with the initial goals being to Christianize and “civilize” Alaska Natives.[4] In 1905, Congress bowed to pressure for legally segregated schools by passing the Nelson Act, which established a dual system of education in the territory. It provided for the establishment of schools outside incorporated towns in any community but only "white children and children of mixed blood leading a civilized life" were entitled to attend.[5] In this context, numerous schools in remote Native villages throughout the Territory were operated by the U.S. Bureau of Education, and schools for white children and a small number of "civilized" Native children were operated by the Territory of Alaska in incorporated towns.[6] In March 1931, the responsibility for the education of Alaska Natives was transferred by the U.S. Secretary of the Interior to the Office of Indian Affairs, later the Bureau of Indian Affairs.

On June 1, 1910, Harry Seller and Kathryn Dyakanoff were married in Seattle, Washington.[7]  Together, they were commissioned by the U.S. Bureau of Education to build a government school in the Aleutian Islands.  As a consequence, their honeymoon was a voyage to Atka, Alaska on a sailing schooner. The Bureau of Education provided them with $170 in construction materials and three special items the government had conceded to Kathryn: an organ, a cow, and a bull.  Their first daughter, Renee Lois Seller, was born in Atka in 1911.

Their Aleutian teaching experience took them to other villages besides Atka, to Alitak, Uyak, Akiak, Unalaska and, finally, Tyonek, where they taught for one year. From Tyonek they moved their family to Anchorage in 1920 so their children could attend high school. For one year, Seller was Anchorage's first game warden with responsibility for the Seward area as well. He also contributed his time and effort toward establishing the first Anchorage library, along with Mary Wever, and was instrumental in establishing KFQD, the first radio station. The Alaska Railroad employed him until his untimely death in 1936.

Kathryn Dyakanoff Seller was a strong, pro-Native activist. Throughout her teaching career she remained deeply committed to helping Alaska Native people. After her husband’s death, she returned to teaching, with assignments at Beaver, Tyonek, Alitak, Eklutna, Lake Iliamna and parts of southeast Alaska. She has been listed as an outstanding Aleut basket weaver[8] and she also wrote three essays for the Pathfinder, the publication of the Pioneers of Alaska.[9] Ultimately, her outstanding work among Alaska Natives, which spanned the disciplines of education, midwifery, and church and social work, was recognized by the U.S. Department of Interior in 1950, when she received a special award for commendable service. That same year Congress awarded her a medal for "outstanding service to her people."

Adventurer and newsreel photographer Will E. Hudson wrote a narrative of his 1913-1914 trip to Alaska and Siberia in a book entitled, Icy Hell: Experiences of a News Reel Cameraman in the Aleutian Islands, Eastern Siberia and the Arctic Fringe of Alaska (1937). He stopped at Atka, and wrote somewhat condescendingly of meeting Kathryn Dyakanoff Seller:

"The little Native school was under the direction of an Aleut girl who received her education in the States. If ever there was a saint living on earth, I am sure it was this faithful, cultured Aleut maiden, who was slaving herself half to death in an effort to help her charges in faraway, lonely Atka."[10]

Harry G. Seller died on July 25, 1936, at the Anchorage Railroad Hospital of heart and liver ailments.[13] He is buried in the Anchorage Memorial Park Cemetery, next to his daughter, Renee Seller McCullough. Katherine Dyakanoff Seller died on June 17, 1980 in San Francisco, California, and is buried at the City of Sonoma Valley Cemetery, Sonoma, Sonoma County, California.[14] They were survived by five of their six children, Renee Lois Seller Showell McCullough; Marjorie H. Seller Dorbandt ; Harry George; John; and Betty Seller Blalock. Their son, Alfred, died at the age of seven. 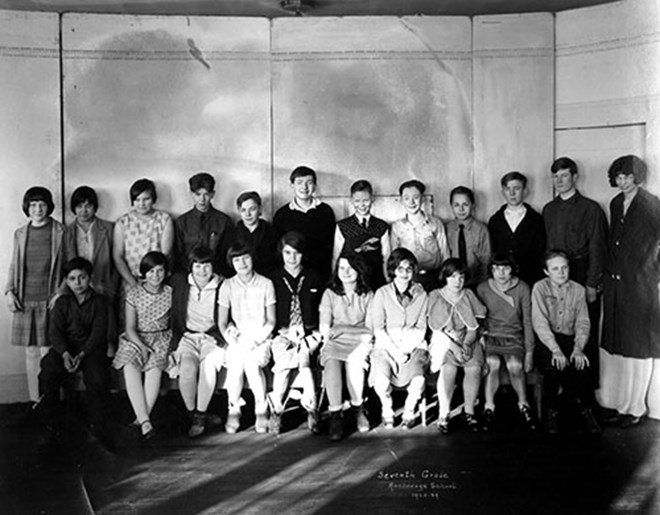 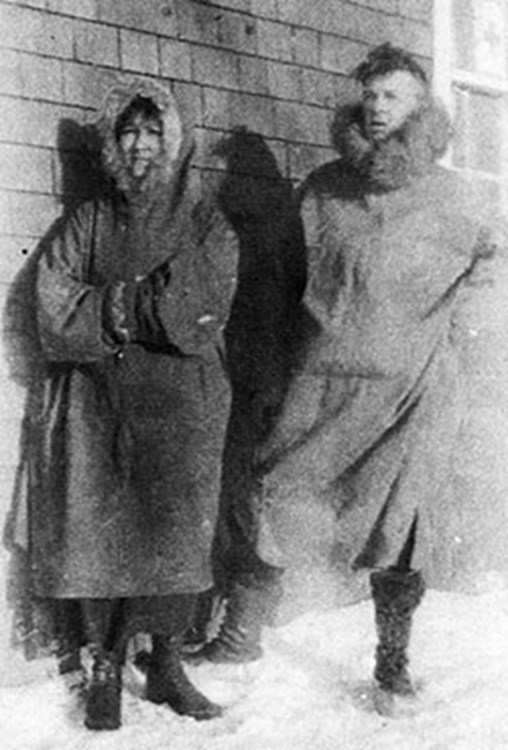 Kathryn and Harry Seller early in their Alaska teaching career. 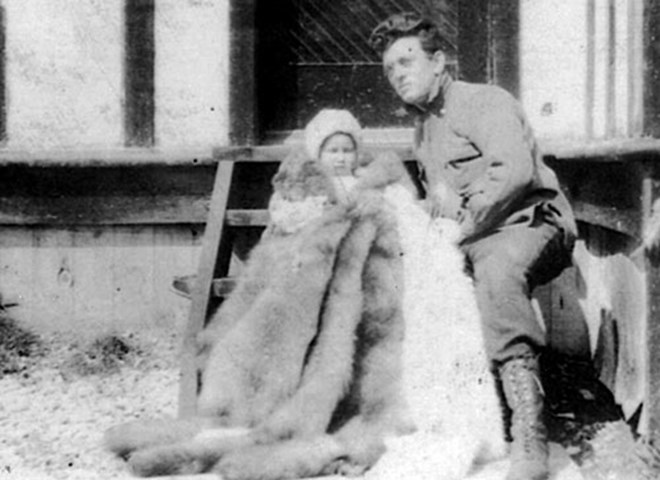 Harry and daughter Renee on her first birthday on Atka, 1912, where Kathryn was teaching. The furs were gifts to Renee. 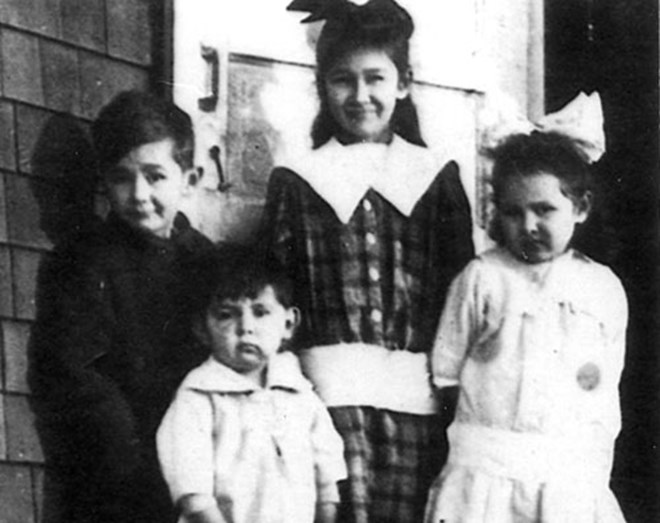 The Seller children - Renee, Alfred, Marjorie, and Harry, in 1917 at the village of Alitak on the southwest coast of Kodiak Island. 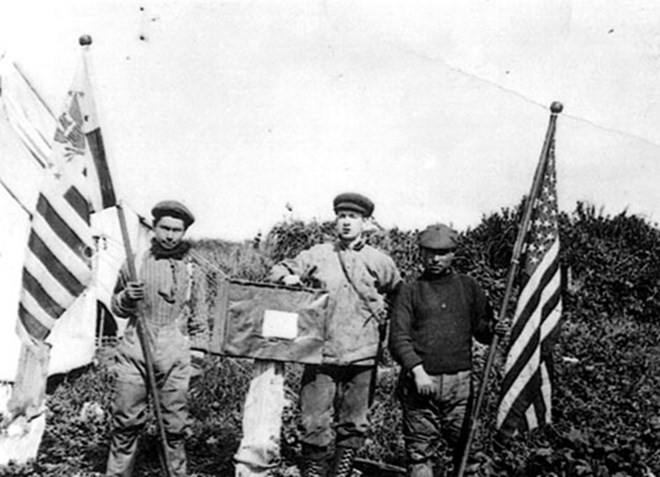 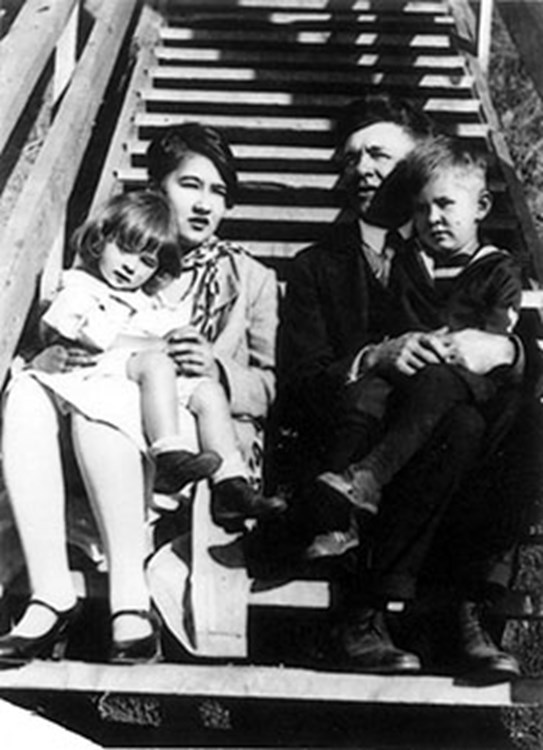 Renee and Harry Seller with younger children Betty and John on the steps of their home in Anchorage at the end of Fourth Avenue, 1927. 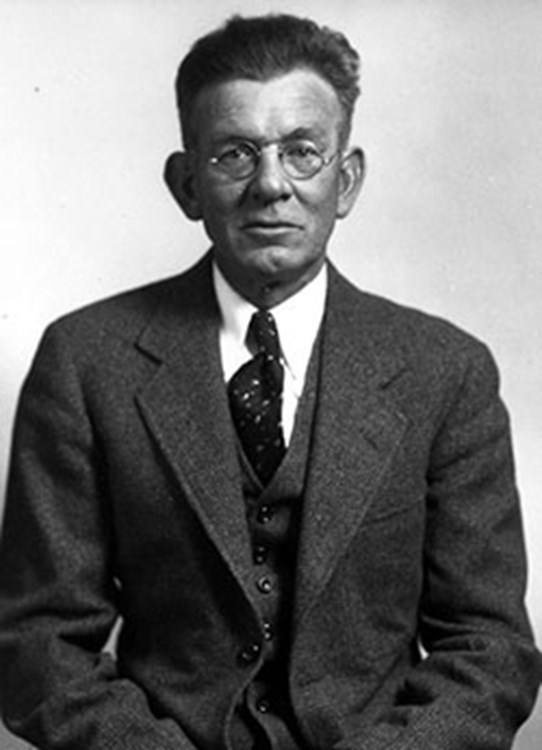 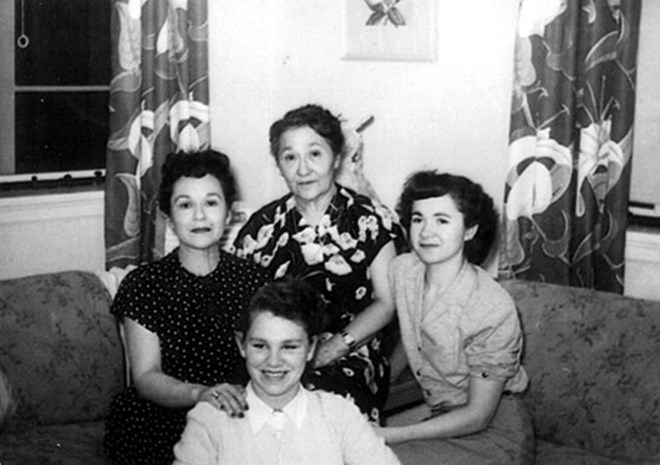 Kathryn with her grown daughters - Marjorie and Betty and grand-daughter Patricia Dorbrandt, 1954.

[10] Will E. Hudson, Icy Hell: Experiences of a News Reel Cameraman in the Aleutian Islands, Eastern Siberia and the Arctic Fringe of Alaska (New York: Frederick A. Stokes Company, 1937), 30.