The flashy, somewhat shady, self-promoting Joseph “Joe” Spenard was one of the most colorful “characters” who became identified with Anchorage from its beginnings as a railroad construction camp until his death in 1934.1  He is the namesake of the present-day Spenard neighborhood of midtown Anchorage.  It was the name of a municipally-owned lake and full-fledged recreation site with a roadhouse, boating, and bathing facilities.  The floatplane base at Lake Hood-Lake Spenard has been acknowledged as the busiest operation of its kind in the world.2  During the construction of the Trans-Alaska Pipeline (1969-1977), Spenard was one of the “red light districts” in the Anchorage area.  Since the early 1980s, the Municipality of Anchorage has worked with the adjacent residential neighborhood to revitalize the area from a seamy area into a hipster neighborhood.  Spenard Road, the commercial heart of Spenard, connects the neighborhood to downtown Anchorage.3

Joseph “Joe” Arthur Spenard was born on July 15, 1879 in Ottawa, Ontario, Canada, of French Canadian parents, Alexander Spenard and Emile Martell (or Martel4) Spenard.5  Little is known about his early life in Canada.

About 1906, Spenard married Edith Lewellyn Spenard (April 24, 1880-October 16, 1959),6 born in California of Welsh parents, William Lewellyn and Esther Jones Lewellyn.7  Joe Spenard and his wife, Edith, arrived in Valdez about 1909, where he was first listed as the vice president of the Alaska Securities Company, a firm lacking in durability in a town too small for a “securities broker” to make a living.8  He then opened a second-hand business, and bought, sold, or swapped household furnishings, tools, mining equipment or anything else of value that came on the market.  When business was slack, he reportedly pushed a loaded hand cart around the streets of Valdez, showing his wares.  The push cart eventually developed into a full-scale transfer business, which he advertised in the spring of 1913 as the City Express, a delivery and taxi service.  Edith Spenard rented furnished rooms.9  In 1913, Spenard became a naturalized American citizen after filing a petition for naturalization at the U.S. District Court at Valdez.10

Joe and Edith Spenard moved to Anchorage early in 1916.  Spenard opened a branch of his City Express while operating at both Anchorage and Valdez until the summer of 1916, when he closed the Valdez portion of his business.11

Spenard’s notoriety as one who enjoyed a “good time” was established during his first year in Anchorage.  When he was running his City Express delivery service, the Anchorage Daily Times described some of his personality: "Joe Spenard caused considerable excitement Saturday afternoon when he attempted to drive his yellow car through the doors of Robarts pool hall.  He made the attempt for a box of cigars promised him by Jack Robarts if he accomplished the feat; otherwise he was to pay the damages.  Joe is still smoking his pipe."12

According to several sources,13 Spenard used a REO truck to haul goods or make deliveries.14  His niece, Helen Clark, recalled that he used a REO motor truck to haul freight from the dock during the summer and firewood, which he chopped, during the winter.15  In 1981, historian Claus-M. Naske identified another vehicle, a Ford touring car shown decorated for the September 4, 1916 Labor Day parade, as Spenard’s vehicle for picking up passengers.16

He was a showman at heart, and had a talent for attracting attention to himself and his motorized transfer business, carrying passengers, hauling goods, and selling whatever he could from the back of his REO truck.  There was a lot of small boat transportation which served communities on both arms of Cook Inlet and on the Susitna River.  He displayed a bulletin board and a tide timetable on the outside of his car as a further public service.17 Sometimes, the bulletin board would be displayed on the hood, with lettering such as:  “Northwestern due about 2 P.M.” for those who wanted to meet the ship.18  He kept the times of low and high tide posted.  The radiator of the bright yellow truck was plastered with his slogan:  “Time and Tide will Not Wait, But City Express Is Never Late.”19

In addition, he frequently ran attention-getting jingles in the local newspapers.  In the Anchorage Daily Times on June 26, 1916, this appeared:

"Of all the cars both big and small,

The yellow car just beats them all.

Is given by the City Express."20

Owning one of the few trucks in Anchorage, he also towed local firefighting equipment.21  He endeared himself to local residents by volunteering to hook the town’s fire apparatus to his REO truck, taking it to the scene of a fire, whenever the alarm sounded.  Two hand hose carts and a hand chemical engine consisted of the town’s total fire equipment.

According to photographs from this period, he was “a smooth-shaven, firm-jawed fellow, carrying a stub of cigar in his teeth and wearing what appears to be a conservative blue serge suit and uniform cap with a brass shield and the word Express above the bill.”22  Spenard bought himself a yellow suit with a matching plug hat.  He wore this gaudy outfit only on special occasions and, when business was slack, packed the REO truck with as many youngsters as would fit and hauled them around town.  He liked to judge what constituted a special occasion and he was likely to trot out his special suit at almost any moment.  On May 15, 1916, the Cook Inlet Pioneer, reported this account: "The genial, fun-loving Joe Spenard played the part of Santa Claus to about a hundred school children yesterday.  Joe, dressed in his famous suit of yellow with top hat to match, took the youngsters in relays for an auto ride through the streets of Anchorage, and judging from the smile Joe wore and the singing and laughter of the children, the pleasure was mutual."23

Cutting and hauling wood was a lucrative business and Spenard was looking for a wood source when he became interested in what was unofficially known as Jeter Lake, some five miles south of town.  In 1909, Chugach National Forest was created.  The lake (like all of what is now Anchorage) was in forest reserve land within Chugach National Forest and closed to homesteading at the time.  In spring 1909, Thomas Jeter built a lakeside cabin and had made improvements on forest reserve land.  Jeter was compelled, under court order, to give up his land.  Not long after Jeter lost his court battle, the area was opened for homesteading.  In July 1916, Spenard claimed a 160-acre homestead which included the area known as Jeter Lake.  Spenard went ahead with his plans to develop the lake and surrounding land.  His plans called for a full-scale resort with a roadhouse, bathhouses, and a bathing beach.24

Spenard temporarily shut down his express business to devote his entire time to the resort, and carrying people to and from the lake.  By August 6, he had completed a dance pavilion and picnic tables.  On August 4, 1916, the name of Lake Spenard seems to have appeared the first time in print when the Anchorage Daily Times reported that the annual Elks picnic would be held there.25

Spenard needed an access road to his resort.  He persuaded members of the Bill’s Club, predecessors of the Anchorage Elks Club, to help him cut trees and build a corduroy trail from the city boundary at Ninth Avenue and L Street across Chester and Fish Creek valleys to the lake along a route of what is now Spenard Road.  He cleared a portion of the lake for the dance pavilion.  Although the U.S. Forest Service informed him that cutting trees and building resort facilities in the Chugach National Forest was illegal, the lake and dance pavilion soon became very popular with Anchorage residents.26  His name was associated with bootlegging or the making, distributing, or selling of illegal liquor.27

On the night of May 24, 1917, a fire probably set by careless hunters completely destroyed Spenard’s houses, the dance pavilion, picnic tables, and other improvements.  The business was a total loss, reported at $2,000, as he lacked fire insurance.  Shortly afterwards, he broke his leg and a heart condition grew worse, which made it difficult to carry on his transfer business.  In September 1917, he sold his yellow car and business, and the Spenards headed to the Lower forty-eight states for the winter, promising to return in the spring, but never did.28

In 1918, Spenard worked briefly as a ship fitter in San Francisco, California.29  The Spenards settled in Sacramento, California, where they operated a small hardware business until Joe’s death on August 8, 1934. It was announced in local newspapers that Edith Spenard would continue to carry out his business, without mention of what the business was.30

His widow, Edith Lewellyn Spenard, died on October 16, 1959 in Stockton, California.  The couple is buried in the Masonic Lawn Cemetery in Sacramento, California.31

Lake Spenard continued to be a popular summer and winter recreational site for Anchorage residents.  On April 16, 1919, the U.S. Forest Service designated the land around the lake for recreational purposes at the request of the City of Anchorage.  In 1923, President Warren G. Harding, while in Alaska to dedicate the Alaska Railroad, spent a short afternoon there.32  The Elks Club and the Boy Scouts maintained facilities at the site until the city established a park, Spenard Beach Park, and hired staff to perform maintenance and supervise concessions.  The original special use permit allowed use of the parkland in the summer only, and as many as eight hundred residents and visitors swam on the weekends.  In the winter, Spenard Beach Park was a popular skating venue.  Spenard Lake continues to be used for recreation but is best known as part of America’s largest float-plane base.33 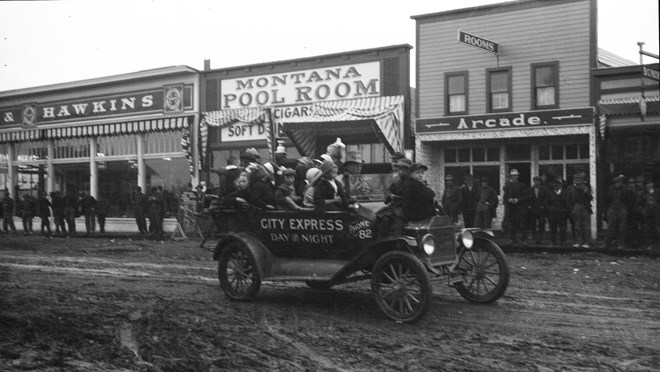 Joseph "Joe" Spenard had one of the first gasoline powered vehicles in Anchorage which he used in his hauling or "transfer" business, City Express. He enjoyed being around children, and photographs often show him driving in a parade, his vehicle crammed to overflowing with children. 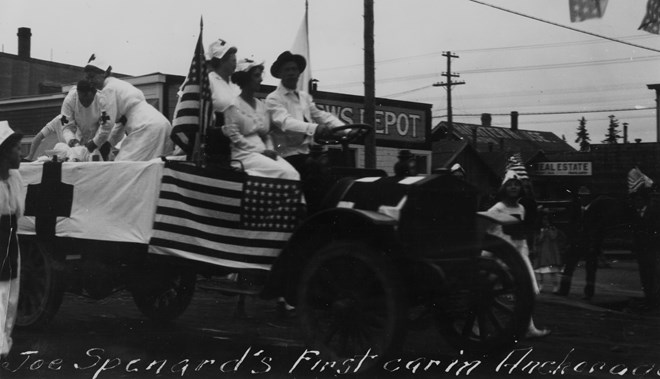 Another view of Joseph "Joe" Spenard driving in a parade, this time touting the American Red Cross, possibly during World War I in 1917 or 1918. Whether he had the first automobile or truck in Anchorage is less certain. 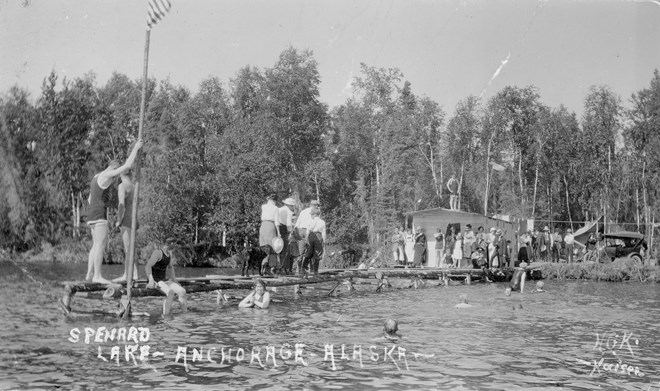 Another view of the Lake Spenard waterfront. 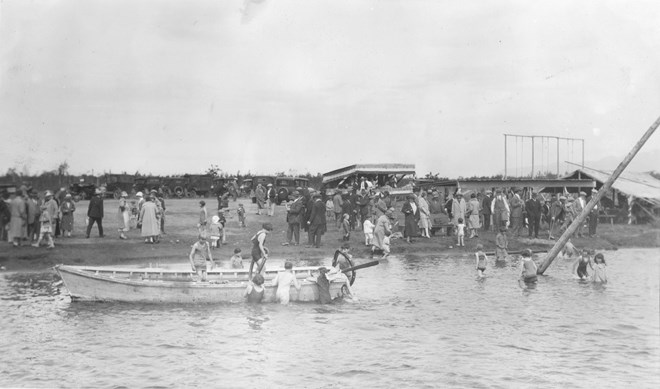 Although an early (and unsuccessful) homesteader named Thomas Jeter had originally built a cabin near a lake some miles south of downtown Anchorage, the lake was named after Joseph "Joe" Spenard when he built a winding road to it and began developing the area’s recreational potential.

2. Michael Carberry and Donna Lane, Patterns of the Past:  An Inventory of Anchorage’s Historic Resources (Anchorage:  Community Planning Department, Municipality of Anchorage, 1986): 199.

12. “Local Jottings about Town,” Anchorage Daily Times, June 26, 1916, 7.  Quoted from Michael Carberry and Donna Lane, Patterns of the Past:  An Inventory of Anchorage’s Historic Resources:  200.

24. Elizabeth A. Tower, Anchorage:  From its Humble Beginnings as a Railroad Construction Camp, 46-47; and Michael Carberry and Donna Lane, Patterns of the Past:  An Inventory of Anchorage’s Historic Resources: 199-200.

26. Elizabeth A. Tower, Anchorage:  From its Humble Beginnings as a Railroad Construction Camp, 47; and Rae Arno, Anchorage Place Names:  The Who and Why of Streets, Parks, and Places, 69.

32. Michael Carberry and Donna Lane, Patterns of the Past:  An Inventory of Anchorage’s Historic Resources: 200.