George H. Vaara served a single term as mayor of Anchorage (1940-1941) during a tumultuous period at the beginning of World War II.  During his term, the military build-up in Alaska led to an influx of new residents (thousands of U.S. Army and Army Air Force military personnel and civilian construction workers), soring rents, and acute housing shortages.  He withdrew from his race for re-election on March 29, 1941, after sending a radiogram from Seattle, Washington, indicating his desire not to participate in the April 1, 1941 general election.  William "Bill" Stolt succeeded him as mayor, defeating Anchorage Chamber of Commerce president Clyde R. Ellis by 148 votes as he totaled 569 to Ellis's 421.

George H. Vaara was born in Ada, Minnesota on May 26, 1899 to Norwegian immigrant parents, Auton and Ina A. Vaara.  He was baptized as Georg Helmer Vaara in the Evangelical Lutheran Church of America.  He grew up in Winchester, Norman County, Minnesota, where his father was a farmer.

The younger Vaara served nearly eight years in the U.S. Navy, enlisting on November 4, 1916 when he was seventeen, serving in World War I.  He was discharged from military service on September 20, 1920.1

After leaving military service, Vaara became a store manager for the Piggly Wiggly grocery store chain in Everett, Washington. In 1928 he opened a Montgomery Ward store in Yakima.  By 1931 he was a sales representative for Ernst Hardware of Seattle.

Vaara first arrived in Anchorage in 1933, where he worked at the Piggly Wiggly grocery store at 740 Fourth Avenue for more than three years.  He then opened a notions store, Vaara Varieties.  He operated this successfully for several years and, in 1943, acquired the Pepsi Cola franchise and built a bottling plant at the corner of 5th Avenue and I Street.  In 1937, he was elected to a three-year term on the Anchorage School Board and was appointed president.  On March 15, 1940, Vaara filed as a candidate for mayor of Anchorage and resigned from the school board to become eligible for the mayor's office.

On April 2, 1940, the forty-year old Vaara defeated William Stolt in a close race by a margin of 75 votes (486 votes to 411 votes) for a one-year term as mayor of Anchorage.  The Anchorage Daily Times reported that although Vaara had led slightly from the start, "there was never a time when his election could have been definitely determined."2  The Times also said that "voters went to the polls in an unexcitable election and cast 900 votes for city officials."3  George Vaara was sworn in as Anchorage's fourteenth mayor on May 2, 1940.

Vaara was elected mayor at a time when Anchorage was faced with an unprecedented period of rapid growth.  By 1939-1940, the military buildup in Alaska was underway as a reaction to a chain of events touched off by German conquests in Europe at the beginning of World War II.  After the Nazi occupation of the Low Countries (Belgium, the Netherlands, and Luxembourg) and the fall of France in June 1940, Congress appropriated construction funds for a military base in Anchorage after an earlier attempt had failed.  Anchorage's rapid growth had begun in 1939 after it was anticipated that Anchorage had been selected as the U.S. Army's military headquarters in Alaska due to its central air location, accessibility of the Alaska Railroad, close proximity to Cook Inlet and to port facilities (Whittier and Seward), and strategic location for the protection of the southern Alaskan coast and the Aleutian Islands.  On June 27, 1940, the first American troops arrived by train from Seward.  Within two years, the arrival of thousands of construction workers and wartime soldiers led to the growth of the city's population beyond anyone's expectations.  The population of the Anchorage bowl would more than double from about four thousand in April 1940 to nine thousand by mid-1943.4

Vaara went to work.  He urged close cooperation between the City of Anchorage, Anchorage Chamber of Commerce, and other civic organizations to face the problems, challenges, and opportunities military expansion brought the city and its residents.  On May 7, 1940, the Anchorage Daily Times reported on Vaara's address before the Anchorage Chamber of Commerce.  "There will not only be the normal growth of Anchorage to contend with but a very abnormal growth as well.  It is reasonably certain an air base will be constructed here. The highway to the States is a good possibility and other governmental improvements may come here. This will all be very trying for Anchorage in keeping pace.  The city council will not only welcome but will expect the cooperation of the Chamber of Commerce in solving the problems."5

The military buildup brought thousands of civilian construction workers to Anchorage, causing an immediate housing shortage. The increased population also put pressure on the schools, the streets, fire and police services, the water and sewer system, garbage removal, and created a need for more electrical generation.

On May 23, 1940, the City of Anchorage was charged with neglect for failing to install a chlorinator to purify the city's water supply.  Kaarrio Nasi, sanitary engineer for the Alaska Territorial Health Department, made this charge to Mayor Vaara and the City Council after previous recommendations had been ignored.  Repeated water tests showed the water supply to have been contaminated as much as one hundred percent above safety limits set by the U.S. Department of the Treasury.  The City Council approved funds to install a $1,000 plant to purify water at a cost of a few cents a day.6

In 1940, building construction hit an all-time record ($437,110) with an increase which was nearly three times that of 1939.7  In the newly developed areas outside the city limits, the construction of small homes was even greater than in the city.  On September 16, 1940, the Anchorage Daily Times reported that scores of families had purchased lots on the city's outskirts to build one-and two-bedroom homes.8  In October 1940, the size of the city was expanded to Seventh Avenue over the hill between M and N Streets ("now just a wilderness") so more houses could be built after local builders received approval from the City Council.9

Mayor Vaara and the City Council began working with federal civilian and military officials and Alaska territorial officials to develop facilities to meet the demands resulting from the arrival of Elmendorf Field officers and enlisted personnel.  In June 1940, Territorial Department of Health officials announced that a branch public health laboratory would be established in Anchorage to serve southcentral, interior and western Alaska.10  In July 1940, the City Council approved a cooperative plan with the U.S. Army and the Alaska Railroad to build a $400,000, seven-mile gravity water supply line (from Ship Creek to Elmendorf Field, with a branch line to Anchorage) to supply Anchorage with fresh, pure drinking water.11  In August 1940, Frank I Reed, president of the Anchorage Light and Power Company, announced plans to double the volume of electric power coming to Anchorage from the Eklutna hydro-electric plant.12  In October 1940, Territorial Governor Ernest Gruening and General Simon Bolivar Buckner, Jr., commander of U.S. Army troops in Alaska, announced the U.S. Army's plans to use Anchorage as a hub of a road system, with connections to Seward, to the Richardson Highway, Portage, and Gulkana.13   In December 1940 the Anchorage School Board submitted for approval various expansion plans to the City Council to accommodate the seven hundred additional school age children of both military and civilian families that were expected to arrive in 1941.14

In 1940, Anchorage resumed its long range sidewalk construction program to install sidewalks in all parts of the city after a three-year suspension.  The City Council announced plans to lay ten blocks of concrete walks in the residential section of the city in a one-to-three block area between F and K Streets.15

In July 1940, the City Council received a proposal to pave fifteen blocks on Fifth Avenue, for $2,160 per block, at a cost of $150 per lot for property owners.  In November 1940, the City Council raised the tax rate and proposed a $100,000 bond issue to pay for city improvements such as installing street lights, extending telephone service to outlying areas, replacing water mains, adding new sewers and sidewalks, and grading the unpaved streets.  The following month, the City Council approved the purchase of thirty-two modern specially constructed Westinghouse globe street light standards to complete the Fourth Avenue improvements for pavement and street lighting.

Vaara was elected mayor in 1940 as Anchorage began to boom because of the establishment of the large military post at Fort Richardson.  He was a member of the Anchorage Port Commission and the Employment Security Commission, a territorial agency in Juneau.  He was chairman of the United Good Neighbors, president of the first Lions Club and district governor for that organization. He was a member of the Masons, the Shriners, the YMCA and the American Legion.  He was president of the Anchorage School Board in 1939.

In 1958, Vaara announced his candidacy for the Republican nomination for governor of the new State of Alaska.  A few days later, he withdrew because of what the Anchorage Times described as “heated controversy between factions of the GOP leadership there.”  In 1958, he sold his interests in Anchorage and moved to Seattle, Washington.

George Vaara died in Seattle, Washington on July 26, 1976.  His widow, Mabel Louise Vaara, died on March 28, 1994, in Seattle.  Both were buried in Evergreen-Washelli Memorial Park in Seattle.  They were survived by their two daughters, Betty Louise Vaara Drumheller of Seattle, and Jean Alys Baily of Phoenix, Arizona. 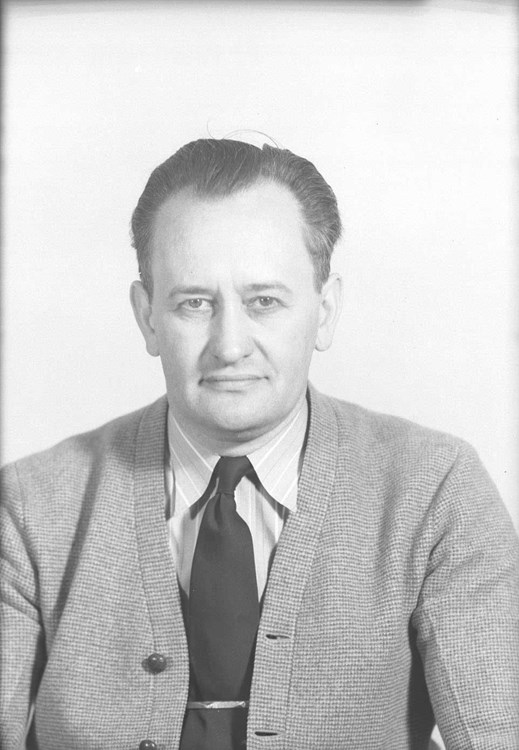 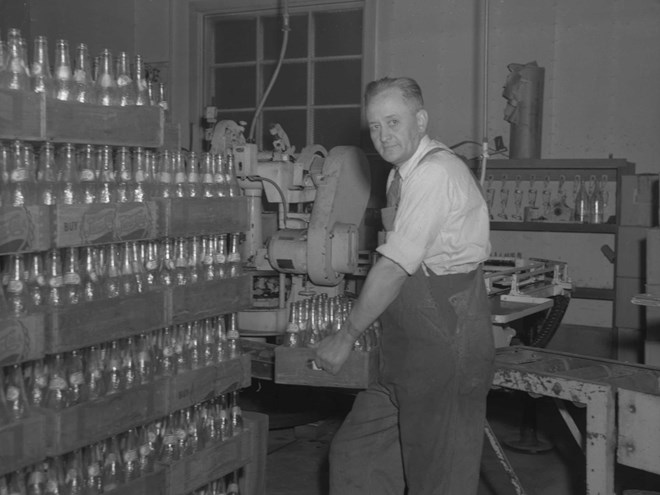 Besides the Vaara’s Varieties store, George Vaara and his wife Mabel also operated a soft drink bottling plant on the corner of Fifth Avenue and I Street. At the very least they bottled Pepsi-Cola, for which stacks of crated bottles are shown in this photograph. 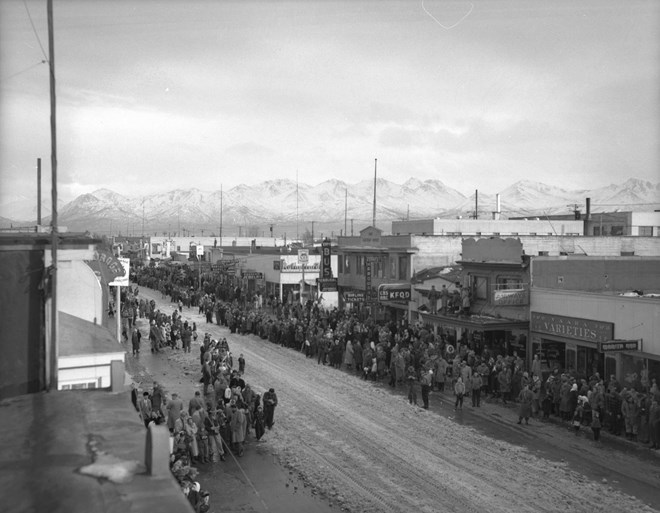 Vaara’s Varieties is shown on the right side of this photograph during a Fur Rendezvous sled dog race, possibly from the 1940s. 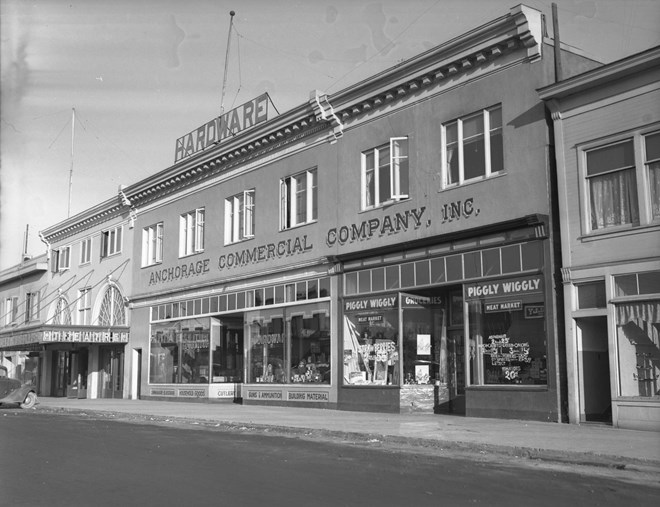 When George Vaara first arrived in Anchorage in 1933, he worked for Piggly Wiggly, a grocery store chain, but soon opened his own business, Vaara’s Varieties, which sold a wide variety of inexpensive household and personal items.