"L.J." (also known as “Osky”) Weeda was an Anchorage businessman and community leader. Weeda and his wife, Henrietta “Hank” Weeda, had a deep commitment to Alaska and the Anchorage community as a result of spending almost six decades of their lives here.

Luther Johan Weeda was born on a farm in Lynden Township, Washington on January 8, 1913, the last of seven children born to Dutch immigrants Cornelius Weeda and Hattie Vanhoogdalem Weeda.[1] He graduated from Lynden High School in 1929.

After traveling around the country in 1929, Weeda arrived in Anchorage, where he was hired as a cook for the Alaska Railroad. He then worked for his brother, Bert, at Bert’s Drug Store, located at Fourth and G Street in Anchorage. After working for his brother for a period, Osky left Alaska to attend the University of Denver’s pharmacy school. After graduating he returned to Anchorage to continue working with his brother at Bert’s Drug Store. He traveled on the Alaska Railroad on selling trips to the Matanuska Valley, and he and his brother, Bert, saw the need for a drug store in Palmer with the arrival of two hundred families from economically depressed parts of north-central Minnesota, Wisconsin, and Michigan to start farms in the Matanuska Valley as part of the New Deal’s Matanuska Valley project. In 1935, Weeda moved to Palmer to open a branch of Bert’s Drug Store; he lived in a tent during the establishment of the town.

On April 17, 1936, Weeda married Henrietta “Hank” Marsden on her twentieth birthday, in Seattle, King County, Washington.[2] Henrietta was born on a farm in Ontario, Oregon on April 17, 1916, the eighth of nine children of Horatio and Margaret Alice Marsden. The family moved to Seattle, where she graduated from high school in 1935. In the summer of 1935, she traveled to Anchorage and obtained work as a waitress with the Alaska Rural Rehabilitation Corporation (ARRC) in Palmer. Soon, she was working at Bert’s Drug Store in Palmer, where she met Luther Weeda. She returned to Seattle in November 1935 to be with her family, but continued her courtship through letters. After the Weedas were married, they moved to Alaska to live, work, and raise a family. The couple first lived in Palmer, staying in a tent behind the store and then in a three room apartment connected to the store.[3]

Henrietta “Hank” was active in social and service organizations in Palmer. She was the treasurer for the 1937 Palmer Fair, the forerunner of the present Alaska State Fair.

In the fall of 1937, Weeda's work in Palmer was finished and he went to Seattle to find work, but failed to find employment. He returned to Anchorage to work for the Reliance Grocery Company, and Henrietta “Hank” followed, working as a clerk for Vaara’s Variety Store on Fourth Avenue in Anchorage. In 1939, he was transferred by Reliance to Fairbanks to manage their office and warehouse. During World War II, he received an A-1 draft exemption because of his knowledge of the supply needs and lines of the civilian population in the area. After the U.S. entry into the war, he joined a home guard unit and patrolled Austin E. “Cap” Lathrop’s coal dump.

In 1942, Weeda was transferred to Anchorage by Reliance Grocery Company to work as their warehouse manager and salesman. The Weedas bought a home on Tenth Avenue in the area known as the “Army Addition,” as most of the houses had been first occupied by military officers and their families who had been transferred to the Lower forty-eight at the end of the Aleutian campaign. During World War II, Henrietta “Hank” Weeda was an American Red Cross nurse’s aide and worked at the original Providence Hospital at Ninth and L Street.

After World War II, Weeda left the Reliance Grocery Company and formed his own business, Sales, Inc., later renamed Osky Supply Company. He built a warehouse on Post Road in Anchorage, and sold restaurant and hotel equipment for over thirty years. Later in his career, he became president of the Food Equipment Distributors of America, a national trade organization.[4]

Henrietta “Hank” Weeda was a member of the First Presbyterian Church of Anchorage, Beta Sigma Phi, Anchorage Woman’s Club, and Eastern Star. She was charter president in 1958 of the Anchorage Emblem Club. In 1995, she was president of the Pioneers of Alaska, Auxiliary 4, Anchorage. Other interests were Alaska Crippled Children, Girl Scouts, Boy Scouts, Anchorage Concert Association, March of Dimes, Anchorage Senior Center, and the Older Persons Action Group. She was listed in Who’s Who in American Women and Women of the West. 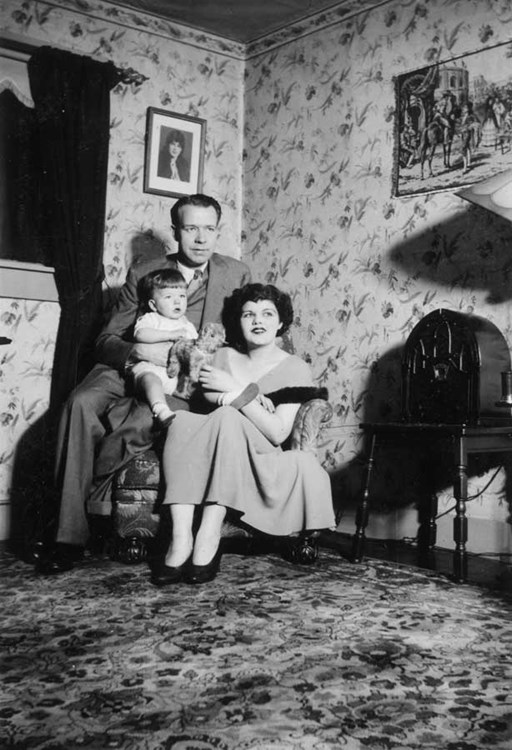 Bert and Nona Weeda with their son, Bert, in their well-appointed Anchorage home, ca. 1935. Burt Weeda was the brother of Luther "L.J." or "Osky" Weeda. 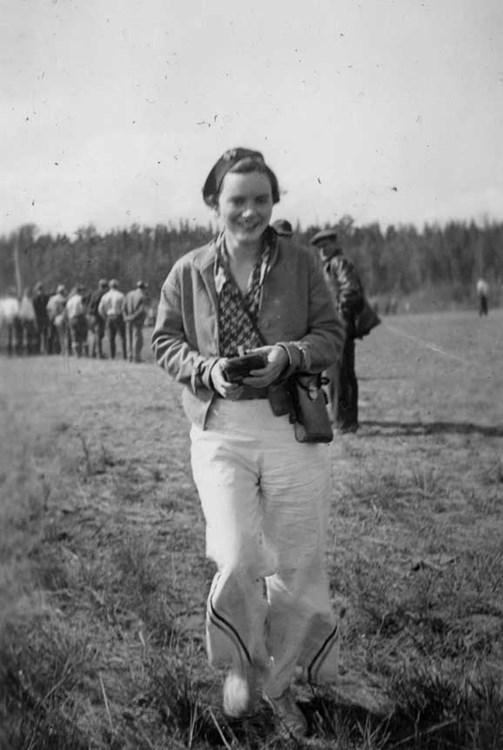 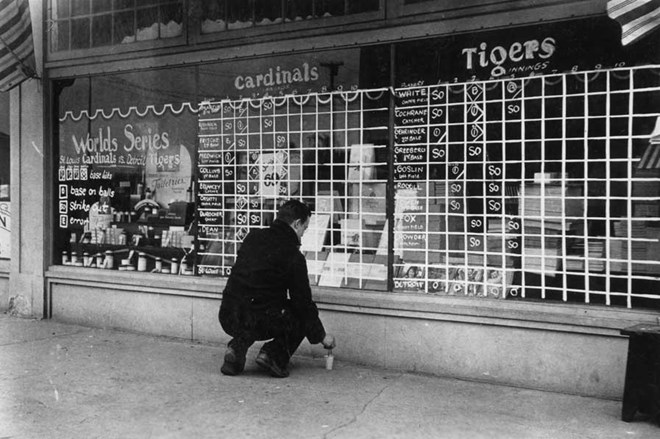 Bert’s Drug Store in Anchorage, showing the results of one of the 1934 World Series games between the Detroit Tigers and the St. Louis Cardinals. The Cardinals won the series, although the Tigers came back to win the 1935 series.

Luther "L.J." or “Osky” Weeda and Henrietta “Hank” Marsden, 1935, shortly after they first met, possibly on a camera club outing to Eklutna Lake, north of Anchorage. 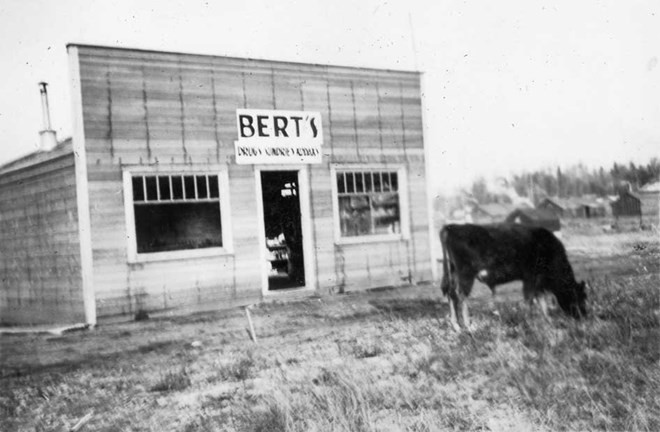 Bert’s Drug Store branch store in Palmer, Alaska, which was built by brothers Bert and "L.J." "Osky" Weeda in 1935, anticipating an increase in business because of the arrival of the Matanuska Colonists. The picture was taken by Henrietta ("Hank") Marsden, who noted in the photograph album “that wasn’t Osky” in front. 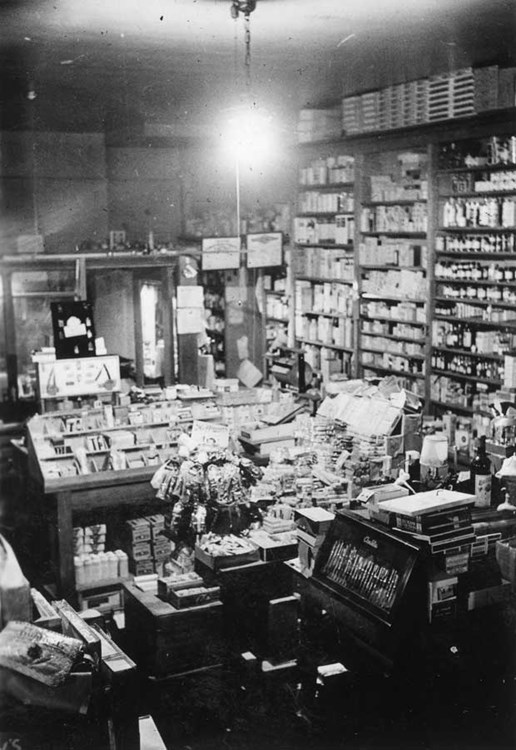