Martha Greer White, better known as “Mother White,” first became noted as the only woman from Washington State to receive the Gold Lifesaving Medal, the highest honor given by the Life-Saving Service of the U.S. Department of the Treasury, a forerunner of the U.S. Coast Guard. In 1892, this medal was bestowed on White for saving the lives of three sailors from the shipwrecked British ship, Ferndale, at the risk of her own life, during a storm north of Grays Harbor, Washington.  She went on to become a successful business entrepreneur and investor in Alaska. Her searches for the next opportunity took her to the Cook Inlet country in 1895, where she became perhaps its most widely known resident by establishing businesses in Tyonek, Ladd’s Landing, Hope, Sunrise and, finally, Ship Creek over a twenty-four year period.  In 1915, she established a tent hotel and restaurant in Anchorage, then called Ship Creek.  After the original Anchorage townsite was surveyed and platted, she built the White House Hotel on the city's commercial street, Fourth Avenue, between I and K Streets.

Martha Greer was born in Glasgow, Scotland on February 22, 1867.  Her birth occurred on George Washington’s birthday and, because of her mother’s great admiration for the United States, she was named Martha for Martha Washington.1  Martha either immigrated to the United States at the age of seven, when she arrived with her parents in New York or, alternatively, came to stay with her aunt at the age of fourteen.2  She married a Mr. Grove when she was a young woman, and had her first child, Robert, on January 11, 1884.  Her first marriage did not last and Martha moved to Patterson, New Jersey, where she met and married Edward A. White.  The family first moved to Texas for four years, then to the Washington coast to North Beach, Grays Harbor, Washington.3

While living in Grays Harbor, Martha White became famous for her action in saving three sailors from the English ship Ferndale.  Owned by the British firm of J. Henry Iredale & Co., the 1,270-ton sailing bark was caught in a gale and taken by the northeast current about sixty miles north of the Columbia River, to an area near the mouth of Grays Harbor, and then driven another fifteen miles north.  The ship was bound from Newcastle, New South Wales, for Portland, Oregon, carrying a cargo of coal and coke, consigned to the Oregon Improvement Company.  On the morning of January 29, 1892, at around 3:30 a.m., the ship was blown ashore on the breakers, several hundred yards offshore, just opposite the home of Martha and Edward White, near Copalis Beach.  Three of the crew reached shore by clinging to the mainmast of the wrecked ship. Twenty others, including the officers, were lost at sea.4  Martha, then twenty-five years of age, waded into the pounding surf to pull the exhausted sailors to the beach and then on to her home to recuperate.5

Martha White’s actions were documented in local newspapers, and caught the attention of the press, including the New York Times, San Francisco Chronicle, Portland Oregonian, Aberdeen Herald, and Hoquiam Washingtonian.  For her actions, she was presented with the Gold Lifesaving Medal from the Life-Saving Service, the highest honor given by this former federal agency, which later merged with the Revenue Cutter Service to form the U.S. Coast Guard in 1915.6  When the medal was ordered later that year, White requested that the inscription on the gold medal read “Martha White” rather than “Mrs. Edward White.”  It was sent to White in July 1892 with this inscription: “To Mrs. Martha White for heroic daring in rescuing three men from drowning, January 29, 1892.” A Portland newspaper described White’s efforts as:

" . . . an act of the noblest heroism on the part of a woman of inferior physical strength, unaided and alone, on a stormy and uninhabited sea-coast, that for the sake of humanity, for the sake of women-hood, for the sake of our own sex, should not go unnoticed, or, if it were possible, unrewarded." 7

As noted by historian Shanna Stevenson, her accolades did, indeed, continue.  Another gold medal was awarded to White by the citizens of Portland, Oregon, and the city’s chamber of commerce.  Later in life, in 1912, she was honored by Congress as one of six women to receive the “American Cross of Honor.”  This award was authorized by Congress in 1906 to recognize persons for rescues and those who had received life-saving medals.8

After receiving accolades, medals, and financial rewards, Martha and Edward White left Grays Harbor.  On May 14, 1894, the Whites relocated to Cook Inlet, settling at Ladd’s Landing or Station, primarily a fish saltery and Dena’ina Native village two miles from Tyonek.9  The accounts of Martha White’s life from her arrival in Cook Inlet to her setting up a hotel, the White House, in Anchorage in 1915, are sometimes contradictory.

At Cook Inlet around 1895, White’s daughter, Martha “Babe” White, known as “the first white child born in Cook Inlet,” was born at “Tyonik,” on July 21, 1894 or July 22, 1895.10  Mrs. Martha White established a mercantile business with the Dena’ina Indians, exchanging goods for furs.11  It appears that Martha had four children, with two dying in infancy.  Several other accounts describe Edward White as a commercial whaler who traveled to the Bering Sea and the Arctic Ocean.12

The autobiography of Albert Weldon Morgan, describes how he met a “Mrs. White” at the mining camp of Sunrise on Turnagain Arm in the summer of 1897.  Mrs. White told Morgan that she and her husband, Edward, were in Sunrise looking for work.  They had worked at C.D. Ladd’s fish saltery at Ladd’s Station or Landing (near the mouth of the Chuitna River) the previous year.  Later, Morgan found the Whites working for Fred Smith who was successfully mining on Lynx Creek, near Sunrise. Edward White was a laborer on the placer claim and Mrs. White was the camp cook.13

Fred Smith hired Edward White to be the caretaker for the mine over the winter of 1897-1898.  Morgan later heard that Mrs. White accompanied Smith to San Francisco, and remained with him after their return from California, apparently leaving her husband.14  Morgan believed Mrs. White married Fred Smith and that the couple kept Smith’s mining claim on Lynx Creek, and bought a saloon in Sunrise.15

In February 1900, a legal notice was published in a San Francisco newspaper listing a divorce action for Edward White against Martha White for desertion.16  Martha may have married Smith by 1903,17  O.G. Herning, then staying in Valdez, wrote a diary entry for October 26, 1904 indicating a “Mrs. Smith White” was traveling to the U.S. District Court at Valdez in November 1904.18  Finally, a decree of divorce was granted to Martha White against the plaintiff, Fred Smith, according to a notice published in the December 8, 1904 Alaska Prospector (Valdez).19  Smith later froze to death while prospecting in the Copper River country. Mrs. White remained in Sunrise to run the couple’s businesses, including a hotel or boarding house.20

While at Hope, White made a trip “to the states” to visit her children, who were in boarding school.  Before leaving, she sewed for safe-keeping while traveling, “$50,000 in currency—the cheechaco [cheechako] money—in her skirt.”21

Martha White arrived at Ship Creek early in 1915.  She brought supplies and set up two large tents, one as a restaurant, and the other as a hotel.  When the auction of town lots took place on July 10, 1915, she bought a parcel of land on Block 30, Lot 8, for $480,22 and then built a two-story hotel, “The White House,” located on Fourth Avenue, between I and K Streets.23

Martha White’s fluctuating financial situation was exacerbated by her generosity.  She grubstaked many prospectors.  In her funeral oration regarding White, printed in the Anchorage Daily Times on February 13, 1919, Mrs. Ula Thompson stated: “for years past, no one seeking aid was ever turned away by “Mother” White, whether the applicant was deserving or otherwise.”24

The first new track laid for the Alaska Railroad in 1915 was a temporary spur line to carry supplies leading from the beach near Ship Creek prior to an ocean dock being built.  Supplies and equipment were unloaded from ships to smaller boats that could pull up on the shore.  The supplies were then carried by this spur line to where the Alaskan Engineering Commission planned to build its workshops, warehouses, and roundhouse. Martha White’s daughter, Martha “Babe” White, was honored to drive the first spike.25  By 1916, Martha White’s son, Robert, had joined his mother and sister in Anchorage and worked at the hotel.26  On April 1, 1917, Martha “Babe” White married a prominent Seward citizen and merchant, Frank J. Cotter, later following him from Seward to South Africa and Japan.27

During World War I, White was greatly respected for her fundraising efforts on behalf of the American Red Cross.  In the late winter or early spring of 1918, she organized the “Days of 98,” under the auspices of the Order of Alaska Pioneers.  This wartime relief effort raised $2,000 for the American Red Cross.28

On February 2, 1919, Martha Greer White died after a long illness, reportedly from cancer.  A funeral service was held in Anchorage on February 12, 1919 in Pioneer Hall, which could not accommodate the scores of people who gathered near there.  In the eulogy address, delivered by Ula Thompson, president of the women’s auxiliary of the Pioneers of Alaska, she was called “Mother White” and remembered as an exceptional, heroic pioneer woman for her charitable and community-building activities, including raising funds for the American Red Cross and for ministering to the sick and needy.  As a sign of the community’s respect, local businesses of every kind--banks, stores, hotels, restaurants, pool halls, and cigar stands—were suspended for the hour of the afternoon of the funeral services.  More than one thousand people followed the cortege to Anchorage Memorial Park Cemetery, the largest gathering for any event in the city’s history.29

The Anchorage Daily Times, on February 3, 1919, editorized in its eulogy:

"Mrs. White was an exceptional woman, possessing all the best traits and characteristics of the pioneer settler of the frontier. She was brave, yet tender; keen in business; yet generous to a fault. She ministered to the afflicted, cared for the sick, aided the needy, cheered the downhearted, gave good counsel to those who came to her for advice, and was indeed a 'mother' doing her long and useful life, to the inhabitants of this remote area."30

Martha White is buried in the Pioneers of Alaska Tract of the Anchorage Memorial Park Cemetery.

As the second woman to receive the Gold Lifesaving Medal, White is remembered only through small coastal exhibits in Washington State museums.  Ida Lewis-Wilson, Keeper of the Lime Rock Lighthouse Station in Rhode Island, was the first woman to receive this medal in 1881, and has a lighthouse, Coast Guard cutter, and a natural landmark named in her honor. 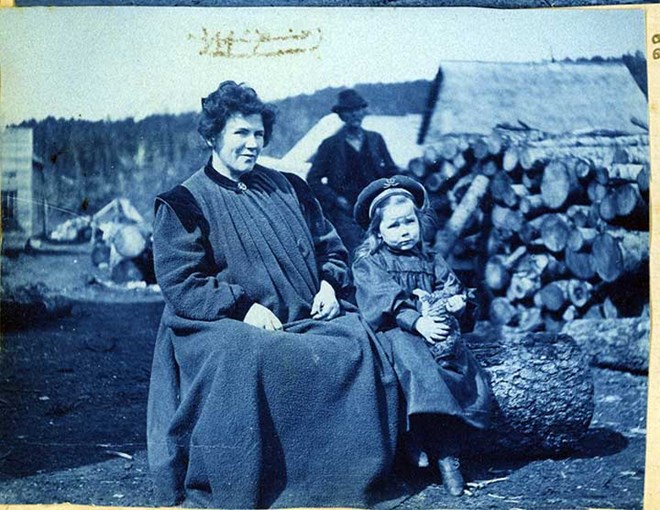 Martha White in the Sunrise area of Turnagain Arm area in 1898 with her daughter, Martha, known usually as “Babe.” The photograph was taken during Captain Edwin F. Glenn’s expedition to Cook Inlet looking for a route into the interior gold fields. 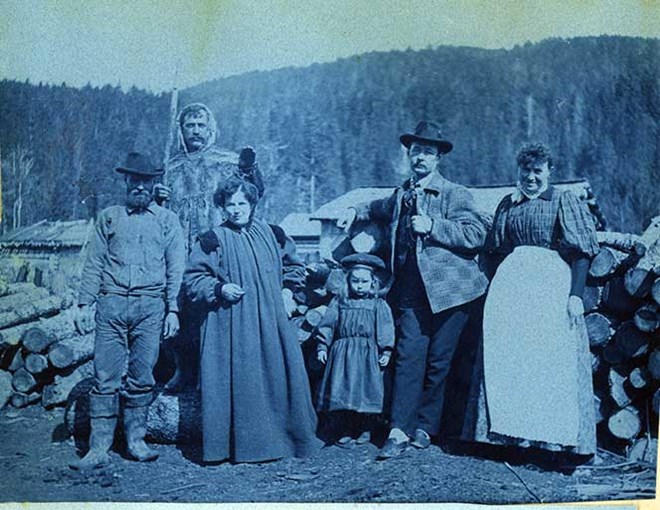 Martha White among the “Notables of the Sunrise Hotel” in 1898. Photograph taken during Captain Edwin F. Glenn’s expedition to Cook Inlet looking for a route into the interior gold fields. Martha White is the third person on the left; next to her is her young daughter, Martha "Babe" White. 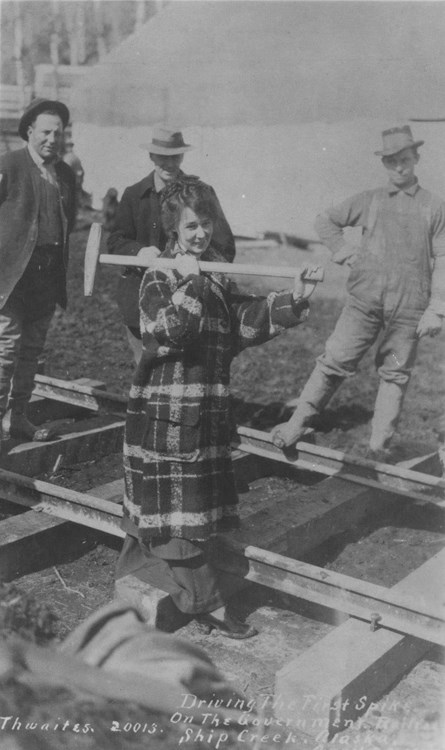 Martha’s daughter, named Martha after her mother but usually known as “Babe,” is shown here driving the first spike on a spur line of the Alaska Railroad on April 29, 1915. This line was built to carry supplies from tidewater at Ship Creek to where the railroad workshops were to be built. 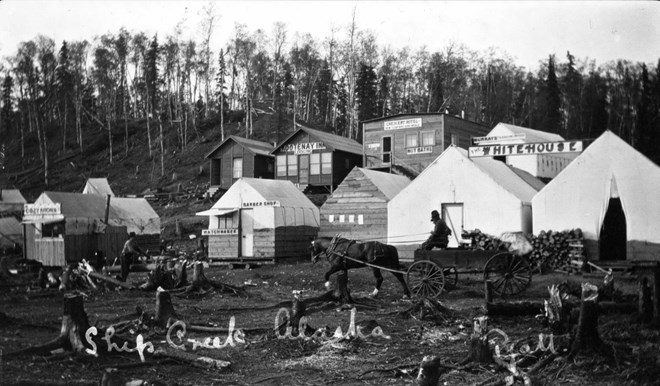 In 1915, Martha “Mother” White moved to the mouth of Ship Creek in expectation of the construction of the Alaska Railroad. With her she brought two large tents; one functioned as a bunkhouse, the other as a café. 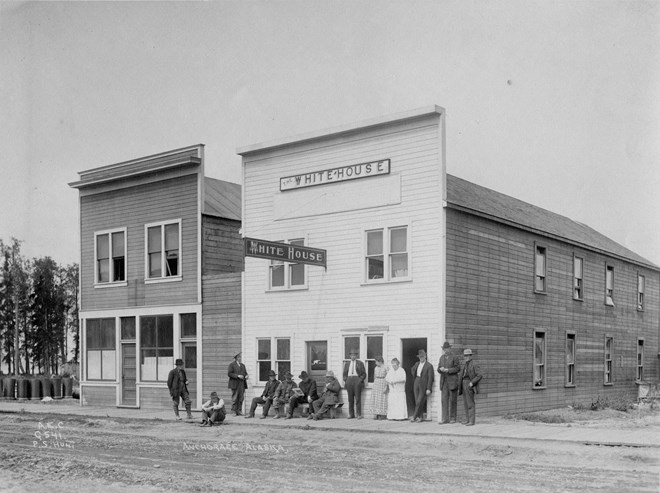 Martha “Mother” White bought a lot in the new townsite of Anchorage in 1915 and built a wooden frame hotel, the White House. Later she purchased the adjacent wooden building as an annex to the hotel.