John Dorn “Bud” or “J.D.” Whitney and his wife Daisy Olive Kincaid Whitney were among the first non-Native residents at Ship Creek, arriving in May 1911.  They joined the Jim St. Clair family as one of the first two non-Native families to settle in the area that would later become Anchorage.

Before settling in Ship Creek, the Whitneys lived across the Cook Inlet in the town of Knik.  Apparently, Whitney established a homestead cabin in the vicinity of Knik in the spring of 1910.1  Knik once served as the largest and busiest trade center on Cook Inlet for local miners, trappers, freighters, and a few homesteaders from about 1898 to 1917.2  Knik’s importance diminished when the Alaskan Engineering Commission (AEC) selected a route for the Alaska Railroad that bypassed the town and then established a construction camp at Wasilla.

Whitney and his wife, Daisy, came to the mouth of Ship Creek on May 5, 1911.3  Whitney prospected for gold and freighted for the miners in the nearby Willow Creek Mining District.

In 1914, the Whitneys moved about four miles up Ship Creek, where there were only a few settlers living in the area.4  They filed a legitimate homestead application to a 160-acre parcel of land. They supported themselves entirely by cultivating a garden, raising livestock, and hunting.  They became the first homesteaders to settle on what became Fort Richardson, approximately where the Boniface gate to Joint Base Elmendorf-Richardson is today.  Their “ranch” (as homesteads were called then) later became a popular terminus for hikers and picnickers before the era of paved roads and highways.

In summer 1914, teams of surveyors landed at Ship Creek to establish the route for the Alaska Railroad to be built into the Interior by the federal government.  Whitney hired on to guide the surveying parties.  In 1915, when the Ship Creek became the field construction headquarters for the Alaska Railroad, the Whitneys raised Duroc hogs and sold the meat to railroad workers.  The Anchorage Weekly Times for September 26, 1917, noted that Whitney’s fed their pigs “sweet peas” that grew well near Ship Creek, and that they would shortly bring sixty “fine hogs” to the Anchorage market where the meat was expected to sell for the “high cost” of twenty-five to forty cents per pound.

By the spring of 1915, as Anchorage was being founded, homesteading had barely started in the area. The real boom in the Anchorage Bowl area did not start until railroad construction was well underway.5

John D. "Bud" Whitney was born in 1866 in Butler County, Iowa, one of six children born to James Whitney and his wife Maggie.  He spent his boyhood days in Deadwood in the Dakota Territory, working as an underground placer miner with his father.

In the 1880s, at the age of seventeen, Whitney became a cowboy for the next seven years, punching cows for the Hash-Knife and D.H.S. outfits.  On the Little Missouri River, he came upon a young bachelor, Theodore Roosevelt, building a cabin and used his saddle horse and lariats to lift the last logs into place.6  He participated in a cattle drive in 1886 over the ‘Long Trail’ from Montana to Texas and back.  After he reached his mid-twenties he returned to mining, working in Montana, Idaho, Washington State, and British Columbia.7

John D. "Bud" and Daisy Whitney both came to Alaska during the 1890s and lived in various mining camps before joining the St. Clairs at Ship Creek in 1911.  Whitney arrived in Alaska in 1898, arriving aboard the schooner Louise J. Kenny at “Kiketarik mission”8 or Kiketarik Mission9 (later known as Kotzebue).  In 1901, he married Daisy Kincaid, whose family was from Ashland, Oregon, in the mining town of Candle.

When Whitney arrived at Kiketarik Mission, he was one of a party of twelve gold prospectors.  He partnered with Gus Shaser and wintered along the Selawik River. On returning to the coast in the spring of 1899, the pair encountered the schooner Elk No. 1, which had also overwintered.  Many of the men aboard were sick from scurvy and several were dead.  Whitney proceeded to Kiketarik Mission.  He found prospectors not suffering from scurvy or “black leg” had either left or were preparing to leave Kiketarik Mission to go to Anvil Creek, where a gold strike had been reported.  The Anvil Creek strike in the summer of 1898 was one of the biggest in Alaska mining history and led to the founding of Nome in 1900.  Whitney and Shaser persuaded several men to accompany them back to the Elk No. 1, where they found only four men still alive. Whitney and the rescuers decided to take the Elk No. 1 downriver to the coast, where they encountered the U.S. Revenue Cutter Bear.  The officers of the Bear initially suspected Whitney and his party as being thieves who had stolen the Elk No. 1.  After clearing themselves, Whitney’s party was given permission to take the Elk No 1 on to either Nome or St. Michael. They went to Nome.10

In Nome, Whitney unsuccessfully worked several mining claims.  By the winter of 1899, he had reportedly become the “manager” of all claims belonging to the North American Transportation and Trading Company. He left this position in 1901, when a gold strike was reported at Candle, inland from the northeast coast of the Seward Peninsula.  Whitney moved to Candle, where he managed Sam Pepper’s claims until 1903.  In 1904, Bud and Daisy Whitney traveled on the U.S. Revenue Cutter Corwin to Siberia and then to Nome, where they mined for five years.11

In 1910, the Whitneys were in Seward, where they built a small boat to descend the Kenai River to its mouth.  The Whitneys wintered at the village of Kenai, and then on May 5, 1911 they landed at Ship Creek. Daisy later remarked, “All we could see was trees when we first arrived in what is now Anchorage.”

Under the Homestead Act of 1862, the federal government made free land in the western states or territories available to homesteaders willing to live on the land for five years, develop the land for agriculture, and build a suitable residence on the land.  The law allowed anyone over the age of twenty-one, the head of a family, or a U.S. citizen (or having the intention of becoming a citizen) to homestead 160 acres or less of land in the public domain that was suitable for farming.  After five years, if these requirements were met, the homesteader was given a patent or full ownership, to their parcel.13

In Alaska, homesteaders faced severe conditions—intense cold, dark winters, and isolation.  The Homestead Act of Alaska of 1898 (30 Stat. 409) made homesteading easier to encourage settlement and to develop the territory.  In 1898, the law was amended to allow for up to 320-acre homesteads but, in 1916, the maximum homestead size was reduced to 160 acres.  In 1912, the law was amended to reduce the time necessary to receive a patent from five to three years, which was applied nationally.14  The law also stated that after the third year, one-eighth of the land had to be under cultivation and a suitable residence built.  There was a diminished residency requirement to live on the land continuously for at least fourteen months.  Another option was for the homesteader to purchase the land by paying $1.25 per acre.

In Alaska, the real problem confronting homesteaders was clearing the land.  The greater portion of the land in the Anchorage Bowl was heavily wooded.  Methods employed by settlers like the Whitneys were various and crude.  Trees had to be cut down and the logs and debris removed. Stumps had to be either pulled out using a team of horses or, if horses were not available, either burned or pulled out with a muscle powered windlass.  Once the land was cleared, sometimes a thick layer of moss, laced with tree roots, had to be removed.15

After the completion of the Alaska Railroad, the Whitneys lived a quiet and peaceful life on their homestead until 1935, when they moved into Anchorage.  John D. "Bud" Whitney accepted a position with the Alaska Road Commission.  In 1938, he became a custodian in the new Anchorage City Hall and acted as jailor for the city's prisoners.  Daisy Whitney acted as matron if there were female prisoners, and she did the cooking for the inmates.  The Whitneys moved into a small apartment in the building.  Their jobs as jailors became much busier when the construction of Fort Richardson beginning in mid-1940 brought thousands of rowdy construction works to town and many of them to jail.16

During the military build-up at the beginning of World War II, their homestead was included within a twelve square-mile area north and east of Anchorage set aside for military purposes, and construction of Elmendorf Field and Fort Richardson.  In 1941, the Whitneys sold their homestead to the federal government for $5,100.17

In 1945, the Whitneys decided to move to Arizona after forty-seven years of life in Alaska.  Before they left, John D. "Bud" Whitney said: “We plan to remain Outside permanently, but if I can’t learn to talk fancy the way folks in the states do, I guess I will be back before long.”18

John D. "Bud" Whitney died on July 29, 1955 in Ashland, Oregon.  His wife Daisy died there in 1979, at age ninety-eight. They are buried in the Mountain View Cemetery at Ashland, Oregon.

The Whitney Section House, an early building in the history of the Alaska Railroad, was named after John Dorn “Bud” Whitney, as it was a railroad stop north of Anchorage near their homestead.  In 1978, the Whitney section house was moved to prevent its destruction, and moved again in 1992 to the Museum of Alaska Transportation and Industry in Wasilla.  The section house is about thirty miles north of its original location.  In 2004, the building was placed on the National Register of Historic Places.  Whitney Road, one of the original roads in Anchorage, was named after the Whitneys.19 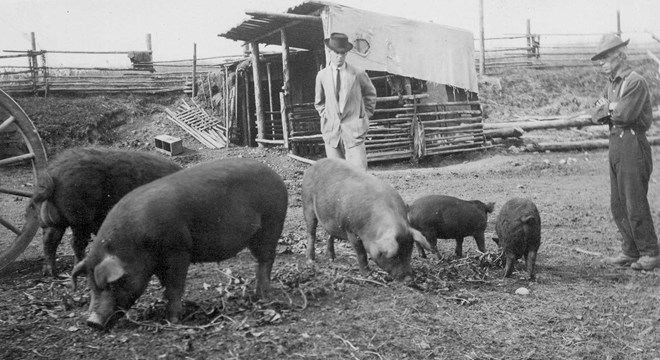 John D. "Bud" Whitney looking at several of his pigs. Although the couple were looking for solitude when they homesteaded along Ship Creek, the sudden development of Anchorage provided them a solid market for their hogs. 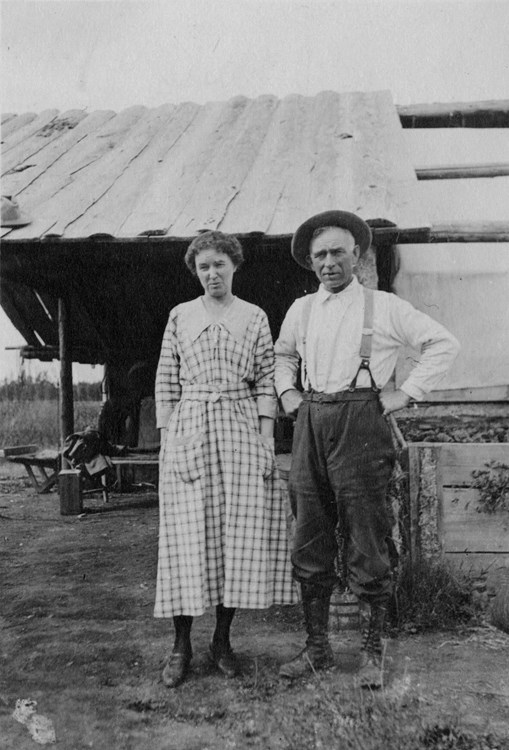 John D. "Bud" and Daisy Whitney probably at their homestead, which stood near the Boniface Parkway entrance to Fort Richardson, near Ship Creek. 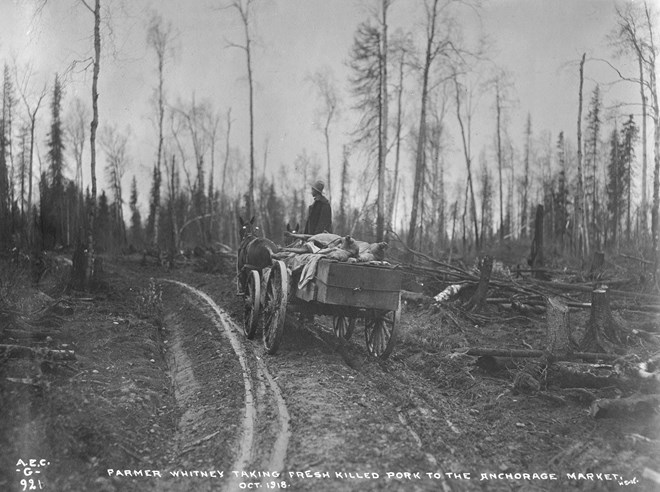 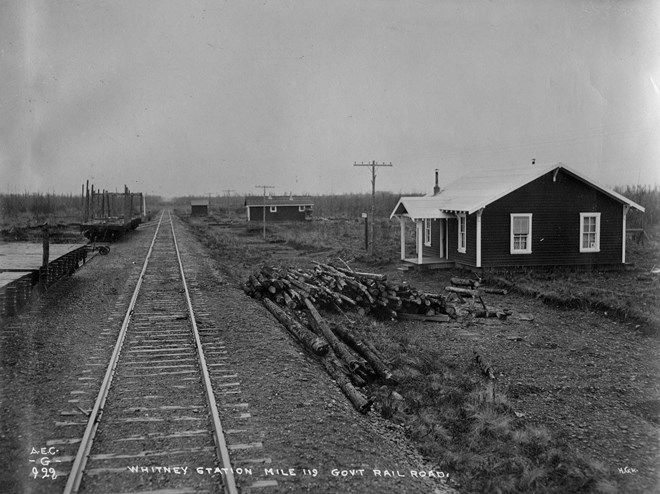 Whitney Section House, built around 1917 on the Alaska Railroad and named for the adjacent Whitney homestead near Ship Creek, located about five miles from Anchorage. The building was later moved to the Alaska Museum of Transportation and Industry in Wasilla. 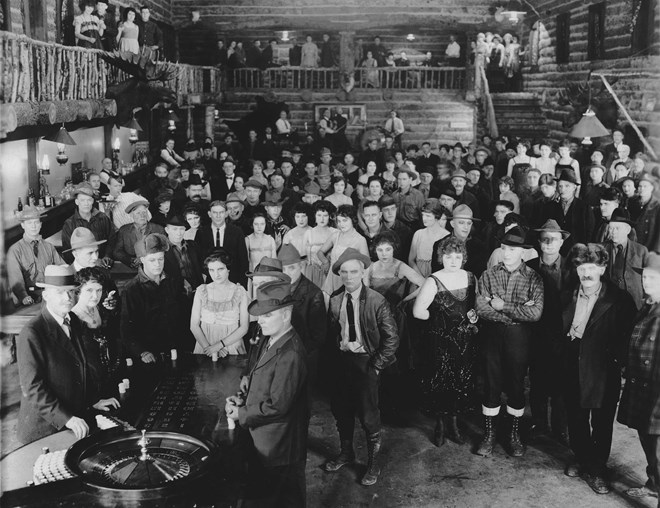 The Whitneys, like many Anchorage residents, were extras for some of the crowd scenes in Austin E. “Cap” Lathrop’s 1923 Alaska movie production “The Chechakos.” This photograph lists Bud Whitney as the man in the center front with an open leather coat, squared off tie, and laced knee boots. Daisy Whitney is listed as the woman in the dark dress standing next to the roulette table on the left side of the image.