Raymond G. “Ray” Wolfe was an Anchorage businessman and civic leader. He served on the Anchorage City Council in 1942 and 1943.  He was a volunteer fireman. Wolfe served one term as Anchorage mayor in 1944 and 1945.  During his time in office, the mayor and six councilmen were business owners and handled city business in their spare time.

Raymond Wolfe met Esther Heverling in Anchorage in March 1932, and they were married in March 1934. Prior to his marriage, he was a member of the first Anchorage Volunteer Fire Department.1

Esther Heveling was born in Vernonia, Oregon on August 5, 1903.2  She became a registered nurse, working at Swedish Hospital in Seattle, Washington prior to coming to Alaska in 1931 with her sister, Ruth Dodd. Esther then worked for both Dr. J.H. Romig and Dr. A.S. Walkowski from 1931 to 1933 in the Alaska Railroad Hospital.  Esther was superintendent of the Sunday school at Anchorage’s First Presbyterian Church.  She was also active as an honorary Girl Scout leader and member of the Eastern Star, the Anchorage Woman’s Club, Rotary Anns, Pioneers of Alaska Auxiliary 4, and the Mother’s Club.3

Wolfe came to Anchorage in 1927 to work with his uncle, Henry Wolfe, and partner, Henry Pope, in the sheet metal shop called the Pioneer Sheet Metal Works at Fifth Avenue and C Street.  Henry Wolfe bought the corner lot at Fifth and C Street in a town lot sale on August 10, 1915 for $550.  He erected a one-story building to display the goods he and his partner made in a tented sheet metal shop at the rear of the lot.4  This location was not in the prime downtown business district in 1915, which was then bounded by Third and Fourth Avenue on the north and south and by B Street and C Street on the east and west.5

Their sheet metal business prospered and Henry Wolfe began investing in Seattle real estate.  In 1931, Henry’s interests in Seattle demanded much attention, and he sold out his lot to his partner, Henry Pope, and moved to Seattle.  Raymond Wolfe continued to work for Pope, and eventually saved enough to purchase the Pioneer Sheet Metal Works shop from him in 1936.6

Several years later, Wolfe tore down the original structure and replaced it with a two-story combination apartment and store building. His twin brother, Robert Wolfe, joined in the ownership in 1942, along with other partners.  The business developed into Wolfe’s Sheet Metal, Hardware & Plumbing Company, then into Wolfe’s Furniture, then to Wolfe’s Department Store, and finally, in later years, into Wolfe’s Furnishings.7

The opening of the Pioneer Sheet Metal, Hardware & Plumbing Company on December 18, 1944 on Fifth Avenue and C Street was a significant event in the city’s commercial development.8  Before this time, it had been considered economic suicide to start a business anywhere except on Fourth Avenue.  On December 18, 1944, the Anchorage Daily Times commented in an editorial (“A Two-Street City at Last”):

"The opening of the new Ray Wolfe building at Fifth Avenue and C Street is a signal event for Anchorage. The investment of many thousands of dollars in this fine structure is a concrete demonstration of a young man’s faith in the future of Anchorage.  The building sets the pace for future business construction, marking the end of the era of temporary structures and the beginning of what may be expected to be a period of permanent construction.  It also marks a shift of the business building from Fourth Avenue over to Fifth, something which has been urged and discouraged for many years."9

Fifth Avenue became a significant business thoroughfare when the Glenn Highway was completed in 1943 and Anchorage was connected to the Richardson and Alaska Highways.  Drivers entered Anchorage on Fifth Avenue as Fourth Avenue led into Elmendorf Air Force Base (now Joint Base Elmendorf-Richardson).10

Wolfe served as mayor at a time when World War II had brought dramatic changes to Anchorage and other parts of Alaska.  The war transformed Anchorage from a remote, isolated, sleepy little railroad town into the largest and fastest growing city in Alaska.  It would become a modern city--the political, economic, and military center of Alaska.  In 1940, Anchorage had been selected as the U.S. Army’s military headquarters in Alaska due to its central air location, close proximity to Cook Inlet and to port facilities (Whittier and Seward), and strategic location for the protection of the southern Alaskan coast and the Aleutian Islands.

The military buildup and the war itself had brought tens of thousands of military personnel and construction workers to Alaska.  Major changes had taken place with the massive construction of Fort Richardson and Elmendorf Army Air Base.  The population of Anchorage had more than doubled from about 4,000 in April 1940 to more than 25,000 by mid-1943, a phenomenal growth in less than three years.  The rapid, sudden, and continuous population increases created problems and challenges for the city.  Anchorage was overwhelmed by the war and the population boom created an immediate housing shortage.11  There were also immediate needs for more schools, roads, improved police and fire protection, increased capacity for sewage and garbage disposal, and expanded facilities to generate more electricity.12  These problems caused by the city’s rapid expansion would continue into the Cold War boom period, which lasted until the mid-1950s.13

According to the Anchorage Daily Times, Wolfe emerged as a candidate after George Mumford withdrew as a candidate for mayor.  As a federal employee, Mumford was forbidden to run under the terms of the Hatch Act.16

The City Council approved the largest budget in Anchorage history, $883,657, on April 27, 1944.  In November 1944, Mayor Wolfe reported that the costs to run the city had more than doubled since 1942, with the major expenses for schools, garbage, health, and parks.  To help raise additional revenue, property taxes were raised for the first time in three years.17  In June 1944, Mayor Wolfe appointed a Post-War Planning Committee to draw up three post-war plans for the city’s development.18

In 1944, the Anchorage school superintendent, J. Lester Minner, reported that schools were congested beyond their capacity.  School enrollment was 917 students in the grade school, which meant crowding 713 students in the grade school and the remaining 204 in the high school.  Enrollment at Anchorage High School had increased to 204 students, up from 167 the previous year.  The Anchorage public school system had no gymnasium, a facility which was needed to maintain its rank as an accredited high school.

In a July 14, 1944 special election, voters approved a $200,000 school bond issue to construct and equip a gymnasium, nine classrooms, and a lunchroom for the Anchorage schools.  In June 1941, the same proposition had failed by two votes when hundreds of taxpayers failed to vote, crippling the schools for the next three years.  Even with the new facilities, the Anchorage School Board announced that they would be required to rent all available churches, lodge halls, and other buildings for classroom use.19

Other developments included the opening of the long-planned Anchorage Health Center, a three-story structure on the corner of Second Avenue and E Street built with funds from the Federal Works Agency.20  In October 1944, the City Planning Committee announced a “three-fold” development program for Merrill Field, which called for the completion of a north-south runway, the erection of an administrative building, and the construction of a diagonal runway extending from the northeast to southwest portions of the airfield.21

In September 1944, the first annexation of a suburban area, known as the South Addition, doubled the city’s population.  In general, this included the area from C to L streets south of Eleventh Avenue to Boundary Avenue.

On April 6, 1945, Raymond Wolfe was defeated for re-election as Mayor of Anchorage, losing to former city attorney John Manders.  Manders won the contest with 660 votes as against 330 for Wolfe.22

In Anchorage, All-America City (1957), Evangeline Atwood, stated:  “The sudden growth in population placed a strain on the city’s services.  First to be recognized was the need for better municipal management. The city’s business was getting too big for a mayor and six councilmen to handle in their spare time.”23 Agitation also grew for a city-manager form of local government and for the approval of the first set of zoning ordinances, which would not be approved by voters until the spring of 1946.

After leaving the mayor’s office, Wolfe became involved in mining, politics, and continued his interest in civic and community activities.  In 1954, he became secretary-treasurer of the DeCoursey Mountain Mining Company, Inc., which operated the Red Devil Mine and mercury production facility on the south bank of the Kuskokwim River, near Sleetmute (Cellitemiut), in southwest Alaska.  After more than a year of prospecting and development work, a rich vein of cinnabar ore was struck at the site, which insured year-round operations at the only mine producing mercury in Alaska.  Cinnabar is the raw form of mercury.  Wolfe eventually became president of the Alaska Mines and Mineral Company, which evolved from the DeCoursey Mountain Mining Company.24  Mining occurred at the Red Devil Mine site from 1933 to 1971, yielding approximately 35,000 2.5-quart flasks of mercury.25

On September 8, 1958, Wolfe was defeated in the general election for a two-year term in the new Alaska State Senate, representing the Anchorage-Palmer District.  J. Earl Cooper, a Democrat from Spenard, won the contest with 9,142 votes as against 6,985 for Wolfe, who ran as a Republican.26  He ran unsuccessfully for U.S. Senate in 1960.

Ray Wolfe served on the Anchorage Planning Commission, the Off-Street Parking Commission, and on the national board of advisors for the Small Business Administration (SBA).  He was active in the Elks Lodge, the Alaska Shrine Temple, the Anchorage Rotary Club, the Pioneers of Alaska, and the Presbyterian Church.28

Raymond G. "Ray" Wolfe died in Anchorage on October 5, 1977, after suffering a heart attack.  On April 6, 2006, his widow, Esther Wolfe, died at the age of 102.  The couple are interred in Angelus Memorial Park in Anchorage.  They had two daughters, Patricia Ann Wolfe Kaufman and Roberta Ray Wolfe Mabey.29 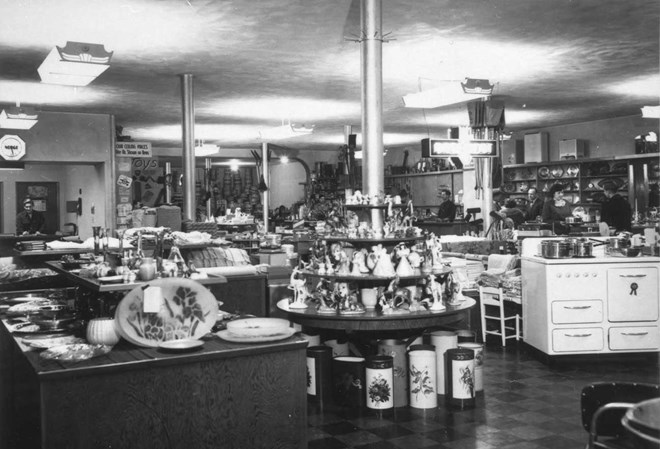 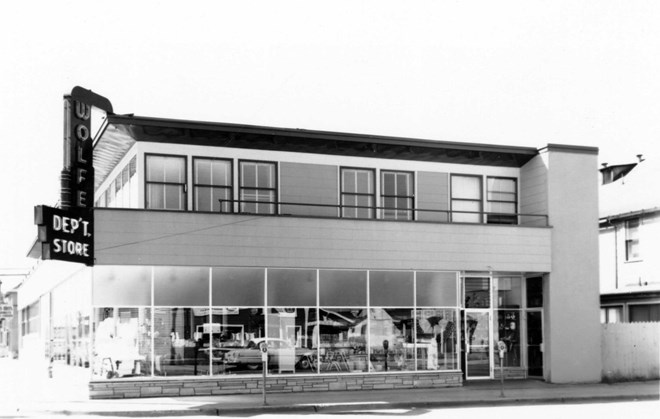 View of the exterior of Wolfe’s Department Store after it was remodeled. 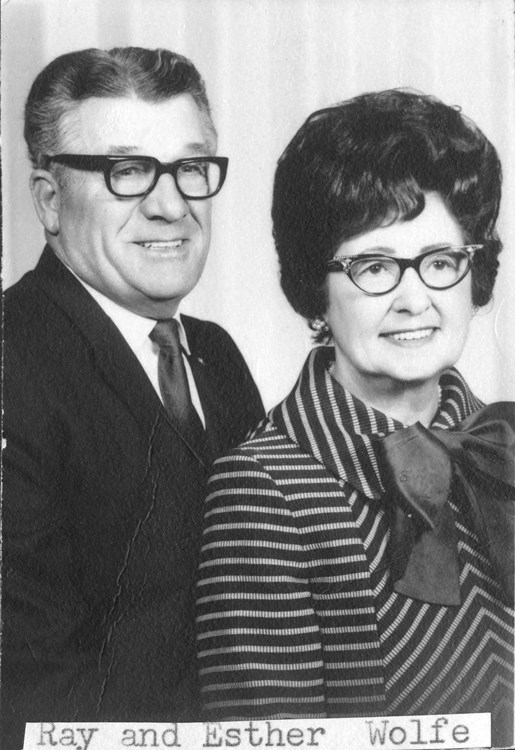 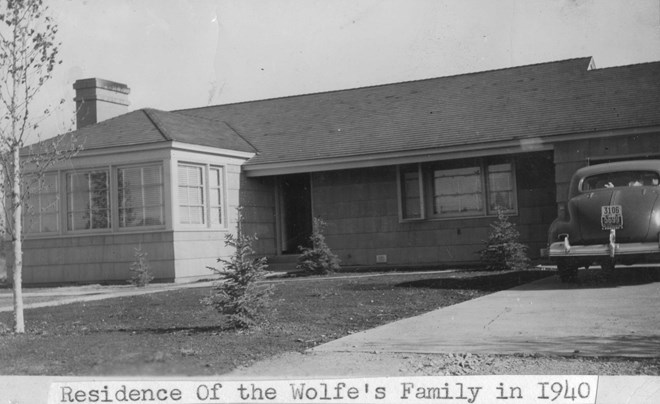 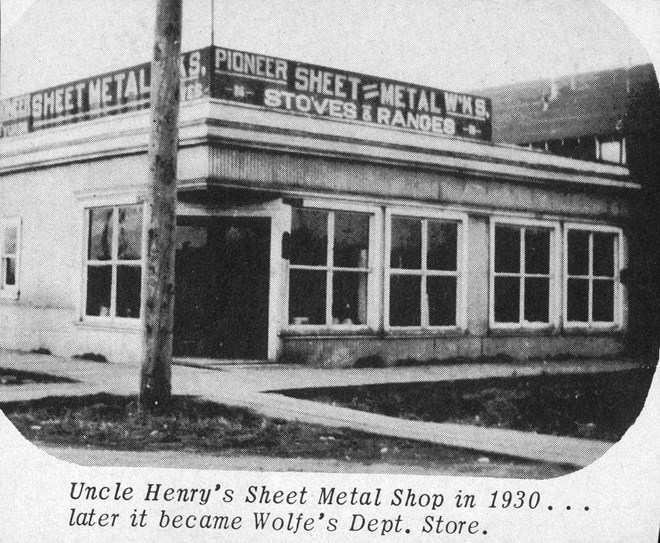